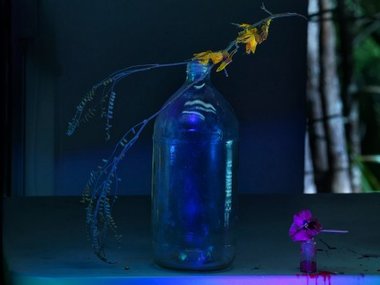 In this show we have the glowing theatrical colour and Pardington's contemporary versions of Dutch vanitas compositions using plastic skulls, crystalware and wilted flowers, which also include amongst other things, feathers, sex toys, sparkling bottles, shells, money, bracelets, and allegedly McCahon's sherry flagon, garden flowers and butt filled ashtray. But it is terribly corny all this, cheesy ‘touch the hem of His garment' stuff that with the garish lighting pretends to be ironic.

Fiona Pardington
An Answering Hark: From the McCahon Artist’s Residency 2013

In this set of a dozen recent Fiona Pardington photographs we see her push the envelope of artifice, overtly mingling her own history with that of McCahon by using not only her Titirangi residency in the title but occasionally constructing images that reference his life at this site of production. A common enough careerist strategy you might think, it’s all up for grabs; artists can use any cultural icon they like from Art History to further their own advancement, especially if it involves a residency and an exhibition.

I can’t help it. I’m a little squeamish about necrophilia. I remember in 1989, living in Christchurch and reading about Tina Barton’s curated exhibition for Auckland Art Gallery called After McCahon, a show hot on the heels of the survey of large works, Colin McCahon: Gates and Journeys (November 1988 - February 1989) and being very impressed with not only Barton’s concept but also the wit of some of the artists, especially Merilyn Tweedie and the title of her series Under McCahon. Perhaps now, almost twenty-five years later, Pardington represents McCahon payback time. Except somehow it falls flat.

In this show we have the glowing theatrical colour and Pardington’s contemporary versions of Dutch vanitas (memento mori) compositions using (overtly) plastic skulls, crystalware and wilted flowers, which also include amongst other things, feathers, sex toys, ornamental bottles, fruit, shells, money, letters, bracelets, and allegedly McCahon’s sherry flagon, garden flowers and butt filled ashtray. But it is terribly corny all this, cheesy ‘touch the hem of His garment’ stuff that with the garish lighting pretends to be ironic. It’s not a snigger. It’s too earnest and pompous for that. Pardington has done much indisputably great work over the years but this is tacky and self serving.

However if we forget the silly, highly self conscious, McCahon references Pardington’s images become more interesting on other levels. She has broadened out the vanitas concept to bring in ecological and family themes, pitching the themes to some extent to the popular global mood of the moment. Yet for me the coloured lighting makes each photograph into a kind of stage, a little pantomime theatre that inadvertantly mocks apprehension about life’s or the planet’s brevity, where every symbolic ingredient is so impeccably positioned (including vertically arranged spoons) it all seems over-determined. It seems to be clawing for meaning by attempting to embrace too much, incorporating everything and elucidating nothing.

In other words the bizarre colour and contrived arrangements here tip the memento mori ethos over on its side, pulling the carpet out from under the original Dutch puritanism. The result is a sort of Las Vegas vanitas, a morality tale illuminated with electric light or synthetic colour that is knowingly garish, yet which does not reflect on its own lack of ideational definition, its indiscriminate snatching up of too many themes along with any glittering shiny bauble, its enthusiasm for optical and conceptual effect.