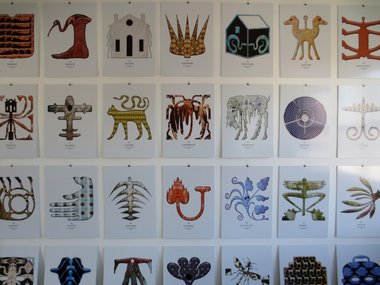 The overall mood is that of ornamental signs that pick at notions of taxonomy, visually dominated by the outlining curlicues and spirals of the salient shape and the intricate self-referencing patterns often contained within it. Killeen’s generic forms here become unabashedly fetishised with the lavishness of their internal compositions, a form of gorgeous heraldry or large, nonwearable badge.

In four white rooms (the lefthand half of Ivan Anthony’s) at the top of the stairs, Richard Killeen is currently displaying 110 items, images that have been taken from his image bank, blended into inventive permutations and placed individually onto white rectangles of corrugated plastic - with written titles added. Locked in grid formations so whole walls are covered, or leaning on the wall in rows while placed on the floor, or pinned up high near the ceiling, it is an unusual hang. One that is quite refreshing in its unpredictability.

So taking the shaped motifs developed in his cutout series, Killeen has now incorporated later variations firstly where fabric like pattern was incorporated, and secondly where an illusory thickness was added, enhanced with highlighting sparkles around the edges. The shaped, very decorative motifs - usually of dogs, cats, birds, fish, insects and body parts - look as if pressed out of moulded plastic or metal, or cut and ground from thin marble. There is no spatial depth as in a room or box; more a teasing out of each picture-plane, limited by the complexities of its frontality as well as negative shape jabbing at its four edges.

This means that are several types of space woven together around the ‘creaturely’ motif: firstly, a shallow projecting ‘slab’ or ‘mineral’ space, the illusory object that is the focus of our attention; secondly, within that sometimes a diagonally aligned (but usually parallel) patterned space; thirdly outside the object, the negative forms pressing against the edges of the ribbed translucent plastic; and fourthly, in front, the relationship of the rectangle to the gallery. Then hovering outside all this, but never too far away, is the title, usually a hybrid term Killeen has made up - floating in linguistic space to inflect any interpretations you come up with.

The overall mood is that of ornamental signs that attempt to blur notions of taxonomy, visually dominated by the outlining curlicues and spirals of the salient shape and the intricate self-referencing patterns often contained within it. Killeen’s generic forms here become unabashedly fetishised with the lavishness of their internal compositions, a form of gorgeous heraldry or large, nonwearable badge. Despite being without a background - apart from the cellular translucent plastic - each one instead presents a rich window to another world within its contours, as if a nondigital form of hyperlink or ‘online writing’ where nonelectronic images telescope into more images, a bracketing through - and not an adding on like syntax structured in a sentence.

As isolated images these cheaply available motifs ($250 a pop) hold your interest because of their emphasis on the picture plane mixed with intricate decorative rhythms, playing off the ‘looking at’ against the ‘looking through’. They manage also to stir the imagination, generating interpretations about each patterned shape and its own narrative history.