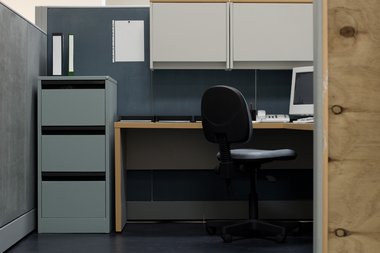 Hayward is known for his virtuoso hand carved replicas of domestic and office utensils, and appliances, items that disrupt our assumptions about the properties of such objects when commonly encountered in the gallery space. With this particular show with its impeccably carved and painted office dividers, desks, lamps, computers, and stationary, we have an added contextual issue of whether you need to be familiar with a certain film to enjoy it.

Glen Hayward
I don’t want you to worry about me. I have met some Beautiful People

A touring show of work Glen Hayward made while a Rita Angus Fellow last year, this exhibition has been to Christchurch and Wellington. I don’t want you to worry about me. I’ve met some beautiful People is now in Starkwhite, his Auckland dealer.

Hayward is known for his virtuoso hand carved replicas of domestic and office utensils, and appliances, items that disrupt our assumptions about the properties of such objects when commonly encountered in the gallery space. With this particular show with its impeccably carved and painted office dividers, desks, lamps, computers, chairs, phone and stationary, its Thomas Demandlike stillness, we have an added contextual issue of whether you need to be familiar with a certain film and certain office scenes to enjoy it.

With some artists, fond of referencing specific books or essays so that their presence dominates a visitor’s experience of their visual endeavour, the issue is whether the display is so wedded to that other contextualising artwork that it has no life of its own. So when The Matrix has as its dominant theme two parallel worlds - one ‘real’, the other a simulacrum of 1990 just prior to when civilisation was destroyed - one ruled by machines, the other by humans identical to the robots, then various readings can apply to Thomas Anderson’s ‘illusory’ office. The sculpture though does look like a film set, with parts deliberately not visible to the camera, and a security camera included on the other side of the room that’s ‘in’ on the joke.

The notion of illusion itself can be extended to go beyond say trickery or a dreamlike level of consciousness or a solely visual focus. With Hayward’s hand-carved replica we would know by touch - exploring felt texture and weight - that we are in the presence of a facsimile. True illusion would fool us in those nonvisual dimensions too.

More interesting may be the discussions of the British Empiricist philosophers like Hume, Locke and Berkeley, about what information can we be confident of as existing outside of our bodily sensations. In other words, what stimuli are distorted or manufactured by our bodies? What qualities which we experience really are that way - before we came along to ‘detect’ them?

There are also the art particular issues raised by the late Arthur Danto, a philosopher who in the early sixties was very excited by Warhol’s replicas of Brillo boxes. These he regarded as a sign that we had reached ‘the end of art’, where there was (he claimed) no visual difference between art and the subject matter it copied. Art no longer was preoccupied with the notion of imitation, for it now had ‘no stylistic or philosophical constraints’. In a postWarholian era, everything and anything was permitted.

Hayward’s installation is even more indistinguishable visually from its referent than Warhol’s sculpture. Its perfect finish is amazing, but it also forces us to examine the issue of its desired conceptual layering, layering put there to make the sculpture a statement not restricted to just terrific manual technique. What if the artist had used store-bought ‘readymades’ instead? How would the work then differ in its meaning? Would this be solely an idea-based work with no hand-skill component?

In such a hypothetical ‘readymade’ scenario, one wonders if The Matrix has sufficient status in popular culture for anybody to care overmuch about this conceptual project. I suspect the film is too complex, too esoteric, and too superseded by other futuristic movies to allow referencing ‘readymades’ (borrowed say from assorted technology museums) to make a powerful statement in a gallery context. The same applies even if they were 3D printed, using the latest digital technology. As this show is, here at Starkwhite, the real focus is Hayward’s craft and obsession for detail. His manual skill and precision is really what Don’t worry about me… is about, not resonances within a perhaps soon to be forgotten sci/fi film.