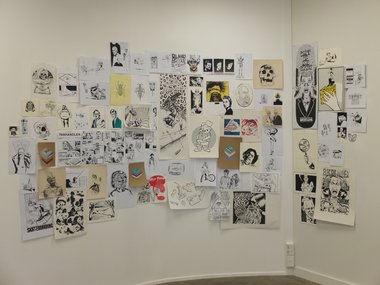 Both artists are accomplished practitioners, working in black and white and sometimes colour. What we have in the gallery is a representative sample of some of their work from over the years, demonstrating their facility with line, form and shadow, using a range of methods and processes, some of which involve sketching, digital manipulation and printing methods.

At a rough guess I’d say that young boys and girls of my vintage got their first introduction and taste of art/Art via comic books. They were the video and Play-station of my generation. My grandmother, post-World War Two émigré from England, bought me each week the classic Tiger comic book. I remember I was as much enamoured at a young age by the graphics as I was of the narrative. Although an untutored very naive eight year old, unlearned in the deep mysteries of aesthetics, I do recall being disappointed when they changed the illustrator. Olac the Gladiator series was never the same. The definition of form to the rippling muscular body was not as convincing or satisfying somehow.

Over the years I’ve nostalgically searched for those early antique copies, chasing my lost innocence, even as far as some well known London comic book shops, all to no avail. As close as I’ve come to finding the look, colour and feel of those 1950s works is Classics Illustrated - Homer’s Iliad, Red Badge of Courage and the like.

More recently there has been a resurgence of interest and acknowledgment of the aesthetic value of comic book art and illustration. The graphic novel came of age with both script and visuals pushing the boundaries and knocking on the door of Art and Literature. Case in point is American street artist, Eric Drooker’s collaboration with poet Allen Ginsberg on the latter’s famous work, Howl, borrowing from Surrealism, Edward Hopper, Fritz Laing’s Metropolis, Kokoschka and Easter Island sculpture among others for visual pyrotechnics. “I saw the best minds of my generation destroyed by madness” never looked so good.

New Zealand’s contribution to the genre has not been slight and the recent publication of its history, From Earth’s End: The Best of New Zealand Comics, by Adrian Kinnaird, at 431 pages, is testament to that. Dylan Horrocks features, along with many others. Given among other things, his famous Hicksville, a construction of a kind of history and critique of the industry itself, he is a worthy a preeminent inclusion.

One of my favourite frames in the aforementioned novel involves Horrock’s alter ego characters, Moxie and Toxie, consciously drawn in stick figure style. A sample. (Indulge me). Gazing up at the night sky from some New Zealand riverbed location, Toxie waxes lyrical about the glorious view, the splendour of the universe, the wonder and beauty of the greatness of it all. “Doesn’t it fill you with awe?” he asks Moxie in ebullient voice. “Actually it just makes me feel small, insignificant and pathetic,” she replies, cutting him off at the knees. He frowns, mumbles, sighs. She warms her hands by the fire she’s just built and says, slyly, “My job here is done.”

Our own Hamilton based comic book artist/illustrator, Dean Ballinger, like Horrocks, works predominantly in black and white and demonstrates that the comic book medium is not afraid to tackle the arty and erudite stuff. Another sample. Jackson Pollock comix: six frames full of random squiggles with a black vivid marker. There’s a Dada avant-garde superhero, an existential angst ‘narrative’ with six frames each completely blanked out, Karl Marx interrupting a wedding - “Stop in the name of dialectical materialism” etc and best of all, the Post-Structuralist Comix featuring Derrida the Deconstructor - “We must smash the bourgeois hegemony of the panel! Liberate the balloon from the word..!” Cue to a series of speech bubbles floating about in the air without text.

The history of the comic has moved in illustrious circles, beginning with Trajan’s Column in Rome right down to the twentieth century where the link between the humble art of the illustrator and rarefied world of Art was manifest in our own existential hero, Colin McCahon, the first modernist to use the speech bubble, a decade before Richard Hamilton would utilize it and even longer before Warhol and Lichtenstein would appropriate it for Pop Art.

Which brings me on a long circuitous route to this current exhibition in Hamilton, at Draw Inc, 113 a Alexandra Street, where the work of two graphic artists is on display: Alex Kinnaird and Andres Jensen, one former - the other current - Wintec students.

Both artists are accomplished practitioners, working in black and white and sometimes colour. What we have in the gallery is a representative sample of some of their work from over the years, demonstrating their facility with line, form and shadow, using a range of methods and processes, some of which involve sketching, digital manipulation and printing methods. Both use fine brush work to achieve their graphic effects which are seen in the poster work as well as the comic book configurations and singular figure portraits. In some of the work, there is a move beyond the mere display of illustrative skills and formal qualities of image construction. For example in Alex’s Action/Reaction we see a collaged piece that incorporates text taken straight off the Web involving transcripts of interrogation by police of various suspects woven into a collage of images that explores the theme of justice. This is visited again in a work that consciously and adroitly mimics Lichtenstein but moves beyond simple delight in Pop Art aesthetics with the addition of social commentary.

Andres, sometime skateboard designer, shows his proficiency with India ink on paper in particular. His figure portraits, Cavemen, Farmer, Django and others as well as his screenprints, are classics of their kind. An assured line and facility with black and white forms sees him challenge the best in the medium.

This is a show that in its profusion of images and in the quality of their execution will reward anyone interested in the graphic arts.