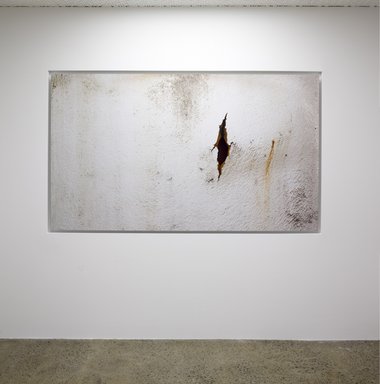 One of the first hits in the early sixties by The Rolling Stones was the Slim Harpo song that went “I'm a King Bee, baby, buzzing around your hive.” This perky little insect appears to be heading straight towards the other photograph, an image that suggests a lot more than just needed gallery maintenance. The photographed fissure clearly references the female organ, via its similarities to Courbet's The Origin of the World (1866) and Duchamp's Etant donnés (1946-66).

This is the second g. bridle Auckland presentation in recent months, and it is quite different in mood from his St. Paul St Gallery display. Even more minimal, it’s super-duper elegant in its restraint, and easier to read in terms of narrative and objects loaded with associations.

Within the two back galleries of Artspace, tucked away behind the main Artspace ‘square’, bridle has removed the small partitions that created two long narrow rooms separated by a corridor. Now it is a single skinny L-shaped room where you can look at the two end walls simultaneously by standing at the right-angled corner between them. Those end walls are used to present two rectangular photographic prints, float-mounted and set flush within the wall surface - not in front.

On the left is an image of a battered and weathered piece of hardboard that was once painted to be part perhaps of a gallery wall. Because it is not MDF, when violently hammered it tends to not absorb the force but instead flake, crack and fragment. We see a diagonal crack, a sort of gash, the result of a powerful blow, maybe from a chisel.

The righthand image is quite different. We seem to be gazing out of a window to admire the clear blue sky. Near the bottom lefthand corner is a hovering buzzing bee. It is about to enter the gallery.

One of the first hits in the early sixties by The Rolling Stones was the Slim Harpo song that went “I’m a King Bee, baby, buzzing around your hive.” This perky little insect appears to be heading straight towards the other photograph, an image that suggests a lot more than just needed gallery maintenance. The photographed fissure clearly references the female organ, via its similarities to Courbet’s The Origin of the World (1866) and (more indirectly) Duchamp’s Etant donnés (1946-66).

By the entrance to g. bridle’s exhibition, on the cross-section of wall (doorway) that you pass when entering, is a vertically aligned sculpture consisting of a woman’s cigarette holder into which is jammed the glass stopper of a perfume bottle. These accoutrements of alluring femininity encourage the visiting ‘bachelor’ to quicken his pace as he turns the corner, to maintain his enthusiasm.

There are lots of levels going on here. For example, there is a sense that the very act of producing this installation by cutting into the end walls with a blade is an obscene action, making a ‘cut’ in the MDF being the equivalent of making a ‘cunt’ in the oft-discussed Shakespearean sense of Twelfth Night (Act 2, Scene 5) - by dwelling on his oblique three lettered pun. This obscure point is worth mentioning because the image-in-aperture presentation within the L-shaped floorplan is strikingly unusual in itself, as well as with the different lengths of room and the different sized rectangles. The production process is just as loaded as the end result.

Alternatively the different elements of this show can be read separately, as discrete units. The bee might be a Buzzy Bee - that much loved item of Kiwiana and distinctive symbol of childhood - here entering the pristine gallery where ‘adult’ thought dominates; while the cracked wall panel could stand for a sign that beckons to the DIY ‘fix it’ tradition, a stereotype of masculinity, the weekend handyman ethos.

In the centre the ‘feminine’ cigarette holder and perfume stopper play with aroma: one released scent counteracting the smoky residue of the other. It seems to be an infinitely regressing pun on the French fumer, to smoke, and par, through. Smoking stopped by perfume, through smoking.