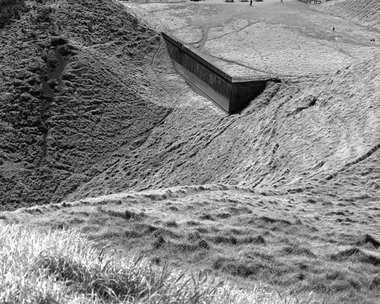 Looking at connections between the three images: on a collective level the interpretation changes. The pale surveying pyramid pointing upwards suggests a spiritual optimism, while the dark lava rock looks sinister and ominous, as if it has come up from below.

Becky Nunes‘ set of three images lined up on the Reeves Road ‘Warehouse’ wall is based on photographs taken at the nearby Mt. Wellington crater. Coloured in gorgeous greys, accompanied by vivid detail and dramatic composition, they show a trig station on the adjacent high ridge, the crater itself with its city water reservoir embedded in its side, and an angular chunk of pitted scoria hovering in space. The three make up a fine set, two triangles flanking a concavity.

The trig station, aimed heavenwards like a steeple, has much graffiti scratched into its lower panels, while the four flaglike metal panels at its peak have been surprisingly roughly painted, as if with a housepainting brush. Its uniform grey background has a vague suggestion of warm chroma, a hint of nuanced colour.

With its oblong concrete side, the reservoir overlooking the bowl-like crater looks as if it could be a brutalist dwelling or bunker - maybe with a glass frontage. Its grass-covered terrace/roof hides a buried boxlike geometry, while the crater with its finely textured long grass seems to be some sort of collapsed hairy mat traversed by a network of crisscrossing tracks. The density of the covering, the lack of dark tones, and the straight edge vertically above the mysterious tank, provide drama. The steep slope, moving up towards the viewer at the bottom, suggests the image was taken from up high, perhaps near the trig station.

The third grey image, like the others, is finely detailed. The rock has an opaque background, not a receding or infinite field, and its hardened chipped form - with dense clusters of small bubbles and pits, and larger craters - is covered by more recent additions like lichen and spider webs. It has dramatic shadow all down its righthand side, suggesting it might also be an approaching asteroid.

Looking at connections between the three images: on a collective level the interpretation changes. The pale surveying pyramid pointing upwards suggests a spiritual optimism, while the dark lava rock looks sinister and ominous, as if it has come up from below. The middle image shows an adult and two children wandering around with a couple of dogs up near the top edge - exploring a neutral middle ground - and so this becomes a foil to the light and dark symbols on either side; a vaguely alluded-to ethical quandary, the two available human options.

However here’s another thought, that perhaps there is a Maori reading of the elements that flips them so that the righthand image is positive and the left negative. The trig station, linked to surveying, colonial exploration, and on certain occasions, land confiscation or contestation, might be seen as sinister while the rock (as being from a sacred space) is perceived as holy or at least positive.