The Allure of the Aesthetic 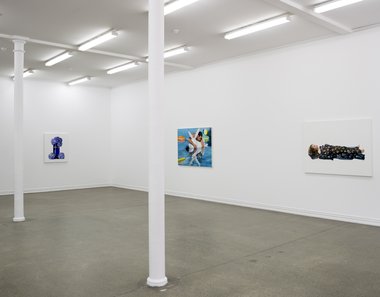 Ironically, critique is not only provoked by consumerism but can also be seen to motivate it in helping to sustain the art-market’s self-reassuring stance that it is working for a greater ideal. By provoking critical readings of his works through explicit titles and subject matter, Zavros seems to mock our need to find a greater meaning to justify art consumption by hiding any traces of superficiality with the appearance of a social-conscience.

In its self-conscious exemplification of beauty, Michael Zavros’s Bad Dad series is an exploration into the alluring appeal of a polished aesthetic and how this is enacted in the realm of consumerism and the art gallery itself. The hyper-real painting style that Zavros employs has an effect that is two fold: the value (both moral and commercial) of the painting act is reasserted through each meticulous paint stroke, and these individual gestures merge together to create an image that advertises not only the materialistic culture that it represents, but also the painting’s presence within the gallery space as an art object for sale.

Zavros’s paintings are a blatant celebration of the aesthetic appeal of consumable beauty in their subject matter and technique. For Zavros, fashion “articulates a utopia, a perfect world” that utilises advertising to seduce the public through presenting an ideal life and mode of being. In fashion, the aesthetic object is an extension of the aesthetic life, working to reflect and reinforce the visual appearance and status of the possessor. Zavros’s paintings engage in a dynamic relationship with these concepts. In their realism they assume the role of an advertising spread in a fashion magazine, selling their subject (and with it, themselves) through sheer beauty of composition, realistic texture, and luminous colour and light. Bad Dad brings to mind the bright, fun colours of Mario Testino’s swimming pool themed fashion spreads and it is through this reference that Zavros markets his artistic talents: the bulging plastic forms of the inflatable rings are so realistically reflected in the water that I had to keep reminding myself that I was looking at a painted canvas, and not a photograph. Like fashion objects, these works present a certain perfection that demands to be consumed. The luxurious sheen of a silk tie is impeccably evoked in Charmer/Pucci and the artist’s skill, like the tie’s branded label, is laid bare for the viewer’s scrutiny, appreciation, and admiration.

It is through the seemingly simultaneous heralding and masking of the presence of the artist’s hand that Zavros’s works both invite and elude artistic comparison. In their shameless allusions to aestheticism and vanity in works such as Charmer/Pucci, it would be tempting to suggest comparisons with Damien Hirst, Jeff Koons and possibly even Warhol. It is within this artistic framework that Robert Leonard, the writer of the exhibition catalogue essay “Michael Zavros: Charm Offensive”, places Zavros. For him, Zavros’s works follow a similar artistic vein to Koons and Hirst in that in shamelessly celebrating the aesthetic they can be seen to bridge the divide between high-minded art and the simplicity of pure entertainment.

Yet while Zavros’s plastic forms possibly bring to mind the sculptural objects of Jeff Koons and the shameless revelling in materialistic pleasure is certainly akin to the spirit of Pop Art, there is a marked difference in approach. Whereas Koons employs a team of fabricators to assist with his high production works, Zavros instead painstakingly paints each work himself. Each beautifully realistic flower petal in The Greek is the product of his virtuosic ability and the covering of his daughter Phoebe’s body with a diaphanous fabric in Phoebe is Dead/McQueen displays his indepth understanding and ability to powerfully evoke tangible human flesh through painted gesture and technique. The video of Zavros working in his studio serves as a constant reminder of the presence of the artist’s hand and impressive talents: as unbelievable as it may be, these images were created by the physical movement of a hand across a canvas. The powerful potential of human creativity is thus asserted and celebrated within the gallery space.

This can particularly be seen in the drawings on the upper level of the gallery. These drawings and etchings are copied from Richard Prince’s photographs of cowboys, which in themselves are appropriations of Sam Abnell’s photographs for cigarette advertisements. The images are thus embroiled in a complex interlocking network of re-appropriation and self-reference. Theoretically such visual appropriation is comparable to Sherrie Levine’s re-photographing of Walker Evans’s photographs in 1980, yet there is a fundamental difference in that while Levine utilised the same media to appropriate, Zavros replaces the mechanical apparatus of the camera with the personal hand of the artist. There is thus an additional dimension to the theoretical conception, in which the relationship between drawing and photography is implicated.

As stated in Zavros’s interview with Rhana Devenport, Gerard Richter’s notion of diminishing an original photograph through the act of painting it is of key influence to Zavros’s working methodology and conception. The traditionally perceived binary between photography and the act of drawing is, through Zavros, explored and challenged through the works’ sheer attention to detail and realism (this can particularly be seen in the folds of the cowboy’s jacket). The drawings are thus not simply a mechanical reproduction of an original, but rather the result of an exercise of copying in which the artist’s abilities have been tested and experimented with. In re-appropriating an appropriation with artistic manipulation, Zavros seems to play with concepts of artistic ingenuity and originality, proclaiming these qualities for himself in the process. Walter Benjamin’s postulations of the loss of authenticity in reproductions are thus turned on their head and challenged.

These drawings and etchings are indicative of the layers of self-reflexivity and societal referents that, in my opinion, permeate Zavros’s works. It is through this suggestion of criticality that I find a point of departure from Robert Leonard’s arguments in the catalogue text. For Leonard, Zavros’s works are self-reflexively beautiful yet do not deconstruct or critique their subjects; they eschew criticality and in doing so, unconsciously critique criticality. While I do agree with Leonard’s opinion that criticality tends to be the go-to for art reviewers who privilege social theorising instead of concentrating on formalist aesthetic qualities, I feel that his argument is but one reading of Zavros’s works. In my opinion, the subject matter and technique of his paintings works present an intelligent criticality that is two fold: a critique of the consumption governing a status-oriented society, and a critique of the art-market appeal that this visual criticism will necessarily ignite.

Self-obsession and materialism in a consumer-driven world are prevalent themes throughout the works. In Bad Dad, narcissistic vanity is linked to bad parenting and Phoebe is Dead/McQueen can be seen to be a haunting memento mori of the temporality of beauty in fashion trends (in which artistic trends can be implicated). In Charmer/Pucci a beautiful tie rears up towards us, exposing its branded label and creating an interesting power relationship in its allusions to snake charming: we are charmed by the allure of high fashion and want to consume it, yet are we in control of this desire or is it in control of us?

Alain de Botton’s theory of status anxiety is, as Leonard suggests, most definitely relevant in viewing Zavros’s works. Beautiful objects speak of aspiration and as such are appropriated to convey and bolster prestige and sense of self-worth. It is a cult of consumption to which everyone aspires and it is at this point that Zavros seems to both reference and parody Walter Benjamin’s postulations of the cult-like authority of the ritual and religion of in pre-industrial art. The subjects and technique of Zavros’s paintings are symptomatic of an industrial, materialist culture and as such, according to Benjamin, should be devoid of authenticity and originality. Yet the very presence of Zavros’s personal painterly hand re-invests both the subject and the painterly object with this ‘aura’, thus elevating symbols of post-industrial capitalism to objects of ritual and authority.

In referencing advertising through his artistic style, Zavros is calling attention to the role of paintings within this theory and to the commercial role expected and presumed of an art object within the gallery context. The works are imbued with layers of self-reflexivity and influence: they are beautiful paintings that we want to possess and display in our homes yet their beauty is sourced in objects that are also beautiful and ripe for possession. The act of consumption (visual and monetary) in entering the gallery space is revealed by the very nature in which we are seduced by Zavros’s artistic style. In his interview with Devenport, Zavros explicitly refers to the commercially centred view and practice of the contemporary art market, stating that “art’s value has shifted.  These days, people discuss art’s commodity value rather than its merit value”. As such, the direct flaunting of his paintings as displaying and embodying beauty can be seen to pander to this commerciality, exploiting and critiquing it in the process.

Yet this critique is laid bare for the audience through the connotative titles of the work, which suggests another layer of critique within the work. Titles like Bad Dad, Phoebe Dead/McQueen make it all too easy to assume a generic ‘consumerism is bad’ critique from the paintings. The paintings, in their explicit referencing of vanity in a self-consciously beautiful style, perhaps can be seen to subtly mock the contradictory expectation and role of art in today’s art market: art objects are bought and consumed for their connotations of social prestige and capital, yet are also expected to hide any potential superficiality of consumer motivation by being invested with a layer of social interpretation or critique.

In this analysis, critique thus motivates and is provoked by consumerism, helping to sustain the art-market’s self-reassuring stance that it is working for a greater ideal. This is alluded to in Zavros’s interview with Devenport, in which he states, “Art holds fast to the idea that it is relevant, important and enduring. I find this lofty self-importance tedious, and yet I am complicit with it.” For him, fashion appeals because it doesn’t take itself too seriously, “Fashion isn’t going to save the world, but neither is art.” By provoking critical readings of his works through his explicit titles and subject matter (the skulls in the Phoebe is Dead/McQueen almost provide a visual ‘interpretation by numbers’, or ‘fill in the blanks’ exercise), he seems to mock our need to find a greater meaning to justify art consumption by hiding any traces of superficiality with the appearance of a social-conscience.

Be they critical or not, consumerist or anti-consumerist, Zavros’s paintings bring the sheer potential of the artist’s hand into the spotlight. The video of Zavros working in his studio is a constant reminder of what cannot be denied: as a painter, he has extraordinary skill and talent in rendering tangible form, texture and tone. They are most certainly beautiful paintings of beautiful people and objects that can be appreciated and celebrated as such. While a critical interpretation is by no means necessary or obligatory, to deny the possibility of such a reading would be a disservice to not only Zavros’s interview with Rhana Devenport but also the layers of meaning that can be garnered from the works.