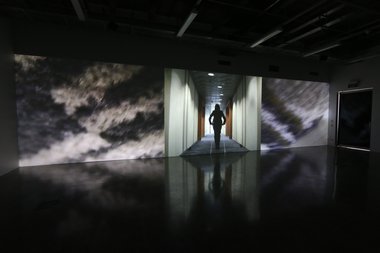 With Gorodi's project the main fascination lay in the links between simultaneous images: the information that was presented in parallel where rapidly changing details could be scrutinised and pleasurably pondered over. Various angles, profiles and interacting planes to be accounted for; spatial, speed and movement patterns accentuated.

Suzie Gorodi‘s PhD examination show in St Paul Street’s Gallery Two presented three suites of three (or four) simultaneous projections on the long main wall. Each featured the artist’s moving body that was both filmed and filming - the latter not overtly but through towed dollies, strapped on cameras and extended arms that via poles held recording cameras and mics. Gorodi’s own figure was the observed solo subject and her extended limbs sources of tactile sensation, like the human eye (or camera lens) itself.

This exhibition had a lot in common with Alex Monteith‘s memorable Need For Speed exhibition in St Paul Street Gallery in Galleries One and Two in 2008. The same long wall of Gallery Two was used in both shows (both with split screens) while both exhibitions featured extremely vivid sound and fast motion.

In her three videos Gorodi exploited multiple cameras to show herself manipulating movement and sound as a means of interacting with space and time. No other person was involved in the physical act of filming, so the notion of independence and self-reliance is crucial.

The most recent work, the Corridor Series, made in an AUT lecture block this year, showed the artist wearing a harness that pulled a dolly holding a camera aimed at the back of her moving figure. Her arms manipulated cameras and mics on the end of two poles (periscopes) that rubbed against the walls she walked between, as well as the ceiling above. Like say a rat’s whiskers that assist the rodent’s movement in the dark, they provided her with a palpable ‘filmic’ location within the narrow corridor, going beyond the visual or the tactile to a new sort of spatial materiality - even though they were ‘antennae’ that felt planar textures as well as seeing tangentially.

The two earlier works from last year were very different in the way the cameras were aligned. Dominion Road Series, used four cameras, and like the later Corridor Series had the torso moving in a linear fashion down the middle of the motorway but using semi-rigid braces to push the dolly. One camera on Gorodi’s head was aimed upwards (skywards), another on her face was aimed at the dolly being propelled ahead, a third on that dolly was directed back at the artist, and the fourth was attached to the side of Gorodi’s torso, aimed to the front at a skewed sideways angle.

Another seemed cognisant of the theory of physic’s Observer Effect, where the action of measuring or recording interferes with the accuracy of collected data, where the state of being observed (as at least one camera in each work seemed to do) effects behaviour patterns and statistics.

With Gorodi’s project the main fascination lay in the links between simultaneous images: the information that was presented in parallel where rapidly changing details could be scrutinised and pleasurably pondered over; various angles, profiles and interacting planes accounted for; spatial, speed and movement patterns accentuated. Add to this the subject placing itself under surveillance, not only as a means of image generation (for its own sake) but also exploring muscular self-understanding in terms of gait, posture and body language.

With the Plaza Series, things were a little different, for filming became an act of ‘histrionic’ performance, speedy frenetic actions and shaking dollies even mimicking ‘expressive’ painting, bending wavy lines jostling in parallel within blurred fields. Here sometimes streaky ‘gestural’ agitation became the content, with artists as diverse as Roman Signer or Dan Graham possibly alluded to in Gorodi’s use of dervishlike movement. As with the other series, the work was never about the subject’s experience of space but about image generation - a celebration of (multiple and co-ordinated) vistas with movement, projected and juxtaposed on a wall.