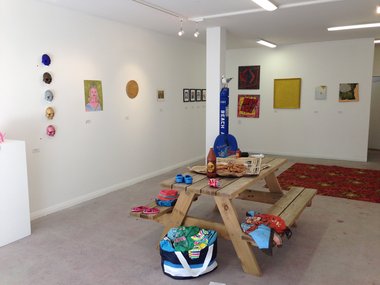 A Matter of Taste
Curated by Kate Powell and Draw Inc.

Art has always co-opted. The Renaissance reworked all things classical while Picasso reabsorbed the primitives. Today appropriation is still the handy go-to starting point where new twists on old material are endlessly played out, creating in the process ironic distance and impish dissonance. Nothing escapes the voracious appetite of art in its quest these days to not so much “make it new”, but rather to “make it over”. ‘Renovation’ is the new ploy which is the old ploy revamped with elements of paradox, humour, double declutching and sometime caustic malice thrown in for good measure.

Kitsch, that staple of bad taste, is a classic example, employed by the art fraternity for several decades, Jeff Koons the supreme exemplar. Our own Queen of Kitsch, Judy Darragh, has added to the oeuvre and now curator, Kate Powell, in conjunction with Draw Inc, has drawn together in A Matter of Taste a complete exhibition of the material providing a snapshot of New Zealand practice currently at work in the area of art/kitsch, that fractious zone where ‘bad’ taste meet ‘good’ taste in an ‘unholy’ alliance to create an ambiguous friction that has viewers looking both ways at the same time.

No such show would be complete without fake cake, first trialled by Pop artist, Claes Oldenburg. Rachel Kiddie does a New Zealand version starting with lamingtons, of course and cutely called, Chocolate lamington square-dance, as cute as her John Lemon meringue pie also carefully constructed out of card, newspaper, wallpaper glue, cheese cloth, plaster, acrylic paint and varnish. These are trompe l’oeil enough to make you want to pick one up and take a bite.

After working up a thwarted appetite, Mark Curtis invites those with discerning taste to sample his Pineapple Lumps. The lino cut depicts a close-up rendition of male genitalia while an enlarged fruity version of the same on canvas (Fanta Pants) employs glitter, the standard stuff of the tacky, to delineate the pubes in glorious art nouveau swirls. It recalls Michelangelo’s deft chisel work on the heroic David’s nether region, looking for all money as if he’d just come out of the salon. All that glitters might not be gold but exceptions must be made. Gold as the supreme metal is that long-standing symbol for the age of bliss. It is here used by the artist to carry utopian erotic meaning particularly redolent in his portraits of William in Paradise and Lost in the Garden, with all their Edenic overtones.

Following Damien Hirst who followed ancient Peruvian models, Curtis also serves up a series of ubiquitous glitter encrusted skulls that take up the same macabre trope: death made to look pretty. These cut-price painted masks (Glitter Skulls) with memento mori theme, grin with a kind of sick religious appetite. Daley Maasz adds to the thread of things with his monochromatic glittering Gleebus using the same Lurex shimmer and sparkle to present his embossed face of Christ.

Plasticine, another humble craft material found in every well stocked Playcentre, is the unassuming stuff used by Joseph Scott to form pink headless chicken concoctions, entitled, Animals, which lie somewhere between a child’s clumsy play and some mutant sci-fi creature out of the stable of Dali.

Beauty pageants with their glint and twinkle come to us as readymade kitsch objects, so Priscilla McIntosh didn’t have much to do, other than add gold stick-on dots as a background to her smiling crowned beauty queen. She then moved across into the territory of a movie actress from the forties and fifties to create a fauve makeover of several Hollywood starlets. Her Red, Blue, and Green Ladies present as glorious glamour stereotypes from the period. Even more glammed up in gaudy colour - resembling something like a camp Warholian Marilyn - Shoshana Sachi does something similar with her digital print, Little Miss Broadway.

Religious imagery is another goldmine, a cache of kitsch to work with and Mira Struck does a slightly understated treatment of the Christ figure in her Kooky Jesus, complete with doe eyes and coy head tilt. The bleeding heart becomes a solid abstract slab of red beneath the portrait.

Salvador Dali during his religious phase skirted the edge of kitsch with his nineteen fifties crucifixion scenes, attempting to infuse a space-age feel into his otherworldly paintings. Joan Miro, his compatriot, went abstract under a similar influence and created ciphers: black dots joined by black line. These resembled angelic script and later became the inspiration for modern furniture design. Stuart Shepherd takes this trope and makes a Space Drama out of it, piling on the paint in good New Zealand nineteen eighties expressionist style. The mix of qualities, impasto with linear elements where extravagance meets reductionism, is both ‘clumsy’ and kitschy but also vaguely satisfying.

The slightly surreal move that Scott indulged in with Animals is taken up by Shepherd in a digital print entitled Egg Face that pictures multiple empty broken egg shells, one of which is inhabited by a doll-like creature smeared in egg yolk. This spooky scene conjures up something between Hitchcock and a trashy B grade vampire movie.

My favourite in the show however would have to be the work that skirts closest to pure kitsch, but pulls off the transformation with consummate skill and bravado. It’s a high risk venture, but all the more satisfying in its accomplished reworking. The relief sculptural creations of Rosalind Horner are simply called Composition I and II.

They consist of a slab of wood turned into a landscape format by chiselling into the wood itself and taking the chips and gluing them back onto the board to create sky or rain or land. Add a piece of roughly cut grey lino to make a cloud, a touch of paint, and the work is complete. The resultant forms recall all those cheesy dioramas that once used ice-block sticks, shells and bits of foliage to concoct their geography. However here the reductive treatment creates a stunning semi abstract scene that straddles with daring and aplomb the worlds of art and kitsch - without compromise. It’s a Houdini act of audacity and brinkmanship.

A similar kind of creation by Ada Leung uses vegetable gelatin capsules, glue and resin to fashion a flower, Anemone rosette and an island, Turtleback atoll. Both possess an element of cuteness undercut by the inexplicable and bizarre.

The piece de resistance though would have to go to Kevin McCardell, and his Day at the Mount. A series of items ishand-carved in pine, ash and kauri and painted: a towel, coke tin, a bag of clothes, a pair of jandals and crocs, L&P and ginger beer bottles, camera case, sun screen tube, It is topped off with an open newspaper cradling a generous spread of fish and chips all collected on and around a trestle picnic table. Super-realism with just enough roughness to fall this side of something Glen Hayward or Fiona Connor might have created, it effectively sets up a context where irony, satire and sincerity play off against each another.

This is a disarming, clever and amusing exhibition, full of jest and quirky joke that demonstrates how adroitly artists can play the crossover game while navigating their way nimbly through equivocal territory. It’s also where the imaginative products of their labour, marinated in camp, are deliciously served up in cunning quotation marks.