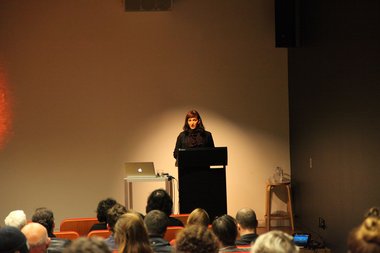 As a curator who has lived and worked in Cambodia for the past twelve years, Gleeson brought personal insight into the challenges, ethical considerations and self-reflexivity that are inevitably involved when working in a new culture as an ‘outsider'. Delivered as the introductory keynote speech of the St Paul St Gallery 2014 curatorial symposium (centred on models of cultural exchange), her discussion provided a considered and, at times, brutally honest personal assessment of the expectations and realities of cultural engagement and reciprocity within the sphere of the arts.

The Problem with Sunset

Erin Gleeson delivered a refreshingly critical talk concerning the feasibility of valuable cultural reciprocity in our current social climate. As a curator who has lived and worked in Cambodia for the past twelve years, Gleeson brought personal insight into the challenges, ethical considerations and self-reflexivity that are inevitably involved when working in a new culture as an ‘outsider’. Delivered as the introductory keynote speech of the St Paul St Gallery 2014 curatorial symposium (centred on models of cultural exchange), her discussion provided a considered and, at times, brutally honest personal assessment of the expectations and realities of cultural engagement and reciprocity within the sphere of the arts.

Gleeson’s discussion highlighted the limitations underscoring tangible, enriching cultural engagement. Our interactions with other cultures have historically been the result of enforced interventions grounded in exploitation and falsity of intent, shaping the way in which cultural narratives are constructed and perceived by the ‘majority’. As a result, cultural interactions of the present day are naturally grounded in power imbalances and exploitative action that do not seek real cultural understanding, but rather superficial encounters that are enabled through the advent of tourism. To illustrate this concept, Gleeson pointed to the framing of Angkor Wat as a perceived icon of Cambodian culture that initially served to glorify French imperial rule. This manipulation of cultural image and heritage extends to the present day through the ‘empire of tourism’, in which tourists flock to the site not to gain an insightful understanding of a culture, but rather to get the best photograph (Gleeson included a humorous example of a pamphlet advising tourists on the optimum times to take photographs at Angkor Wat) and in doing so, bolstering the financial coffers of the petrol company that gets the profits from the tickets.

Against such a social and historical framework, cultural exchange cannot, according to Gleeson, be a relationship of reciprocity (which she defines as being an exchange for a mutual good). While curators do strive to address other cultures in their projects, this interest is derived from a (post-colonial - although this term rightfully prompts scepticism and hesitation) social context in which an interest in another culture is rooted in over-compensatory action to nullify guilt for past injustices.  The Seasons of Cambodia art festival in New York was, for Gleeson, an example of the contrived attempts at cultural exchange occurring within the sphere of the arts. Gleeson castigates ‘cultural’ festivals like this for their limited ability to foster understanding and success for the visiting artists while at the same time profiting (both in monetary and in reputation terms) from such a display of ‘cultural awareness’.

Gleeson seems to suggest that the structure of public institutions (arts or otherwise) and the agendas that members of the public assume within this contrived environment render real cultural interaction impossible. In response, she turns away from these organisational structures and the public and instead proclaims her allegiance and support to the artists with whom she is working. Gleeson is involved in the SA SA BASSAC project in Cambodia, which aims to provide a non-profit, artist-oriented projects space that enables emerging artists to experiment and work in a creatively enriching environment. Separated from large, politicised art institutions, the focus of this project is on community and the knowledge that can be shared within these collaborative networks.

Gleeson’s self-critical approach to the practice of curating and the institutions in which she has worked was refreshingly honest in its criticism of the limitations imposed on curators and the arts by an institutional framework. Her preference to potentially sacrifice her reputation in order to stand up for her beliefs was particularly inspiring for me on a personal level. I do, however, believe that when this criticism becomes overly sceptical it is no longer useful, but rather restrictive and unproductive. Gleeson’s dismissal of the public and their role in the gallery space seemed, to me, to be too contemptuous and narrow-minded. She speaks of how her focus is only directed at artists and how she doesn’t think of the public, yet how are these emerging artists going to become successful or feel supported without the interest or engagement of the public? Her criticism seemed to reduce the public to a simple, stock-standard character ‘type’: passive agents of cultural conditioning who mindlessly accept every visual or verbal message they encounter. She distinguished between ‘public’ and ‘community’ yet did not elaborate on the qualifying terms with which these distinctions were made. In Gleeson’s framework, the public is not a ‘community’ of people with individual interests and critical ability, but is rather implied to be an anonymous mass that is moulded by political institutions, bringing these attitudes into the gallery.

While I do think it is important to be critical of ways in which galleries can sometimes pander to and exploit the public to the detriment of curatorial ingenuity, one of the fundamental tenets of curatorial practice is, in my opinion, the ability and the power to communicate art and visual messages to the public. This power does not need to be politicised, but can rather be utilised to enrich and engage the public with new modes and approaches to visual communication. Projects like SA SA BASSAC are community projects and the presence of the ‘public’ is vital to empower these endeavours and to make them thriving, inspiring places in which artistic discourse and practices are shared.

Although unfortunately possibly realistic, Gleeson’s negative hypothesis for the state of cultural reciprocity also seemed unproductive and fatalistic, to the extent that it almost seemed to undermine her own projects. Her F-I-E-L-D-S project (2013) was an exciting and interesting attempt at cultural reciprocity, in which artists from around the world spent three weeks in Cambodia encountering different facets of its rich culture and attending multi-disciplinary workshops and discussions. The artists were not allowed to practise their art whilst there and the emphasis was thus on fostering a real cultural interaction and understanding rather than on individual endeavour. Yet Gleeson’s previous comments about the limitations of this exchange served to prompt me to approach her own project with a critical eye and scepticism. As much as I was fascinated and excited by her project (if I was an artist I would register myself for it without hesitation), I automatically found myself questioning the validity of the project and adopting the same sceptical approach that Gleeson herself utilised when discussing tourism in Cambodia. Her framework thus almost becomes a self-fulfilling prophecy: if real cultural reciprocity is deemed impossible by the organisers of such a project, how then can it be expected to happen?

Gleeson’s talk was both a self-reflexive exercise for herself, and also for me. In its open criticality and questioning of the structures and forces driving cultural and artistic engagement, it highlighted the layers of perspectives and issues inherent in the realm of curatorial practice. Curating is a privileged mode of communication and as such necessarily involves concepts of authorship, subjectivity, cultural conditioning and power relationships. In highlighting these ideas, Gleeson’s discussion placed emphasis on the individual curator and their responsibility to be aware of their practice and how it can be received and perceived in the public arena.