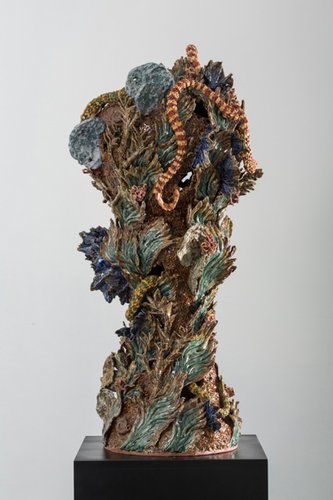 Beckhouse's ceramics seem to come alive before the eyes of the viewer. They are gestural, twisting forms that seem to rise up and out of the plinths and wall space that they inhabit, inviting a relentlessly active viewer gaze and imaginative process. Although these beautiful objects are very much the product of a very skilled artist, they evoke the mystery of objects that have been lost in the abyss of the ocean for an indefinable amount of time, becoming overgrown with shells and anemone and acquiring a life of their own.

The latest issue of Frieze magazine glibly deems ‘good ceramics’, ‘bad ceramics’ ‘old ceramics’ and ‘new ceramics’ HOT, reflecting a general movement within the international arts sphere towards the handcrafted realm of the decorative. Janet Beckhouse’s ceramics at Ivan Anthony in Auckland are, in my opinion, demonstrably beautiful, exceptionally ‘good ceramics’. In fusing together ‘old’ styles with personal expression and her interest in the organic, untamed wilderness of nature, Beckhouse’s ceramics have a powerfully dynamic and captivating presence within the gallery space.

Beckhouse’s ceramics seem to come alive before the eyes of the viewer. They are gestural, twisting forms that seem to rise up and out of the plinths and wall space that they inhabit, inviting a relentlessly active viewer gaze and imaginative process. Although these beautiful objects are very much the product of a very skilled artist, they evoke the mystery of objects that have been lost in the abyss of the ocean for an indefinable amount of time, becoming overgrown with shells and anemone and acquiring a life of their own. As such, they demonstrate Beckhouse’s interest in “growing forms” and her intuitive working method, in which she starts with a simple vessel form and builds upon it subjectively and expressively.

What were originally functional vessels seem to have been transformed into beautifully obscure objects that speak of another epoch and world, prompting the viewer’s imagination to construct a narrative for their circumstances of creation. Coiling snakes navigate around overlapping pieces of seaweed encrusted with salt-damaged shells, creating a vortex of unbridled nature in Portesa Rockpool. In The Four Elements we are reminded of the figurehead of an antique ship, which has perhaps been left at the bottom of the ocean for hundreds of years, subsumed by not only marine life, but time itself: lizards crawl over her body, coral forms a necklace framing her head, and a serpentine creature seems to be crawling into or out of her mouth. She seems at once lifeless yet also enlivened by the creeping effects of natural activity taking place around her frozen face.

It is this simultaneous evocation of activity and a nostalgic timelessness that renders Beckhouse’s ceramics enigmatic and captivatingly imaginative. Her works immediately bring to mind a fusion of aesthetic trends sourced from different periods of ceramic activity: immediately I thought of the organic, glazed forms of Victorian-era majolica ceramics, in which vibrantly coloured jugs and teapots are moulded with shapes of natural objects such as shells, seaweed, coral or vegetables (stemming from the influence of Bernard Plissy). In their swirling forms and opulence of decoration, they also bring to mind decorative features of the Baroque and Roccoco periods yet their inherent poeticism, muted tones, and referencing of natural forms also brings to mind the celebration of the organic that is quintessential of the stylistic essence of Art Nouveau.

Beckhouse utilises historical precedent as a foundation upon which she expands and develops her own personal expressive approach, intermingling stylistic and personal inspiration to create works that are replete with expressive dynamism and technical complexity. She maximises the interactive potential of sculptural objects to not only bring her subjects to life, but also to invite an active and prolonged viewing experience. In walking around her ceramic objects, our eyes follow the undulating sculptural lines of the seaweed and coral, the intense layering of which rendering this activity relentless, endlessly revealing new expressive content. The pierced quality of the works prompt a further visual investigation of their three dimensional qualities and relation to their space: we can either look through the form to get glimpses of the gallery space behind the object, or we can look into the object and gain an appreciation for its interior complexity.

In their gestural and expressive celebration of nature, Beckhouse’s ceramics are hauntingly and enigmatically poetic. While ceramics may certainly be a ‘trend’ within the arts world at the moment, Beckhouse’s works demonstrate real imaginative potential and technical skill that can be invested within such decorative objects to evoke tangible texture and ambience. Although ceramics are often utilised for their connotations of domesticity, Beckhouse’s objects speak of another world that is imaginatively tantalising in its nuances of mythological fascination and uncertainty.