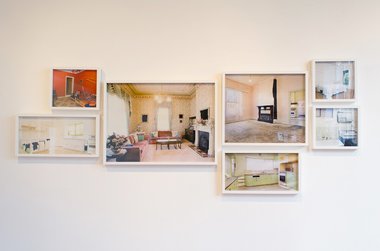 Yet all is not what it seems in these images. They are not simply representations of domestic interiors, but are rather emotively charged re-workings and re-configurings of these spaces. There is a faded, almost blurred effect to these photographs - they do not have the glossy, clear and crisp resolution that one would expect from advertisements selling a home and its interior.

The concept and appearance of ‘home’ is problematized in this exhibition of Breckon and Shaun Waugh’s photographic works currently showing at Enjoy Public Art Gallery. Both photographers use subtle manipulation to distort and challenge the landscapes (be they natural or domestic) with which they work, presenting new connotations through which these spaces can be framed and viewed.

Breckon’s works are powerfully effective in their evocation of a faded lifestyle belonging to a dated past and the attitudes associated with this. Utilising images from real estate advertisements, her photographs are an exercise in surface appearance and the extent to which visual representation can be taken as fact. Their hanging has been executed particularly well in accordance with this theme, their staggered, clumped arrangement bringing to mind the layout of photographs usually seen in interior design or lifestyle magazines.

Yet all is not what it seems in these images. They are not simply representations of domestic interiors, but are rather emotively charged re-workings and re-configurings of these spaces. There is a faded, almost blurred effect to these photographs - they do not have the glossy, clear and crisp resolution that one would expect from advertisements selling a home and its interior. They are slightly textural, as if Breckon has gone over each photograph with small flicking movements of a paintbrush, blurring contours and suggesting texture, particularly in the velvet couch and vase of flowers in the image of the living room.

This distortion hints at a much wider scheme of artist intervention. Viewing Breckon’s photographs is an organic process in which more features gradually reveal themselves. The rippling, crumpling walls of the light green kitchen are glaringly obvious yet also strangely inconspicuous, tucked away in the bottom left hand corner. This was the first indication that all was not as it seemed. I then turned to each image, searching for similar glitches. I noticed black squares on the edge of the bed and on the picture frames in the living room, where it seemed that sections had been ripped and torn away. This tearing action is particularly aggressive in the white kitchen scene, in which the jagged edges of the white and black suggest a purposeful, violent destruction.

This is not an ideal domestic environment speaking of harmony and prosperity; rather it is a decaying, abandoned space fraught with an unknown and indefinable sense of loss and trauma. Is this perhaps a social critique of social deprivation and how it is glossed over in the social conscience? Or does it speak of personal experiences of the artist? Whatever the viewer gleans from these images, they are hauntingly effective, for their subtle manipulation of the photographic medium poetically suggests, rather than boldly asserts, a certain atmosphere that speaks of abandonment, decay, and desolation. (For this reason they remind me slightly of Yves Marchand and Romain Meffre’s photographic series detailing Detroit’s decline.)

Shaun Waugh has similarly interfered with the subject in his photographs, stamping bold patches of colour onto a natural landscape. His shapes are blemishes on this space, blocking the flow of streams and disrupting the harmony of the undulating green hills. This is perhaps a comment on the destabilising destruction of the natural landscape through expanded commercial and residential development. For me these photographs were less effective as they lacked the subtlety of Breckon’s series. While Breckon’s works invite a prolonged interaction from the viewer, Waugh’s photographs seem so overt in their (assumed) statement that I tended to look at each cursorily before moving onto the next.

Two photographers is a small but effective show, demonstrating how the artist can mediate a medium to suggest, rather than simply represent.  Both Breckon and Waugh disrupt the order of their subjects, suggesting new connotations of space, place, and human presence.