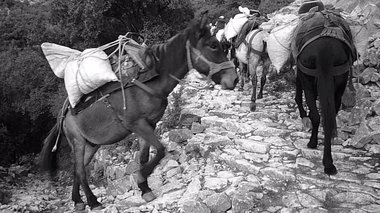 In this complex but fascinating Te Tuhi show, one which focuses on different aspects of time, Bruce E. Phillips has skilfully drawn together a cohesive selection of films, sculptures, videos, soundworks, hoardings, installations and performances. 'Unstuck in Time', as a carefully woven and layered exhibition, examines three sub-themes: the creation of mechanised time; the evidence of deep time; the experience of duration.

In this complex but fascinating Te Tuhi show, one which focuses on different aspects of time - and which has two online publications (plus another to come), and works outside and in - Bruce E. Phillips has skilfully drawn together a cohesive selection of films, sculptures, videos, soundworks, hoardings, installations and performances.

Plus there is a lot of contextual reading, if you are so inclined: there is Phillips’ own long, very informative essay, plus lurking in the background (if you haven’t read them already) discussed innovative sci-fi novels by Vonnegut, Wells, Ballard, Orwell and Atwood. These novels set the scene for the most public of the contributions, the three Reeves Rd billboards of Kerry Ann Lee, visible when looking out through Te tuhi’s front windows with their futuristic (and psychedelic) urbanism, printed surface patterns and extraordinarily fanciful, super-sharp, Pop imagery.

Unstuck in Time, as a carefully woven and layered exhibition - dense with various supplementary artists added via the publications - examines three sub-themes: the creation of mechanised time; the evidence of deep time; the experience of duration.

For the creation of mechanised time, Phillips references the theories embedded in the capitalist methodologies developed by Henry Ford and his manager friend Frederick Taylor (ways of ensuring greater worker efficiency), linking them to the labouring conditions of the Bradford foundries and factories documented by Darcy Lange in his videos of the early seventies. These are surprisingly interesting viewing, monotonous or dangerous work shown on loops that for Lange are unusually short. They are uncharacteristically accessible.

The highlight of this show though is the stylish, moving image work of Nicolas Kozakis and Raoul Vaneigem. Raoul Vaneigem was a Situationist, a personal friend of the radical theoretician /artist Guy Debord, but he left the organisation to become a philosopher and poet. His perceptive and hauntingly beautiful writing runs through this recent black and white video he made with Kozakis, A Moment of Eternity in the Passage of Time (2012). Set on the desolate Greek peninsula of Mount Athos, it is 5 minutes long and shows a solitary man patiently filling sacks with shovel-loads of crushed rubble. Now and then he rests, enjoying a cigarette and the view across the sea. He then loads the bags onto a line of mules which carries them up a winding road traversing a hillside.

….Can existence reduced to survival

Be satisfied with mere shadows of life?

What is built for and by oneself

Happy is he who discovers the slowness of life

As world frenzied by power and money

Is collapsing around him

We do not fully discern how well we have won

Of stones and beasts.…

In its advocacy of slowness this film kicks against the power of the clock, the division of the working day into profitmaking tranches. Across the gallery-space we see Toril Johannessen‘s contribution, a double-sided (non-synchronised) railway clock that is programmed to move in parallel with the global pace of internet traffic. As activity (the machinations of capitalist information exchange) slows down so do the moving hands. And vice versa, when the communication rate speeds up. A send up of profit-seeking delirium.

For the existence of deep time the notion is represented by a superb contribution from The Otolith Group. Medium Earth (2013) is a gorgeously sensual film that revels in the Californian landscape while contemplating the presence of the San Andreas Fault. Long slow pans linger on buckled geological strata, wind-carved boulders, mysterious cracks in the concrete floors of carparks, and traffic-filled motorways on faultlines. Mostly without commentary it finishes by describing the methods of earthquake soothsayers, such as correlating omens from aches in various body parts, continents represented by pains in certain limbs.

The emphasis is on the smallness and helplessness of the human species, and the smallness of course of our own lifetimes and historic epochs. That smallness is compared in Phillips’ essay with the enormity of the damage our species has done and is doing to the planet.

Durational time is more concerned with the ‘now’ of everyday existence, its piercing and insistent stridency as experienced, the fleeting nature of the present as it rapidly becomes past.

Tehching Hsieh‘s documentation of his year-long performance (1981-82) as a homeless person living outside in New York, voluntarily deprived of shelter in extreme weather conditions, focuses on the vulnerability of the human body and the urgency of solving day-to-day problems - such as (obviously) getting food and warmth, or (not so obvious) hiding his illegal residency status. With the seasons being so obvious in a city like New York, the duration of a year long period is clearly marked in stages.

Torben Tilly and Robin Watkins’ sound installation under the long curved iron roof leading into the gallery’s front entrance, deals with the duration of the walk up the path to the glass doors (leaving the road behind), and duration of memory about Grant Tilly, Torben’s late actor father. His recorded speaking voice (a bit like Frank Zappa’s) is transmitted from four speakers spread out in the roof and discreetly mixes with the sound of traffic and birdsong. It is not initially that obvious as an art work, even though the words (taken from a mystical text, An Experiment in Time by J.W. Dunne (1958)), played forwards and backwards simultaneously, sound pretty strange. ‘Past’ and ‘future’ (strictly ‘past in reverse’) are scrambled up to create a new ‘present’.

There is a lot of compelling work to ponder over in this ambitious, subtly sprawling exhibition (including performances) - and this review has touched on only a part of it. There is slapstick humour (Matthew Cowan’s film), facetious commentary on outdoor ‘relaxation’ (Sally J. Morgan’s fishing from a tub as performance), forthright post-colonial critique of other artists (Duane Linklater‘s video), and even sardonic indignation in the face of alcoholic littering excess (scattered beer-can tabs in Phil Dadson‘s installation, perhaps also an attempt to counteract the gallery carpet and lack of industrial ambience).

Plenty to reward the persistent.