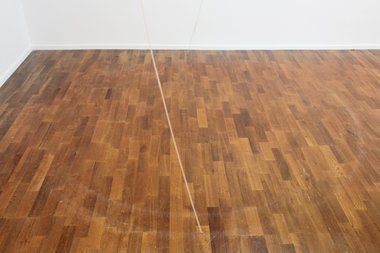 From square we move to circle, a kinetic construction made up of narrow strips of doweling attached together with yellow masking tape to form a taut half circle. This moon-like figure is connected to a motor that rotates the structure from a fixture attached to the ceiling, its ends touching the floor lightly as it turns, creating the form of a perfect circle on the wooden boards of the gallery floor.

One for the game

Pilot gallery in Hamilton has a new sister exhibition space immediately next door which opened for the first time on Friday October 3. Dubbed “Co-Pilot” by Karl Bayly, it is currently showing the work of Wintec tutor, Nick Megchelse. The show is comprised of a collection of paintings entitled, One for the Game, the “game” in question being of course the art one, or more precisely the much maligned painterly one; maligned at least in some quarters in this country where if it’s not conceptual, digital, performance, internet, video, installation or some amalgamated hybrid of the above, then it is deemed insufficiently worthy.

Megchelse has taken us back to first principles. He has no subject other than the art process of painting itself. This is art about art, the art of putting down paint onto a flat surface in a practice that involves no subject other than what it mechanically and physically is. In a kind of back-handed way, the artist could be challenging the current idea that painting has played itself out, is exhausted, has tried all the tricks and as a medium has seen its time come to a fitful end. There are new kids on the block, or old kids in new caps, so move over painting. As if in response, rejecting the Stuckist jibe, the artist drills down into bedrock to, as it were, start over again.

In order to do this, he has reduced his palette and brush stroke to the bare minimum to concentrate on the presence evoked by monochromatic washes and reductive but repetitive gestural mark-making made on relatively small canvases and paper.

There is no high-flown Rothkoesque metaphysic involved here or even an interest in abstraction as such, rather one is presented with just the raw data of pigment and smudge, smear, streak or stain. Sometimes, as in the work No Title (14B) all one sees is the repetitive compulsive action of brush work making thick and almost identical marks in a grid format across the canvas. At other times translucency is the operative effect where delicacy and fine pencil line play off against each other.

Such an exploration of the medium with a focus entirely on materiality, attempting to reach for pictorial complexity with severely reduced means, brings us back to the primacy and singularity of paint and its corporal qualities. Its limited repertoire of notations, forces the viewer to confront the primal experience and simplicity of the globular substance, its colour, and treatment of application afresh.

Damien Hirst once said that he realized one couldn’t use the tools of yesterday to communicate today’s world. That, of course, is only half true. There are still those out there who believe in paint and its capacity to deliver the impact equal to that of a tiger shark floating in a bath of formaldehyde.

Megchelse is like the new technician trying things out, seeing what happens, what comes of simple experiment, unheroic.

Pilot, the mothership next door, is currently offering the work of Philippa Nielsen. Grounded Theory begins for the artist with the unpretentious act of the simple collection of data. This manifests itself most directly in an unadorned piece entitled Photographs, which is just an assortment of snaps held loosely together in an album, consisting of a series of random images which have as their controlling factor, offbeat, guileless, ordinary found things. Items like a half-eaten pie curiously left sitting abandoned in the middle of a tar-sealed road; a dead emaciated rat lying on a front doorstep; a gate with one paling painted in a different colour; a car with stones on the roof holding down plastic sheeting over a window.

Quirky, strange, odd and slightly unsettling as they are, these objects, ordinary enough in themselves and existing in a commonplace world - in being brought together - test or nudge the parameters of reality, questioning the way the world is expected to be. They are what the artist calls “small rifts in the ordinary” that sit on the borders of the surreal, are never contrived and never quite tip over into the fantastic realm. They are merely observed, noted, documented, and as their numbers swell, some theory or hypothesis might be elicited to explain or confront what is already known. The cumulative force of the slightly weird may shift perspective, cause re-evaluation of value or disrupt normal categorization.

Nielsen also plays with the found object in other ways. Green Flag, a shade-cloth together with the “dust of ages” becomes in her hands something resembling an art object, a painting on canvas. The cloth had sat on the top of a circular water tank which over time had burnished into its surface, a large white circle.

Hung in the gallery, this neo-dada piece recalls something from the corpus of Kenneth Noland. Here a randomly ordinary object becomes a thing of beauty whose creation was merely accidental. Out of base material by an ‘alchemical’ and inadvertent process comes an aesthetic construction. Like Wordsworth’s “spots of time”, these are moments of revelation that gift us from ordinary circumstance a glimpse of a world living right alongside the familiar. It’s similar to something Yeats once described; the act of creating beauty by first lying down “where all the ladders start/In the foul rag and bone shop of the heart.”

It is out of her ragged garden that Nielsen gathers her data, from the ground itself where she disputes categories by planting ‘weeds’ in punnets and presents them as if for sale. Oxalis becomes, in an act of reversal of the common binary codes, a new creation.

In the same transmuted manner, common orange mesh fencing, once used to corral her chickens, is transformed into a cube. Plato’s eternal and the architects fundamental is remade from a configuration of multiple plastic mesh cubes that are temporal and tied together with orange thread. Hung like some cage from the gallery ceiling, this installation is the site where garden function meets geometric aesthetic, a DIY with metaphorical potential.

From square we move to circle, a kinetic construction made up of narrow strips of doweling attached together with yellow masking tape to form a taut half circle. This moon-like figure is connected to a motor that rotates the structure from a fixture attached to the ceiling, its ends touching the floor lightly as it turns, creating the form of a perfect circle on the wooden boards of the gallery floor. Operating continuously, it will eventually wear a visible line into the flooring, like the work of some giant ceaseless protractor. Like William Blake’s God, Urizen, leaning out of the clouds to create the world, these flimsy sticks mimic the moment of bodily creation.

Opposite this ‘divine’ architectural contraption, hangs a plumb-line of sorts, suspended from the ceiling - a yellow string weighted to the floor by a small round whitish river stone. We could easily be inside a house of celestial proportion measured in cubits, ready to receive the chaste white stone in which a new name is written, standing before the pure river of life from out of the Book of Revelation.

Inside this gallery of almost empty space, one could almost think such things, in the presence of entities where the ordinary is charged with grandeur, made from elements taken from the contingent and the simple quotidian.