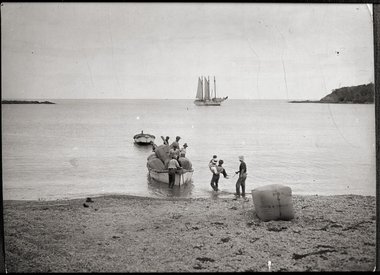 But, this small body of work (33 photographs) in Cameraman with a Mission not only illustrates life and conditions in this relatively remote part of New Zealand in the early 20th century - the cusp of the end of the colonial period and the beginning of a more urban direction - but it also commemorates the intense curiosity of an individual, and one skilled at channelling that impulse into very memorable image-making.

The phrase “history proves” is a bit like its slyer cousin “research proves” (a hammer so beloved of newspaper letter-writers) in that it’s rolled out to support an argument in the mistaken belief the mere assertion indicates some kind of water-tight case, not merely evidence that may, or may not, propose a trend or support a tentative thesis. “Proof” is a conceptual nirvana having little to do with research and almost nothing to do with history. Wanting proof illustrates a need to believe: being committed to research and weighing up the evidence illustrates a commitment to observing the facts and joining the dots. It’s a patient, very agnostic business.

The photographic medium was almost “called up” in the second quarter of the 19th century as the timely handmaiden to a confluence of two inter-related European enterprises having their origins in the previous two centuries. Firstly, the quest of navigators to seek out the furthest reaches of the planet - an exploring going hand-in-hand with exploiting - and discovering geographies and social patterns very different from those at home. Secondly, the great encyclopaedic mission to compile those compendiums of all the world’s knowledge, a spin-off of an Enlightenment assumption that the acquisition of knowledge would automatically dispel ignorance and superstition - an earnest hope later parodied by Douglas Adams in his Hitchhiker’s Guide to the Galaxy, where the Answer to the Ultimate Question of Life, the Universe, and Everything turned out to be the number 42. (Rather presciently, though, this was later explained by the question not having been asked correctly.)

Until the 1980s the question as to what extent documentary photography supplied evidence wasn’t even asked let alone asked “correctly”. A breed of “concerned photographers” arose out of the socialist movement of the 19th century when the effects of the Industrial Revolution began exacerbating social inequalities, and the camera became a handy tool of well-intentioned exposure and activism, and the intensity of the photographers’ fervour and the rightness of their mission tended to suppress any close examination of the relationship between cause and effect, or, say, between their social motivation and a desire for some sort of photographic profile.

Working in the first couple of decades of the 20th century, Hakaraia Pahewa didn’t even know he was a documentary photographer - he was just this guy with a camera taking photographs of what interested him on his beat as an Anglican priest from the eastern Bay of Plenty, around East Cape, to the coastal settlements of the East Coast through to Gisborne. He was clearly an inheritor of the Enlightenment’s encyclopaedic mission, exhibiting a curiosity about aspects of daily life right across the social spectrum. Additionally, Pahewa was also an inheritor of the Picturesque tradition of framing views, as his images are invariably shaped according to the principles of conventional composition. His training at Gisborne’s Te Rau Theological College quite probably involved - if only by osmosis - an awareness of both Pakeha traditions.

His visual talent here points to one of two things unique to the medium of photography - the way an individually-authored body of photographs happens. It’s not so much “doing art” as demonstrating a lively engagement with the world: socially, scientifically and geographically. This seemingly informal way of image-making has always deterred the medium’s acceptance as something more than a mechanical process, and still bedevils its being taken seriously and on its own terms in the art world. There’s a co-relation between the photographic images that are acceptable by the movers and shakers and the degree to which they resemble conventional notions of art: the more they look like “art” the more acceptable they are. It’ll be a long time before the likes of Pahewa will be up for any Arts Foundation awards.

But, this small body of work (33 photographs) in Cameraman with a Mission not only illustrates life and conditions in this relatively remote part of New Zealand in the early 20th century - the cusp of the end of the colonial period and the beginning of a more urban direction - but it also commemorates the intense curiosity of an individual, and one skilled at channelling that impulse into very memorable image-making. If these images don’t immediately align with conventional notions of art, Pahewa’s practice can easily and convincingly resemble an artist’s.

The second thing unique to the medium is how such bodies of work - or random chunks of them - survive. There are countless cases of troves of invaluable material being saved from destruction by the skin of their teeth (library staff have been known to dig glass plate negatives out of a council tip, and the great R P Moore negative archive, now at Turnbull, was saved only because a workman involved in demolishing the former Wellington studio thought they may have some value and contacted the Library), and, who knows what has been lost? It’s not known for sure exactly how Pahewa’s images survived, but in Te Kaha in the early 1920s he seems to have become friends with a young district nurse, Mabel Vos, and the prints in her possession were inherited and recently donated to the Tairawhiti Museum by her great-niece Gwenyth Perry. The images, however, were faded, and in a further twist to this photographic story, they have been digitised, allowing an enchancement to make clear again the fainter detail. Photography’s lesser status puts it at greater risk. If history “proves” anything, it’s stuff like this.

In recent decades photography may have wormed its way into the art pantheon, and now some photographers are accepted and respected as artists - just as artists such as Michael Parekowhai and Jane Zusters are accepted and respected as photographers. It’s not a quid pro quo, though, because the “real artists” automatically have a head start in the credibility stakes. The term “art photographer” says it all - the half-caste with a suite in a five-star hotel. What about all those other photographers with coherent bodies of work and an unassailable curiosity about the nature of the world but unable to stoop down to pass through the door of art’s low lintel? Are they, like Hakaraia Pahewa, doomed to be written-off as lesser image-makers? Also-rans whose work is of no consequence, having a place only as illustrations to an historical record?

Photography was the first truly international visual medium, and during the 19th century images made here were as good as anything made around the globe - when the “real art” being made here was, at best, a pale and feeble imitation of what was being produced in the unadventurous British Isles. This may take a while to sink in, but when it does Canon Pahewa and his cohorts will have their day.

I think Peter Ireland makes good points about both the documentary and aesthetic value of nineteenth and early twentieth century ...

I think Peter Ireland makes good points about both the documentary and aesthetic value of nineteenth and early twentieth century New Zealand photography.

With their sharp, swarming details, photographs from Victorian New Zealand are a little like the pottery left behind from the Pacific's Lapita era. They remind us that the past is as real, as teeming, and as strange as our present, rather than simply the material for myths or historiographical debates. Along with the show Dudley Meadows has organised in Gisborne, Kerry Hines' recently published book of poetic responses to the images of William Williams suggests a new interest in our nineteenth and early twentieth century photography.

When he argued that written documents offered an easier way into the past than oral traditions, the British historian EP Thompson pointed out that an old text, whether it was a letter or a bill or a royal writ, could reveal information and opinions that its author never intended to share with the world.

The same can be said of the sort of the photographs that have survived from Victorian and Edwardian New Zealand. It is often only now, in the twenty-first century, that we an appreciate not just the layers of information but the artistic power in these images.

I say all this as a way of advertising my own fascination with William Temple, a doctor-soldier and amateur photographer who invaded the Waikato with General Cameron's army in 1863 and earned himself a Victoria Cross at the battle of Rangiriri.

Temple documented the progress of Cameron's drunken and erratic army from the redoubts of South Auckland into the enemy's country, struggling all the time with rain and mud and cumbersome technology. He tried again and again to make visual pieces of propaganda, but the limitations of his gear and the indiscipline of his comrades led to blurred images and to mixed messages. And yet Temple's failures seem, in the twenty-first century, like triumphs of unconscious truth-telling: http://readingthemaps.blogspot.co.nz/2012/02/going-to-war-with-william-temple.html