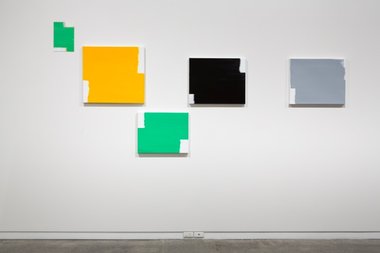 However linger a little longer and it becomes clear that these five paintings are elements meticulously composed to make up one larger work that dominates the wall. There are scrupulous alignments, negative shapes and counter rhythms that pull the whole group together into a cohesive and satisfying configuration. If you bought one item, you'd really have to buy the lot (they are listed separately in the catalogue) - and make a record of their exact positioning.

In this intriguing assortment of paintings from eleven ‘abstract’ artists, in-house curator Mary-Louise Browne encourages juxtapositions and references from a variety of working processes, looking at ideas behind different support materials and surfaces, and distinctive approaches to colour application.

Such an exhibition indicates that there is a lot of painting currently being made. One might even suggest that in the last two or three decades painting has never really been totally out of fashion or on the verge of disappearing. These days it is not uncommon to find exciting videos and paintings made by the same artist. At one time the two mindsets were in opposition.

So with the title The Smoothing of Things, are we thinking about the flattening of painted objects or of qualities, shapes or forms on - or in - them? Or a smoothing over of ‘content’? To help us ponder these issues, the gallery provides a nimbly worded, erudite essay by Glen Snow, looking at ‘smooth’ as adjective or verb, bouncing it against studio activity and art historical (Greenbergian) analysis while also referring to some of the ideas promoted in the big painting show currently on in MOMA, The Forever Now - such as atemporality.

Positioned around the large downstairs gallery, with a couple also in the office, Browne’s selection invites you to form mental groupings and oppositions, comparing artist mindsets, some of which (your comparisons) might possibly turn out to be - after further consideration - superficial. Their use is that they provide hooks that take you off into unexpected directions.

Take Callum Innes’ subtractive painting (Exposed Painting Cadmium Orange, 1992) where the top coat of orange that once covered the ‘white’ undercoat has been carefully removed with turps, all except for a large square on the left that has a tiny trickle cascading off its bottom righthand corner.In the opposite corner David Thomas, the influential university lecturer from Melbourne, has a suite of five paintings that seem all about additive processes, where the top layer has been loosely added to leave small rectangles of under painted white in two diagonally opposite corners. The work seems to be about chromatic extension, a meditation on applied colour as a planar expanse.

However linger a little longer and it becomes clear that these five paintings are elements meticulously composed to make up one larger work that dominates the wall. There are scrupulous alignments, negative shapes and counter rhythms that pull the whole group together into a cohesive and satisfying configuration. If you bought one item, you’d really have to buy the lot (they are listed separately in the catalogue) - and make a record of their exact positioning.

Jan van der Ploeg has three ‘grid’ or ‘pattern’ paintings where complex negative shape is also crucial. Made in two colour and four colour combinations with stacked modular motifs (a bit like Islamic tiles) these ‘sawtooth’ images are particularly mesmerising, partially due to the tension between diagonal alignments and the vertical - an area Richard Killeen effectively explored in the mid-seventies, pre-cutout. In this show Selina Foote provides an excellent foil to van der Ploeg, with her paintings on stretched silk that present unpredictable topographical clusters of linked up lines.

Simon Morris’ paintings here are about colour that is methodically diluted, bands of built up saturated colour placed alongside strips where the pigment percentage are much lower. In contrast a pair of red Julian Dashper works (diamond shapes containing large white circles with centrally positioned red dots) are about colour that stays matched in intensity but with the chroma in one altered. It has an added pinch of yellow that is barely detectable.

Another pairing could be John Nixon and Leigh Martin, where thickly woven hessian is contrasted with more compact linen, and coatings of silver enamel are compared with very thin washes of ‘inference’ pigment where iridescent wavelengths suddenly switch over. Muscularly textured but nuanced sheen is compared to an even more delicate shimmering.

One other mental juxtaposition that seems obvious is the work of the oldest artist here alongside the youngest: Milan Mrkusich next to Rohan Hartley Mills; Staccato Ostinato (1966) with Wrapped Painting (2013). Both use dots - one type button-like, pulsing discs; the other quickly made, spaced-apart daubs from an oily brush-tip. One a hermetic universe of Jungian symbols, the other a jumbled collision of wallpapers or fabrics painted around the midriff of the canvas. Careful preplanning versus looser (through carefully controlled) exuberance.

A final coupling, not mental but physically next to each other on the wall, is from Jan van der Ploeg and Noel Ivanoff. Van der Ploeg’s small two colour abstraction Grip (2000) looks like a horizontally erect penis placed inside an accommodating orifice, while Ivanoff’s painting is called Digit Painting (2013-14) because he has used his finger and a stabilising rule to control the horizontal application of thick viscous paint.

At the risk of appearing unduly provocative, it seems reasonable to ask: is there an unintended lewd and acerbic joke within this pairing to do with penetration and the tactility of painting - finger, penis and brush being an extension of masculinity as often critiqued by camera wielding feminist artists in the early eighties? There is humour in both works - granted arrived at in isolation - but when they are placed together this is intensified to create a fortuitous flashback and pithy artworld observation: One woman painter can be seen contributing to The Smoothing of Things (2015); and if you count them - ten guys.