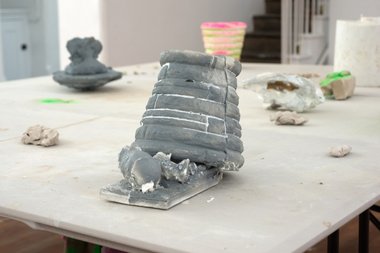 What seem to be textured polystyrene, china and baked clay objects in the gallery and office are really made of polyurethane. Phallic toadstools, strange mountainous heaps with exposed body parts, enshrined pixie houses, swollen flowers and cacti, thick walled buckets, a raptor with outstretched wings squawking over its chick, bulbous piggy banks, lumpy relief abstractions; all these are presented in peculiar colour combinations - with the applied paint independent of form, or acting against it.

A series of nine wall hangings by Dan Arps, garishly coloured drawings printed from a computer on to satin, line the walls of Michael Lett’s main Auckland gallery - along with three wall reliefs (mutated garden decorations in theme) cast from moulds.

Other versions of those casts (painted or hung a different way) lie on a set of eight collapsible tables that are like an improvised studio, with crud, bits of clay and parts of moulds scattered on the floor. The tables dominate the central space of the gallery with soft toys suspended from underneath. There are also squashed spray-painted boxlike houses and modernist theatre models of hardboard and silver foil on the floor, abandoned down in the shadows.

The pleasure in this show lies in the scrutinised detail, in discovering repetitions or duplications, exploring linking cross connections within the large ‘studio’ installation and array of satin hangings.

In his sculpture Arps uses casting and paint to confuse you (much like Hany Armanious, but not so formally presented). What seem to be textured polystyrene, china and baked clay objects in the gallery and office are really made of polyurethane. Phallic toadstools, strange mountainous heaps with exposed body parts and rags, enshrined pixie houses with steps and casks, swollen flowers and cacti, a raptor with outstretched wings squawking over its chick, bulbous piggy banks, thick walled pots, lumpy relief abstractions; all these are presented in peculiar colour combinations - with the applied paint independent of form, or acting against it - in an anarchistic, disruptive treatment of three dimensional surface.

With Arps’ digital prints on satin, we find spontaneous (all hand and no eye) and fragmented drawings placed over images lifted, distorted and mutilated from what seem to be the cartoon imagery of video games. He obviously has a cache of stored drawing elements that allows the same identical motif to be used in different works. With the sheets of soft flowing fabric he gets a wide range of hues, from full on, high saturation intensity to very faint, pale, linear marks that - with the addition of a delicate accompanying ‘shadow’ - look exactly like drawings embossed; a visually unnerving quality that is clearly tactilely impossible with floppy satin. The works also have a surface quality that is like that of silk scarves, a sheerness or smooth sensuality we associate with fashion accessories, as if they should be taken off the wall and worn.

Parallels then in this show are presented between digital storage systems (with their propensity for assisting two dimensional hybrids, or/and, as in the case here, an edition of 5 for each final image) and fixed moulds for sculpture. The prices on the catalogue have the wall hangings at half the cost of the sculpture, but one could easily imagine Arps flipping things over and making exact replicas of the sculpture - in editions with identical surface treatment in colour - and hangings where variations from stashed drawings are more pronounced. The sculpture need not be always more costly than the prints, for the emphasis is on process and production method.

Of course it is not only that, there is a pronounced Arps visual aesthetic as well, one that embraces accident, the conventionally ‘ugly’ and collapse of form - infused with what one might consider ‘decrepitude’ or ‘disease’ - where the artist continues his aggressive exploration of a new and memorable visual language.