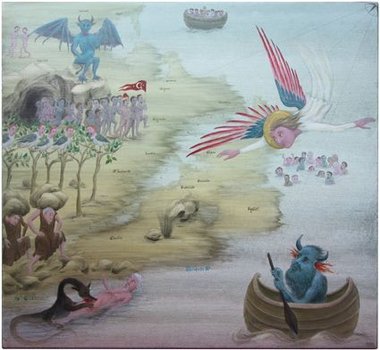 This has been an artistic ruse for some time, making little allegories about New Zealand history where the geography is home-grown but the typography otherworldly. Ancient mythology is here abutted with contemporary events to produce political observations in an amalgam of the fantastical and the real. Medieval text and illuminated manuscript is Mortimer's modus operandi for seeing that Biblical symbolism is used for postcolonial political comment.

Art competitions. You love ‘em and hate ‘em. There’s the hype, there’s the hoopla and then there’s the art. And then, not to forget the most important bit, there is the money. At least in the Wallace Art Awards the money gets shared around among seven entrants, from the “Paramount Award” right down to the “People’s Choice Award”, all of which is good and democratic. Even better, the money comes in the form of various residencies in several places across the globe - New York, Switzerland, San Francisco and Vermont, where studios are provided along with support staff, access to lectures and field trips. It makes intelligent sense.

The other divergent element in the world of art awards that operates here is the appointment of seven judges. Seven sounds a tad excessive, but at least it takes out the singular and subjective judgment of what is normally the role of one adjudicator. The judges in this case were Manulani Aluli-Meyer, Andrew Clifford, Richard Maloy, Andrew McLeod, Peter Panyoczki, Terry Stringer and Linda Tyler.

But that apart, it is the winner people have, by and large, come to see - and in the 23rd Annual Wallace Awards, the supreme winner was a curious little work, set as it was among all its rather grand avant-garde neighbours at the Wallace Gallery in Morrinsville. It almost looked out of place, and quaint, even a little twee, being a rather ‘conventional’ painting by Roger Mortimer, with a subject that ostensibly reaches back to the time of Dante and Giotto. In fact it could have come straight out of the Inferno.

Sitting prominently in the background of the painting is a horned devil, Satan himself, perched on a rocky outcrop - wings stretched out drying like some singular shag - and taking in the view below. In the foreground a dark menacing dragon, presumably from the book of Revelation, is devouring a naked victim it has dragged into the sea. There’s a troop of naked saints marching behind a flag bearer, adjacent to what looks like an orchard of apple trees that is possibly a new Garden of Eden. Above this spectacle, set on some coastline, an angel does an aerial swoop, arms extended in a free fall dive. Perhaps it is Gabriel come to announce the end of the world.

It is the figure in the more immediate foreground that alerts one to a twist in this otherwise recognizable trope. The blue tinged, muscular person in possession of a somewhat enlarged head, paddling a small canoe, looks slightly familiar. He in fact, in modified form, looks like someone straight out of Issac Gilseman’s View of Murderer’s Bay, for Mortimer has added devil horns and fire issuing out of his ears - thus demonizing the chap. When the title of the work, Otago Harbour, is added to the picture, things begin to fall in place.

This has been an artistic ruse for some time, making little allegories about New Zealand history where the geography is home-grown but the typography otherworldly. Ancient mythology is here abutted with contemporary events to produce political observations in an amalgam of the fantastical and the real. Medieval text and illuminated manuscript is Mortimer’s modus operandi for seeing that Biblical symbolism is used for postcolonial political comment. It could be seen as having shades of Colin McCahon with his crucifixion in the Nelson Hills (being suitably ‘naïve’ in style) but in Mortimer’s case the metaphysics are used for other means.

The theme of death is continued in the selection of the first runner-up, the Kaipara Wallace Arts Trust Award Winner, Glen Hayward and his skull of a rat, 50 cent vs count of fate. This looks like some bizarre toy that has fallen out of a cracker in a convent.

Skulls seem to have made a comeback since Damien Hirst first made them popular, but this is no voluptuous jewel encrusted creation. Rather it is a delicate life-size trompe l’oeil, a hand-carved painted object, a super-real construction that generates the same sudden revulsion the real thing would make. A sort of readymade in reverse, made of rimu, this object - pinned to the gallery wall with a single nail - could be the ultimate memento mori piece or simply a small monument to manual dexterity and craft. Both poignant and repulsive by turns, it hangs alone on a large high wall that makes it equally of less consequence and more.

Ruth Watson, winner of the Fulbright-Wallace award, continues her practice of map-making, but this time worked out on a naked mannequin of a young girl, and exploring inner territories using graphite and acrylic paint. David McCracken does his impression of tractor tyres in Corten steel, while the duo of Raewyn Turner and Brian Harris create a fusion of organic and inorganic form, where nature and culture collide to present a kind of aerial receiver - a dome made of fruit tree branches - listening in perhaps to a world under ecological pressure and stress.

Against the finely wrought works like Noel Ivanoff’s minimalist piece, Slider-Black 1, and Stephen Ellis’s meticulous and time consuming ballpoint pen creation, The Anchor Drags, there were selected a number of entries which might be classified as “slacker” art. More examples of this category, by younger artists, are making their presence felt in various shows, stuff that is seemingly dashed off and held together with pieces of old torn masking tape, or involving other bits of detritus. Matt Arbuckle’s Show Me, Don’t Tell Me and Elke Finkenauer’s Where you thought you’d be are classic examples, as is Glen Snow’s Slapshod. Located somewhere between the two is Shelley Norton’s Daily Dada and the slightly more refined Drawing Study for Painting (Diptych) by Rohan Hartley Mills, with his simple nylon ‘skipping’ rope constructions.

The sculptural entries displayed an engaging variety of ideas and forms, ranging from Paul Hartigan’s neon candy-floss light tubes, Rumble, to Natalie Guy’s evocative retro bronze, form for modern living. The funniest would have to be Stuart Bridson’s Kitset Sculpture Number Ten, a box complete with all the paraphernalia for making one.

Special mention needs to go to the video work of Shannon Novak for his morphing abstractions called Lunations, Jessica Pearless for After City Lights, and Mark Rayner for his creepy portrait of convicted New Zealand killer, Helen Milner, created using the medium of hand hooked rug wool. Titled Black Widow, it recalls the infamous Marcus Harvey painting of Hindley from the Sensation exhibition of Young British Artists in 1997.