Robert Leonard Looks at the Sixties 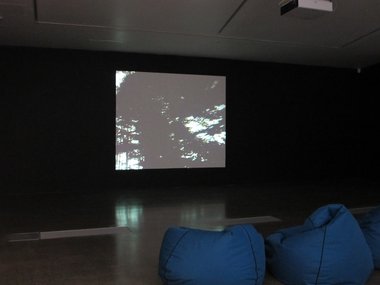 For a novice filmmaker, Charters' filming and editing is extraordinarily inventive, while packed with carefree, insouciant ambience - ably assisted by an eclectic but rousing soundtrack by the La De Das. His playful shots and unusual angles, such as those of repeated, undulating road-markings and inverted / skewed roadways by day, or the glowing Civic Theatre corner and blinking fast food joints by night, make this short but punchy movie a real treat.

1966 will always be in my mind a year that was momentously special. I was a gawky, spotty sixth former, a non-sporty invisible Christchurch kid obsessed with exploring pop music, but when I heard the Beatles’ Revolver and Dylan’s Blonde on Blonde I realised both records - so sensuously (and sensually) radical with the Beatles’ sound-tape reversals and Dylan’s weary amphetamine soaked voice - were utterly unlike anything I’d ever heard before.

The London-based ‘swinging sixties’ still fascinate, as does American music and art of that time. (In 1966 the comparatively unfamous Jim Nutt began his extraordinary Plexiglas paintings in Chicago.) Now Wellington curator Robert Leonard has organised a show that examines urban life in Auckland that year.

I’m typical of my generation in my enthusiasms, but Leonard was born thirteen years after me, in 1963, the year before the Beatles came to New Zealand. (I once waved to the Fab Four one cold winter’s afternoon as they - the ultimate rock royalty in their flash limousine - were driven across the Fendalton Road bridge, near Hagley Park, on their way from Christchurch airport to the United Service Hotel. I remember it vividly.)

Leonard’s exhibition juxtaposes a second year student film made by Rodney Charters at Elam in 1966, with a bunch of Gary Baigent photographs (1963-67) - mostly taken from The Unseen City: 123 Photographs of Auckland, a book published in 1967 - and a suite of Robert Ellis ink drawings (1962-68) accompanied by an Ellis motorway painting (1966). The show vibrates with energy and atmosphere, released into the gallery by these three (what Leonard calls) ‘time capsules’ from fifty years ago.

In an essay for a coming gallery publication, Leonard discusses these works as indicators of the arrival of two new salient phenomena: Firstly the burgeoning presence of youth culture in urban centres (its symbolic resistance to the ‘establishment’ of its elders apparent through its conspicuous music, fashion and particular modes of transport); Secondly the rise of the availability of cars (or motorbikes) led to the physical mobility of young people, and motorways that like giant strands of spaghetti crisscrossed, encircled and linked up our main cities. As indicated by Ellis’ painting.

The exhibition of Gary Baigent photographs presents a mixture of published and unpublished images, as not all the negatives used in the original Unseen City book were retained by the artist. With the cleaning up of twenty negatives - overseen by Haru Sameshima - for printing by Opticmix and mounting on panels for the exhibition, only twelve are from the book. However there are two open copies of the book viewable in a vitrine next to a plasma screen where the entire sequence of black and white images is flicked through. The publication was anti-coffee table, being radically raw with its smudgy rejection of slickness or the ingratiatingly pretty, and use of cheap unglossed paper. In those pre-Eggleston days colour was unthinkable for photography; mere touristy crap - not for intellectuals.

What strikes me is just how similar university/art school/gallery/pub/coffee house life was in the main New Zealand cities in the late sixties. There wasn’t a lot of difference between Dunedin, Christchurch, Wellington and Auckland in student life styles, despite the size discrepancies within the four cities. Those motorways were essential links because nobody flew.

For me the most amazing revelations in this show concern the Ellis pen and ink drawings and the Charters film. They are more formally sophisticated than Baigent’s unfancy photographs, more acutely sensitive in compositional nuance.

Robert Ellis‘ drawings capture his excitement at the possibilities of exploring by car (he had purchased a Ford Prefect after arriving in New Zealand in 1958), and reveal his exuberant fantasies of towering densely packed buildings and impossibly steep concrete loops. His spontaneously virtuoso line and wild imaginative leaps even extend to an almost Sci-Fi version of his wife’s ancestral marae at Te Rawhiti, a rural community up north in the Bay of Islands where in actuality there was barely a dirt road. Ellis’ improvised sketches are so fresh and dynamic they seem like they were executed yesterday, though as an illustrative style they look generically late fifties. Their wonderful spontaneity and inventiveness lift this show to another level.

A similar emotional power comes from the student film made by Rodney Charters, a short narrative about a girl and boy on a motorbike, travelling from Whatipu Beach, through the Waitakeres and Titirangi, and then New Lynn to inner city Auckland. For a novice filmmaker, Charters’ filming and editing is extraordinarily inventive, while packed with carefree, insouciant ambience - ably assisted by an eclectic but rousing soundtrack by the La De Das (of How Is the Air Up There? fame). His playful shots and unusual angles, such as those of repeated, undulating road-markings and inverted / skewed roadways by day, or the glowing Civic Theatre corner and blinking fast food joints by night, make this short but punchy movie a real treat.

Despite what I been saying so far, there is more than nostalgic pining involved here. The placing together of these three selections reinforces the incremental growth or earlier stages of certain slices of contemporary life we tend now to take for granted; they are so ubiquitous and embedded as ‘normal’ or ‘essential’, it is hard to imagine living in an urban environment without them. Indeed, this fabulously interesting show makes us think about the dynamics of change, how various phenomena (all phenomena) arrive, develop, wither and then eventually depart.  Though it might seem laughably crass to state, nothing stays forever. Not even the youth market, automobiles and motorways.

I'm very sorry to hear of the recent passing of Robert Ellis. I've always loved the Cosmopolitan City series of ...

I'm very sorry to hear of the recent passing of Robert Ellis. I've always loved the Cosmopolitan City series of the mid sixties--those labyrinthine networks in aerial perspective--and the wonderful drawings he contributed to Robert Leonard's brilliant Unseen City show at Te Uru in 2015. His use of oil paint within the conventions of map imagery was sensational.

EyeContact sends its condolences to Elizabeth and the whanau.