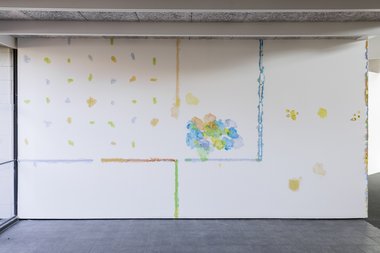 Rather than a resolved, compositionally (and chromatically/tonally) impeccable, finalised statement, Snow here draws out different processes of paint/bog application and wall surface manipulation, avoiding any concern with a dramatic or visually seductive dynamic - and instead incorporating in situ references to architectural fittings close by.

Glen Snow is known for his small, quite intimate paintings that involve an inventive use of gouged-into plywood and jammed-in coloured carpenter’s bog - the latter often functioning as a variety of glue. In Te Tuhi he now focusses on their ‘drawing wall’, exploring different processes of ‘mutilation’ and ‘repair’ whilst incorporating in situ references to architectural fittings close by.

Rather than a resolved, compositionally (and chromatically/tonally) impeccable, finalised statement, Snow here draws out different processes of paint/bog application and wall surface manipulation, avoiding any concern with a dramatic or visually seductive dynamic. You are pulled in close, but by different means.

Snow has 3-4 base paints that he mixes on the surface of the wall - pastel-hued squirts of tinted polyfiller that he churns, smears and scrapes into further chromatic variations. Many of these he has wiped against the outer corner edge (on the right) to create a vertical line of descending, protruding, coloured blobs. On the upper left is an airy grid formation of squares (thin tapelike lines of right-angled corners cut out of the surface (Gib-board) paper) that references the grey floor tiles and grouting that separates them.

On the right are yellow clusters of small chunks where circular bits of wall have been pulled out and reinserted. They reference tightened bolts and nuts in the beams holding up the ceiling. There is also a thinly painted yellow circle that mimics the round fittings for inserted lightbulbs, a horizontal line that extends out from the lower row of windows, an empty vertical rectangle that alludes to the nearby outside glass door, and a thin oblong that correlates with the window frame thickness.

There is a lot to puzzle over here, for traversing the wall are many strange indentations, wobbly smears and delineated proportions. Inside the cut-out/resurfaced lines with their squelchy multi-coloured protrusions are peculiar variations (in grey-tone and of crumbly, flaky texture) of hacked-out to be squeezed-back-in, plaster inserts.

Overall the wall has a vague flaglike appearance with its discrete section of ‘corners’ in its top lefthand section. If read this way, as a tatty sign of national identity, the solid incrustations on the righthand edge are extra amusing. The image’s linear accentuations confirm the wall’s function as a support for drawing rather than painting, drawing that uses sculptural and painting methodologies to manipulate materials as a means of conversing with the interior architecture across space.