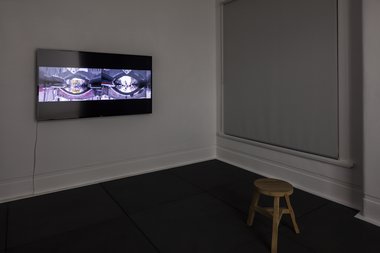 With the split screen, Dadson approaches most dark archways from both sides simultaneously, at same time of day so that the light matches. A few he mixes up for the occasional burst of ‘spontaneity', and of course others he (in classic Dadson fashion) inverts. The water is so still and ripple-free you have to blink to make sure that this is happening, that it is really is topsy-turvy.

This show gives us the chance to see the work that Phil Dadson presented in Venice over June as part of the Nine Dragon Heads collective’s Jump into the Unknown, as well as one other video made for Werk/Kunst/Werk in Kassel, another (featuring Rangitoto) first shown in Te Tuhi’s Unstuck in Time, and a large suite of graphite drawings on black paper made in February.

The Rangitoto video (Compass of Frailty) is better presented on a monitor than as an installation with kayak, so at Clark’s, that is a treat. The German work (Heavy Metal (Schmidtsche Schack Factory Percussion Ensemble)) I’m not sure about. It is just not convincing. My view is that genuine talent in music and art is a rare thing, and that idealistic notions of democracy and community participation don’t succeed in erasing an obvious gap between certain gifted individuals (who have a calling and instinctive bodily inclination for things like timing and placement) and other inexperienced folk temporarily participating in an experiment at their workplace through the generosity of their employer. Beuys was wrong. Not everybody is an artist.

With Anatomia Sonora da Camera one is struck by the beauty of the Italian music Dadson has chosen (interspersed with his own singing) to accompany his kayak as it glides under a sequence of over 28 bridges. I’m quite ignorant of a lot of traditional European music, so for me the emotional intensity was a bit of a revelation. The sound has a slight echo as if played and recorded under the horizontally curved structures, in the canoe. Maybe that is post-production?

With the split screen, Dadson approaches most dark archways from both sides simultaneously, at same time of day so that the light matches. A few he mixes up for the occasional burst of ‘spontaneity’, and of course others he (in classic Dadson fashion) inverts. The water is so still and ripple-free you have to blink to make sure that this is happening, that it is really is topsy-turvy.

Looking at Dadson’s twenty-eight daily drawings made last February (February Music), with grey lead graphite on heavy black painted paper, compositionally many of them seem subconsciously to reference Hotere paintings of the early seventies, with their motifs of circles, St Andrew’s crosses, and horizontal or vertical bars. Of course the surface sheen and hairy textures of the pencil on matte paper (that as ‘scores’ could also apply to camera movement) are very different from lacquer paintings that include unmodulated colour, but nevertheless there are correlations.

I think I prefer the wilder - less pristine or contained - Dadson drawings, such as those that have overlapping (somewhat frenzied) circles of different sizes diagonally aligned, or where fragmented lines and flying specks under whirling bars are chaotically spewed out as if radiating from a central point. The two-dimensional graphic dynamics also seem inspired by Peter Roche’s kinetic sculptures of the nineties, as if quickly drawn (but dense) vector diagrams of mechanical motion inspired by the Futurists.

Also included in this show are two larger works that are more striking than any within the row of February Music images, even though they are awkwardly tucked into corners. They are closer to a suite of much bigger still drawings that Dadson once displayed in Artspace in the mid-eighties, that were more physical in terms of arm’s reach and human height. Less ambitious and not so time consuming in production, the current silkier February Music versions are more about testing the compositional principles of various morphological ideas, as well as being being easier to frame and a bit more domestic.