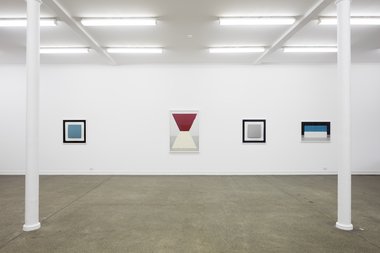 What makes these images special is the artist's interest in scale, for his transformation of the subject from tiny blocks to formally imposing imagery with textured surfaces is startling. The original objects by themselves are barely noticeable, especially when in the state of unpainted raw wood. Now, when coated, photographed, enlarged, framed and on a wall, they compete in size with a standing adult.

Gavin Hipkins is much admired for his innovative exploration of photographic techniques, exhibition (and explorative film-making) formats and nuance of image. In this show he presents eight works in the large downstairs space (and two in the stockrooms upstairs) based on very small children’s blocks (barely an inch tall) that he has painted with a brush. These wooden objects he has very carefully photographed frontally - or from above - so that the enlarged bristle marks and fortuitous ridges are captured by the raking light. Sometimes they are single blocks. Other times, one is stacked on top of another.

His method emphasises their geometrical shape and coloured plane, and lets blurred focussing on the other outer edges become just as important as the crisp definition around the plane at the centre. When he has finished photographing a block or two he removes the paint and reapplies several coats of another colour. When enlarged, the paint looks thick and viscous, with ridges as well as (earlier) competing directions coming through from underneath.

Most are documented directly on a small table with the camera at the same height as the object’s middle, while a few are presented looking downwards from above. All the images have thick white frames, but these last ‘aerial’ ones, more than the others, present three concentric frames around a square plane and are striking physical objects because of that. The others are less symmetrical and have horizon lines where the blurry background is divided.

Not only does Hipkins have the knack of picking really good colours (singles or paired combinations), such as oxide reds, creams, icy whites and charcoal greys, that go well with his ‘neutral’ hazy backgrounds - but the blocks themselves are never perfect in their form. The corners are usually rounded, a bit battered, the edges chipped and wonky - and sometimes the diagonals are subtly warped.

Occasionally the camera is not set in front of the absolute centre so that there is a tiny receding planar glimpse to one side if you look carefully. Also sometimes strange optical effects occur, where the edges are mysteriously inconsistent. One side seems to sink into a quantity of soft cheese (there can be an odd confusing border where the distant table advances towards you, past the block) while the other edge is obviously in front of the background.

As wonderful enlargements these small toys take on another quality when they become monumental and available for contemplation. Some of the bluish or red colours appear to have a hint of the iridescent or the metallic, and tonally these modified objects juxtapose dramatically when stacked.

It is amusing that Hipkins calls these works ‘paintings’, even though he is clearly referring to a series of unique photographs (no editions) of painted blocks. It is a bit like Boyd Webb referring to his early photographs of dioramas as sculptures, cognisant of the fact that the photographs are obviously three dimensional objects anyway, and he wanted to refer to the content of the photograph.

What makes these images special is the artist’s interest in scale, for his transformation of the subject from tiny blocks to formally imposing imagery with textured surfaces is startling. The original objects by themselves are barely noticeable, especially when in the state of unpainted raw wood. Now, when coated, photographed, enlarged, framed and on a wall, they compete in size with a standing adult.

For those interested in art history, as glassed over images of painted surfaces they can also remind viewers of Walters’ diagonals and charcoal tones, Mangold’s geometry and oxide colours, or Rothko’s symmetry and soft edges, while in terms of ‘woody’ texture you might think of Andre or early Di Suvero. The enlarged paint has a slight sheen, and with this light glistening looks fresh and oddly succulent.

This sensuality brings with it a sense of inner life, and is typical perhaps of Hipkins at his very best, when the depicted items have a knowing fetishistic quality, an aspect that goes way back to his Zerfall series of the mid-nineties - and earlier. As kids’ toys these blocks can be imbued with meaning about how we interpret sensations and develop listening, speaking, and observational skills to acquire knowledge, yet Hipkins’ transmutation (with its focussing and symmetry) introduces something else: a micro-world zoomed in on, that has its own quiet flickering pulse - and beckons.