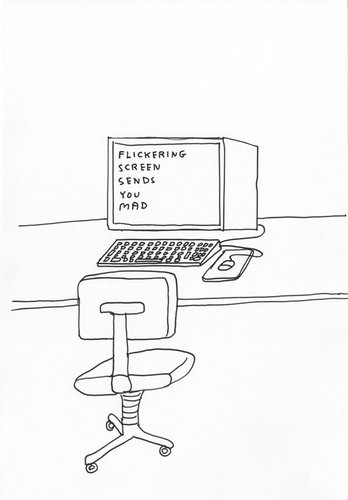 Here is another way of putting it: The work exudes a putative indifference that broadens out from an aggrieved sense of existential nihilism. You wonder whether Shrigley's written mistakes are contrived as a branding device, or are they really something he is incapable of preventing? And if they are unnatural, a contrivance, is that motivated by appealing to a certain audience, or something else: a philosophical position where the world is profoundly rejected.

Last March English artist David Shrigley presented a show downstairs at Two Rooms of colourful oil paintings made during his residency here. This upstairs exhibition (in the smaller narrow space) displays the drawings he also made over that same visit, his drawings being a form of amusing cartoon accompanied by text, rendered in the linear genre popularised by say John Lennon or James Thurber, and which he usually publishes collected in hardcover books.

Shrigley’s ink-lined images are by conventional standards, scratchy, wonky and ‘ugly’. He specialises in drawing that rejects elegant draftsmanship in favour of an amateurish ‘inept’ look that most of his audience like to giggle over, something that the artist encourages in a double game which fluffs over questions of intention and manual skill, but which also has an emotional immediacy via his interest in paradox, contradiction and wit.

All this is mingled with a sense of misplacement, of constantly being in a wrong location all the time: lost, and agitated about that dislocation. There’s a constant anxiety about not quite being in control, accompanied by the suspicion that ultimately the world lacks meaning.

Here is another (slightly pompous) way of putting it: The work exudes a putative indifference that broadens out from an aggrieved sense of existential nihilism. He is trying to negotiate his way through the world, and as part of that, his art career.

You wonder (for example) whether Shrigley’s written (or outlining) ‘mistakes’ are contrived as a branding device, or are they really something he is incapable of preventing? And if they are unnatural, a contrivance, is that motivated by appealing to a certain audience, or something else: a philosophical position where the world - or the world’s history - is profoundly rejected: like say that indicated by Georg Baselitz’s inverted images which he paints directly upside down.

Sometimes Shrigley’s images look almost sophisticated, or like proper drawing. Take a peek at the comparatively conventional works like the ones of a vigilant hound or a computer on a desk.

It is difficult to pin down what makes these works so attractive when they really ‘work’. Some seem to show the artist being anxious about his career and sales, and revelling in introspective mutterings pitched without irony (is that possible?) to the reader - using ‘honesty’ to grease up a potential purchaser.

Others amuse because the language contradicts the image. He likes to tease. A frog is not a slug, so hopefully that little amphibian fellow we see is safe. In another, “Restrain yourself’ applies not to the person holding the rope, who is restraining somebody off-picture, and who has not tied up themselves.

The intestine drawings are killingly funny because of their sly ambiguity. The piece of bowel wearing a top hat could be about the alimentary or the aristocracy. “Precious liquid is leaking. It is wasted” might be depicting draped guts, or plumbers’ pipes. And what is ‘precious’? Water? Liquid shit?

Also intriguing are the ones about obstacles and thwarted ambition. The elephant is the obstacle but the rabbit isn’t. One is a wall and the other is the naked artist.

So is the inability to spell or to mentally preplan (a drawing) a ‘wall’ for this artist? The receding concentric frames of ‘Agreement’ seem to be a tip of the hat to the Beatles’ Hullo,Good Bye, and funny because even alternating the words ‘yes’ and ‘no’ within short running phrases presents serious difficulties for Shrigley. So it appears.

‘Story Being Written’ depicts a piece of paper that partially exposes a written narrative. Instead of cross-outs we are teased by the absence of words outside the drawing, beyond the drawn upon paper sheet before us, and the partially exposed drawn sheet. As for the small cross-outs, they seem rigged and not genuine, as the same word (‘punished’) briefly started, is merely moved along the line. Either way Shrigley wins. It is still funny.

One wonders too about another drawing of overlapping concentric circles, rippling out from the corners. Halfway down the artist has written ‘happiness’ on the lefthand side, on a curved line. This he has then crossed out, and rewritten again, lower, on the right. It seems to state happiness is perfection, the right to position things exactly as you want them, and leave all indications of past processes standing, without embarrassment.

Another drawing - a coincidental surprise - connects with Ronnie van Hout‘s reference in his early photographs to Colin McCahon, where a line of freestanding capital letters set against McCahonesque hills declares the presence of the Undead. Shrigley has, by comparison, three crossed out messages, nestling in an undulating landscape, that communicate effectively as traces of erasure. Though no longer efficacious as living communicators these texts, as ‘corpses,’ have a dark presence, like switched off electronic signs. Though stated as ‘deleted’ they are in fact only crossed out; obliterated, but not with vestiges removed. They dominate the drawing in a way that no deleted images could.