James Ross at The Pah 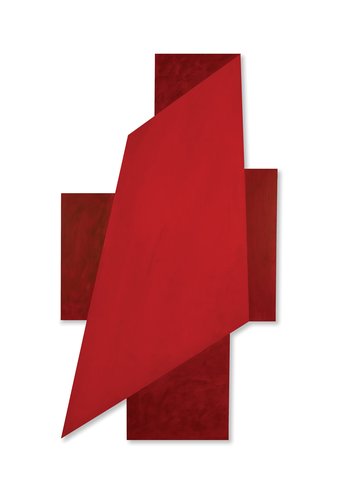 Ross's exhibition is a survey - one that is tightly organised - consisting basically of two bodies of relief painting that pivotally revolve around one work - Red Interior (b), 1994, in the landing. With its tilted trapezoid plywood shape and strange cross, it links both series: an large-scaled earlier one of organic body parts, anamorphic skulls, elongated moons and shimmering water motifs; and a smaller-sized later series of glass panels held by screws in front of kitelike, composite quadrilateral forms.

A week ago I wrote about the Richard McWhannell show downstairs at the Pah Homestead, but above that presentation, on the top floor and landing, is also a very fine show by James Ross. It’s not a sampler or taster like the McWhannell display, but very focussed and a third again smaller in number of works: thirty-three items in six rooms. It also has an excellent catalogue, and was selected and expertly hung by Ben Abdale-Weir.

Ross’s exhibition, like McWhannell ‘s, is a survey - but one that is tightly organised - consisting basically of two bodies of relief painting that pivotally revolve around one work - Red Interior (b), 1994, in the landing. With its tilted trapezoid plywood shape - positioned in front of an irregular cross bearing multiply widthed arms - it links both series: an large-scaled earlier one of organic body parts, anamorphic skulls, elongated moons and shimmering water motifs; and a smaller-sized later series of glass panels held by screws in front of kitelike, composite quadrilateral forms.

As if the older series of multi-panelled works aren’t interesting enough with their references to Holbein and Munch and the emotional resonances of figural distortion, the newer floating toughened glass panels (square and circular) and underlying austere geometry also surprise.

On the Pah Homestead walls the diamond forms undermine the dominant perpendicular and horizontal vectors of conventional gallery (or domestic) architecture, for the plywood kite-forms beneath the transparency allude to composite fragmentation and squares flipped on their backs to present perspectival foreshortening. The cast shadows of the glass edges and the accompanying evanescent planar reflections (and teasing interplay with quadrilateral corners, and the modulated thin paint and ruled pencil lines on the plywood panel surfaces) block the possibility of the works being illusionistic ‘windows’ to be looked through.

These later relief-paintings may be constructed to pull the rug out from under the modernist white cube, but in the Pah, the space is difficult enough by itself - with its various windows and items of furniture, the occasional Kregar sculpture up in the ceiling, light switches perilously close to the lower edges of paintings, and ridiculous freestanding panels explaining ‘before’ and ‘after’ modifications to the Homestead - before the planned exhibition actually arrives. Because it is so exciting to see thirty-five Ross works brought together and grouped with aplomb, you try and ignore the irritating distractions.

Ben Abdale-Weir has carefully controlled the linked spaces, positioning Ross’s works wisely so that groups cohere and intensify via their common physical preoccupations, and connect with related developments around the next corner. In some ways the whole show is about certain methods of line or edge combination consistently explored by Ross, such as butting carefully cut panels together that are highlighted by contrasting textures of sanded or brushed-on paint, manipulating shadow so lines cross panels and supporting wall, manipulating thin over-painting so submerged forms peek through, joining elongated tapered batons onto panels with cut-out sections, strategically butting curved or cornered forms against straight edges.

Personally I think I prefer the earlier elongated works, due to the inventiveness of Ross’s organic forms and methods of assembly: the gruntiness of his scale, the drama of his tonal range and the boldness of his agitated surfaces. The later more-monochromatic geometrical works are comparatively dry and austere for my taste, though there is plenty of fabulously nuanced paint manipulation there if you look hard for it - under the glass - while the crispness of the shadow-casting, sharp clear edges, and worked-on pellucid surfaces, is pretty absorbing. This selective survey is obviously an important show for lovers of inventive abstraction, one that is rich in its varied evocations. Superbly methodical, it generously repays the attention of any keen-eyed - attentive - visitor.