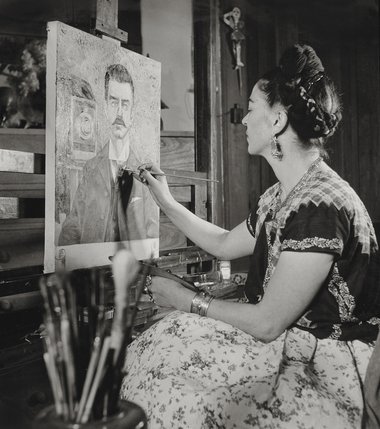 The exhibition is distinguished by exceptional design, providing an unassuming but very effective and internally-consistent framework which divides the 241 images into six sections: each is colour-coded, each features one or two of the images reproduced larger size, and each is surmounted by a relevant and illuminating quotation sourced from Kahlo herself, associates or other commentators. A seventh element is provided by a 27-minute film, 'Frida Kahlo; Wounded Nature: living memory of certain days.'

In the 1970s the remarkable Mexican artist Frida Kahlo emerged as something of a feminist hero - indeed, almost as some kind of martyr, not only because of her wretched physical condition as the result of a bus crash when she was 18, but she was also seen to have suffered for much of her painful life in the shadow of her husband, the larger-than-life Diego Rivera. On their wedding day in 1929 they were likened to an elephant and a dove.

Over the past four decades her admirers and enthusiasts have elevated Kahlo to cult status, and it’s not easy now to disentangle her work from both her biographical details and her fans’ semi-worship. As well, because her work is so deeply embedded in Mexican nationalism and the Russian-style socialist beliefs prevailing among progressives at the time, further difficulty occurs in getting a fix on just how and why the name Frida Kahlo should continue to shine so brightly.

This excellent, comprehensive and rather sober show, so expertly curated and brilliantly installed, offers a calm and level base from which to begin sorting the wheat from the chaff.

The simple “her photos” of the sub-title says it all. During her life she accumulated what can only be called a hoard of about 6,500 photographs almost as if one compiled a diary: random jottings - in this case visual ones - documenting daily events, friendships and lovers, and - because she was an artist - images possibly useful for later work. Kahlo as a sentient human being and highly-alert artist was a magnet for all this stuff. Some of the images were made by her but most of them weren’t, but the point here is that in the very act of acquisition she made them hers. They exist as a panoramic self-portrait, and that is their primary value and what makes this exhibition of 241 of them so compelling and rewarding of sustained viewing.

After her death in 1954, Diego Rivera sealed these images from her personal and historical collection in the Mexico City house, Casa Azul - the Blue House - they had shared, and the photographs have remained there until recently when noted Mexican photographer and historian Pablo Ortiz Monestario initiated the process of their unearthing, cataloguing and reproducing for international exposure. Yes, they are reproductions - which is, after all, in the nature of photography - but the quality is such that only an expert could see the difference. It’s not likely, though, that the majority of those seeing the show, and for whom it is for, are going to have many quibbles on that score. They’re drawn instead by the fact that, as the curator writes, “she understood the power of the medium.”

Kahlo and Rivera had many Mexican and American friends, plus a continuing stream of international visitors - among them many artists and political activists such as Andre Breton and Leon Trotsky - so the Casa Azul was a hub of ferment and stimulation. Frida’s collection includes images - some of her, some used in her work - by Man Ray, Nickolas Muray, Gisele Freund, Martin Munkacsi, Tina Modotti, Lola Alvarez Bravo, Edward Weston, Ansel Adams and Charles Sheeler - all adding to the richness, range and texture of this exhibition. Apart from one small pair of images by Florence Arquin c1938 all the images are black and white, and many of them quite small - some smaller than passport images - but it’s a big show in terms of numbers and its range. Its subject too, although small herself and extremely fragile physically she was a big personality whose works and life have had big impact the world over.

The exhibition is distinguished by exceptional design, providing an unassuming but very effective and internally-consistent framework which divides the 241 images into six sections: each is colour-coded, each features one or two of the images reproduced larger size, and each is surmounted by a relevant and illuminating quotation sourced from Kahlo herself, associates or other commentators. A seventh element is provided by a 27-minute film Frida Kahlo; Wounded Nature: living memory of certain days. Although made in 2001 it feels older, consisting mostly of historic footage of interviews with her contemporaries, including Manuel Alvarez Bravo, perhaps Mexico’s most well-known photographer. While the film’s a useful component it’s slightly hagiographic, the only dissenting voice coming from Rivera’s daughter - her father was stolen from her mother by Kahlo, after all - yet it’s a measured dissent delivered with almost aristocratic tact within an interior displaying all the palaver of modern Mexican baroque. It’s a remarkable performance.

Kahlo’s origins were diverse, and the first section, Origins, pays tribute to this complexity: her mother, Matilde Guillerm, was of mixed Indian and Creole descent while her father, Guillermo Kahlo was a German-Mexican photographer who clearly was a major influence on her life, as were her maternal grandparents, all of whom have portraits here. The other five sections follow seamlessly in a clockwise direction- The Casa Azul; Politics, Revolutions and Diego; Her Broken Body; Frida’s Loves; Photography - with the film in an open booth at the centre.

The two biggest events in Kahlo’s life and which had the biggest impacts on her physically and artistically are amply represented in this exhibition. The severe injuries Frida suffered as a very young woman of 18 in the 1925 bus crash plagued her for the rest of her life, including 32 separate operations, some of which made her condition worse. (She endured other adversities, such as being one of 35 women attending an art school with 2000 students.) Some of the most affecting images of the show are by Nickolas Muray depicting her in various forms of physical traction. These are in the section Her Broken Body, and also there are five photographs of groups where Frida’s own image has been cut out, further emphasising the brokenness which centrally characterised her valiant attempts at living a life.

She once wrote: “I have suffered two serious accidents in my life, one in which a streetcar ran over me … the other accident is Diego.” Rivera loomed large - literally - in Frida’s life and looms large in this exhibition. The elephant was always in the room. He was one of the most famous artists of his time: never short of commissions, a social and artistic titan, travelling widely, feted everywhere. His crippled wife stayed mostly at home, carried anywhere on a litter by four men. Somehow, endlessly in pain, she did a lot of work and filed a lot of photographs.

At the beginning of the 21st century Diego’s extensive murals for a socialist and nationalist Mexico remain significant, but only an interesting achievement now. Much of his other work seems dated and formulaic. Kahlo’s sometimes clunky, always quirkily personal imagery becomes steadily and more strangely compelling as time passes, lifting off from the immediate concerns of its time and place of making. A dove ascending.

Note:
The entry fees of $15 for adults, $10 concession and $5 for secondary students cover a modest but very informative 6-page fold-out catalogue.