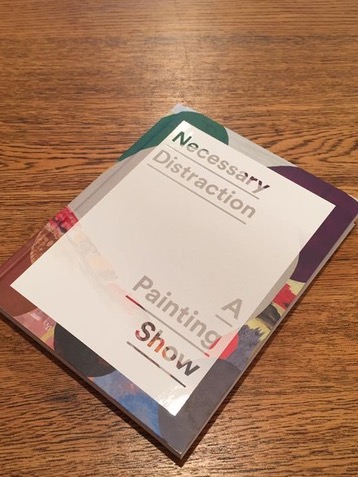 Necessary Distraction makes big claims about current New Zealand painting and, by implication, even bigger claims about its own curatorial place. Painting's current drive to throw off the burden of its own history does not entail ‘a departure but a productive engagement with things and beings made in this world' (31), Conland suggests. Perhaps this does say much about the quiet radicality of painting's present incarnation, but it says little about the state of current curatorial practice per se.

The most notable achievement of Necessary Distraction: A Painting Show does not lie in the paintings per se but in the way in which the curatorial agenda of the exhibition has been theoretically thought through to a level of abstract resolve. This is more interesting and more important than the work the exhibition presents. The curatorial narrative goes that there is disquiet in contemporary New Zealand painting, exacerbated by its current historical milieux, and this has fomented a radical revaluation of painting’s self image.

In her short essay An Anxious Medium (pp. 39-40)) Zara Stanhope links painting’s anxious self-image to the prevalence in art of ‘digital media and the internet.’ Alan Smith’s neo-Marxist take in his essay Little by Little, Soon a Rich Cloth: Painting Everywhere and Everytime (pp.33-37) observes a disquiet between painting’s traditional materiality, which has acted as a historical “prosthetic support for subjectivity,” and painting’s exaggerated commodity value. However, the most interesting upside of the show is that curator Natasha Conland’s curatorial decisions display an unexpected bravery and how this in no small way ratifies her curatorial agenda.

Although there have been anecdotal attempts to link the painting-specific exhibition Necessary Distraction: A Painting Show and the larger, unwieldy Freedom Farmers: New Zealand Artists Growing Ideas (Auckland Art Gallery Toi 0 Tāmaki, 26 October 2013 - 14 May, 2014), these theses have been intellectually limp and unconvincing. Perhaps some causal argument can be made that transitively links the two shows, but it will be inevitably burdened by the whacky undisciplined curatorial agenda that hindered Freedom Farmers with its mood of professional entitlement and errant curatorial conceit. Both attributes are refreshingly absent from Necessary Distraction.

I am not about to lay out a detailed argument as to how the two shows differ but rather laud Natasha Conland’s brave curatorial attempt with Necessary Distraction to intellectually couple current New Zealand painting to a deeper, more timely problematic: painting’s pathological relationship with contemporaneity. This is convincing laid out in Conland’s curatorial essay If I would … a necessary distraction, included here (pp. 29 - 31).

Despite the prevalence of unexpanded catchphrases and its sometimes splintered logic, a persistent reading of Conland’s essay evinces a considered ontology that engages painting’s problematic in a surprisingly worthy and convincing way. The curatorial agenda of the exhibition demonstrates a willingness to test and disrupt the expectations of canonical art histories and museum display customs with a bold unconventional exhibition design. The publication’s lush visual imagery illustrates this well. The exhibition design involves daringly unfinished exhibition surfaces that instantiates what Conland sees as the ‘unhinged’ condition of contemporary painting and the way this may engage an audience.

What is refreshingly new is that Necessary Distraction is willing to reprise the metaphysical speculations once made anathema by poststructuralist theory, and to somehow subjectivise the increasingly disquieted space between viewer, history and painted surface. A condition, she contends, that has recently emerged in New Zealand painting. If painting is to restate its relevance, then the subjective space between painting and a viewing audience, whose visual vocabularies have been increasingly flooded by digital imagery, now ‘requires a contract of being in the present between maker and viewer’ (29). Evoking a recently fashionable strain of Parisian ontology, Conland’s argument aims at a deeper truth: current painting practice necessitates a need to repossess the ancient power of painting’s materiality, and sidestep the legacy of its own long history. For painting to ‘un-hinge its beings‘ requires a ‘being-there’ that is firmly located in ‘its present tense’. (29)

If the relationship of viewer to painted image is to in any way incite a significant turn, so that ‘we might be with painting,’ then the relationship between viewer and surface must at least entail some way of making the ‘being’ part of ‘being-there’ cross over the prescriptive expectations of canonical art histories; i.e. painting’s new desire to be seen or felt in its born-again glory, must be done so with its historical subjectivity still intact. But it takes a lot to give this sort of speculative thinking curatorial guts and Conland works her way through the issues well, even though she asks more questions than she seems to answer.

The curatorial drive of Necessary Distraction seeds at a point where ‘we begin to see a group of artists creating paint surfaces which thrive on irresolution and uncertainty’ (30). This statement binds the ontology of painting to an artist’s subjectivity in ways that are increasingly being determined by painting’s sensitive underbelly: contemporary painting’s uneasy relationship with its own history.

To characterise this, Conland forms an ontology of time and space that gives theoretical weight to painting’s new ideological body. Again, her play with grammatical tenses underscores how painting’s newly recognisable cultural face is indeed temporally charged. Painting’s obsession with present time is hastened by its anxious relationship with the art-historical idea of contemporaneity. This has imbued New Zealand’s current stock of painters with a willingness to engage ‘irresolution and uncertainty’ (31) and foment a ‘contemporary hunger’ for painting to ‘re-engage with the detailed material intelligence of another time … to un-hinge its beings …’ (29) as she puts it. Furthermore, painting’s being-there in present time, she then states, can only be spoken as a conditional: ‘If I would …” from the title of her essay.

The curatorial determination of Necessary Distraction impugns the postmodern and poststructuralist anti-metaphysical speculations that, for the past twenty to thirty years, have handicapped the historiography of painting and diminished its importance as a percipient cultural force. But sometimes her tenses get mixed up and betray the sort of chronic theoretical flaws that are often encountered when evocative art-critical catch-phrase stylings are loosely used as philosophical speculations: any ontology of time and space that is capable of supporting the irresolution and uncertainty of a radically new time - Conland is evoking painting’s quiet revolution - must include itself in its own range. When it comes to explaining the singular occurrences that enable a radically new way of doing things - some people call them events - structural inconsistency will always wreck your thinking.

The grammatical tenses that bear much of the narratological weight of Necessary Distraction, deny the very thing they seek to confirm: painting’s born-again contemporaneity. Conland: “Their [the painters in the show] painterly action appears to to be something like the present real conditional. ‘If I would‘ - pointing to a future and its possibilities.” (31). Grammatically speaking however, ‘If I would‘ is a present unreal conditional, not a real one, as Conland suggests (cf. 31) (the auxiliary verb deems it so). The auxiliary verb would points to something which is possible but not (yet) real. This unwittingly injects a mood of hesitancy into painting’s imaginary present exactly at the point where it should be forceful and direct: where contemporary painting reasserts and then plays up the idea of its own contemporaneity.

It is a mistake to insist that painting should reprise the radical role it once held in the historical avant-garde; but nor does Necessary Distraction suggest it should. Nevertheless, Necessary Distraction makes big claims about current New Zealand painting and, by implication, even bigger claims about its own curatorial place. Painting’s current drive to throw off the burden of its own history does not entail ‘a departure but a productive engagement with things and beings made in this world’ (31), she suggests. Perhaps this says much about the quiet radicality of painting’s present incarnation, but it says little about the state of current curatorial practice. Despite the bold curatorial intention of Necessary Distraction, there is a general audience-sensitive institutional powerlessness, which in New Zealand curatorial practice is exacerbated by a general inability or unwillingness to stir strong abstract thinking into the curatorial mix.

This condition was underscored by the scant intellectual attention paid to the problematic of painting’s contemporaneity, which was offered up in the panel discussion of invited professionals that marked the close of the exhibition; even though this was meant to be the principle point under discussion. Despite some commendable attempts to directly address the point at issue by at least two members of the group, it was clear that the easy way of engaging difficult theoretical issues in front of a populist audience is to veil dilatory intellection with an upbeat illustrated talk. When it comes to discussing art-theoretical issues, it is disappointing when curators co-opt the pervasive form of the artist’s talk - “this is who I am, this is what I do and this is what I have done” - and then loosely and tenuously connect it to the sort of complex, intellectually demanding abstractions that the tough issues warrant.

Unless there is some singular occurrence whereby current curatorial practice universally deconstructs itself and is then able to find some radically new way of presenting art to ‘this world’ - i.e. foment actual curatorial events - then all we can expect to see is further predictable and historically manipulative (eg. Julian Dashper and Friends) iterations of the same-old curatorial business-as-usual. Despite this, the decision making that went into Necessary Distraction has, in its own localised way, momentarily punctuated the institutional flatness that currently regulates the way we see art. This is no mean feat.

Difficult to spin the concept “being-there” (aka Dasein) in any other than a Heideggerian manner. Thus, the “being-there” of painting ...

Difficult to spin the concept “being-there” (aka Dasein) in any other than a Heideggerian manner. Thus, the “being-there” of painting is all about existence, presence, consignment; all about assuming the “there” or the having-to-be-there (inside the institution) of painting. Heidegger called this “thrown-ness”, which is a “being-towards”, a project or a task. In this sense, the being-there of painting is regarded as some kinda mission, an historical vocation, a required transformation of painting as already-given into. . . What? Distraction, obviously. But in order for painting to necessarily distract it withdraws itself, it hesitates, refuses, and it is precisely this veiled refusal that enchants its being-there, that is to say, enchants the viewer-painting nexus via the ex-static and obscure mood/set-up of an institutionalised “If I would . . .”

If I would . . . What? Clearly Conland’s curatorial task is a “If I would. . . Reveal, unveil, give presence to painting’s very withdrawal or hesitancy.”

I, however, prefer “If I would . . . Whatever.” Consequently, painting’s being-there, its thrown-ness, historical vocation or project, that is to say, its ongoing captivation-as-disclosure by curators and exhibition designers inside their quasi-mystical institutions would be rendered inoperative, transformed via a “I would prefer not to” into painting’s whatever-being (Agamben). Only then would painting maintain its withdrawn-ness, its undisclosed-ness, its pure potentiality. 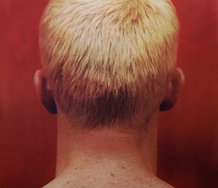 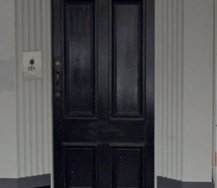 What Went Down at Mercy Pictures. 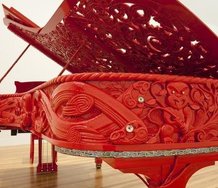 Hineraukatauri and that Red Piano. 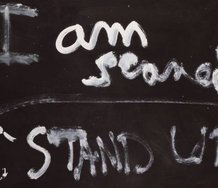 Sold on Fragility: Mercy Pictures & the Martyrdom of Colin McCahon