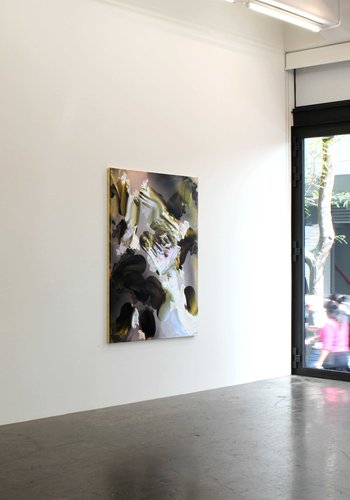 Using printing techniques and a scanner Hemer creates backgrounds by scanning (with the lid open) skies behind painted sculpture forms, mixing the effects of sunlight from above and LED light from below. He then paints on the resulting printed canvas (after masking) with spray, acrylic, impasto and oil, creating the two types - one where he emphasises of separation of the two spatial layers, the other where they slide back and forth intersecting each other.

Currently based now in Vienna, New Zealand artist Andre Hemer seems to be building a successful reputation for himself in the northern hemisphere with shows and publications. With a long history of interest in digital processes and web communication that he exploratively blends with post-war painting technology, he presents in this his first Gow Langsford show two sorts of painting: Big Node and New Representation.

The former are characterised by impastoed stuccolike surfaces surrounding thick tubular (wormlike) bands with rounded tips where digital imagery peeks through; the latter by more spatially complex compositions where the figure /ground interaction is more complex and confusing. If you like modernist painting like I do, that means better. The picture plane is more integrated and modulated - mainly flat with the occasional projecting blob - without obvious illusory ‘holes’.

So one sort (New Representation) I really go for. The other (Big Node) I find too layered and screenlike. Too visually simple. How both sets are made is pretty interesting.

Hemer believes that the presence of the internet is such a powerful influence on the human visual experience that “we are caught between versions of things and are relearning to navigate a world in which the physical act of a one-to -one viewing is diminished. A contemporary world shaped by networked forms has led to new phenomenological experiences.”

While it is obviously true there are many ‘translated’ versions of things (ranging from electronics, literature, the printed image), the physical act of one-to-one viewing it seems to me is still dominant, and not about to disappear. Even though the degree of digital visual mediation is huge. If however he was to claim our listening to the world is diminished I think I’d almost agree. (Even suburban starlings now mimic electronic sounds). With seeing though, we still mostly encounter the world, of which digital processes are a large part, directly - even though there are also traditional epistemological issues to do with our senses and the data correlations beyond our bodies.

Using printing techniques and a scanner Hemer creates backgrounds by scanning (with the lid open) skies behind painted sculpture forms, mixing the effects of sunlight from above and LED light from below. He then paints on the resulting printed canvas (after masking) with spray, acrylic, impasto and oil, creating the two types - one where he emphasises the separation of the two spatial layers, the other where they slide back and forth intersecting each other.

The fascinating thing is that Hemer‘s work fits into the Gow Langsford brand well. Some of it even seems influenced by the kitschy colour sensibility of Max Gimblett; especially with the impasto paints that have a metallic sheen. We can also see an interest in brushmarks (vaguely related to Judy Millar), and in the runny gaps between swathes of colour, a hint of Dale Frank viscosity.

This is a really interesting exhibition, but despite Hemer‘s claims, the best works are great in a traditional sense - you enjoy them via their interlocking parts the way you would enjoy a de Kooning. He is not as radical as say a Bernard Frize with his community manuality and planned process. Damn exciting work nonetheless.