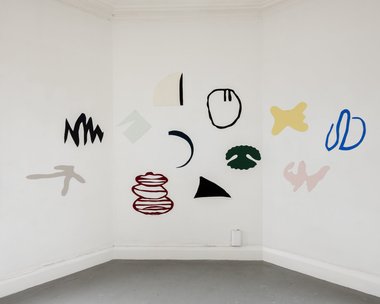 One is struck by the wit of Killeen's formal invention, the timeliness of these works for the current era, his delight at his own permutations of hybridity, his graphic explorations prodding the linguistic limits of classification, the inadequacies of naming (when taxonomic borders are blurred) and the experiential power of the (solo or collective) image.

The three works here (two ‘democratic’ cut-outs in two galleries, and an ‘authorial’ painting on paper - in the office in between) are a good reminder of just how interesting Richard Killeen can be when he is really stoking. There are thirteen years between the cut-outs and they are very different, even though both utilise painted aluminium components floating in isolation on a snow white ‘sea.’

The framed paper work is the earliest of the three works (1980), Seeds across the Land, being the title, the red square referencing a square block of terrain, and the black whale tail or diving bird shape also being a sycamore seed. Morphological ambiguity here is calculated, and the title seems to refer to ideational dissemination.

With Black White #1 (1981), presented on three obliquely tilted walls, the mood is that of plants, rocks and blobby creatures that inhabit the sea; various linear and solid morphologies that feature flattened abstraction. Undulating contours and angular rhythms dominate as Killeen’s precisely cut (but hard to identify) silhouettes tremulously hover in front of Anthony’s white architectural planes.

Still Life (1994) one has double the number of pieces of the other earlier cut-out, and some of these have collaged computer images set inside simpler forms like squares or circles. These units are starting to head towards being self-contained (but painted) ‘cut-outs’ in themselves.

It is a more complicated work, not only because it has double the number of suspended elements on show, and a more complex spatial organisation within some of those, but because it is far wider in the thematic range of its taxonomies, which often overlap and blur. The pieces are like pages in a book, or microfiche leaves, presenting intermingled motifs (that often have symbolic meanings such as viewer consumption, perception, or interpretation) as a strangely jumbled list.

Oval spectacle lenses (referencing James Joyce, perhaps?) are juxtaposed with eyes, scissors, forceps and magnifying glasses; knives, forks and spoons transmute into tadpoles or balloons with streamers; cups, tumblers and vases compete with spherical bottles; keys with coats, rings and Mickey Mouse. Most of these items have thinly painted backgrounds that sometimes swell out tonally.

One is struck by the wit of Killeen’s formal invention, the timeliness of these works for the current era, and his delight at his own permutations of hybridity. We see his graphic explorations prodding the linguistic limits of classification, the inadequacies of naming (especially when taxonomic borders are blurred) and the experiential power of the (solo or collective) image.