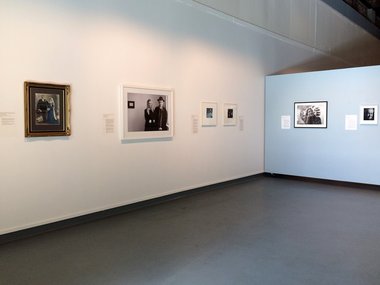 Most of the ten photographic images display the long-lasting conventions of formal portraiture, but the photographic medium has across the board, over the past century, brought an informality to portraiture that seems hardly to have registered at the NZPG. The notion of a portrait gallery can so easily come over as stilted and even irrelevant when its contents display so readily the awkward and increasingly inapt conventions of formal portraiture.

Since its inception in the 1990s the New Zealand Portrait Gallery has sometimes been hard to fathom. Both its exhibitions and its acquisitions in general have failed to give a clear idea of what the institution is about (1). Apart, that is, from the very basic premise of acquiring and presenting physical likenesses of New Zealanders who are seen to have made their mark in various endeavours, historically and in the present. Implementing such a project is, of course, fraught with a wide range of assumptions and value judgements, to say nothing about the complex relationship between likeness and ‘character’. Put another way, it’s the relationship between passport photos and the higher aspirations of art. What’s being portrayed in that kind of choice has little to do with what the subject looks like: it’s more a portrait of the expectations surrounding the whole subject of portraiture.

The NZPG’s earlier and sister institutions elsewhere began with a predictable focus on ‘the great and good’, a sort of visual Who’s Who, privileging men, political and upper-society movers and shakers, and those of paler complexion. In the latter part of the 20th century this rather narrow representation became unsustainable, a move mirrored by this country’s own Dictionary of National Biography (2), where the range of inclusions was expanded to include more women, Maori and those from the social margins, all of whom made a mark of course, but not always in fields formerly socially acceptable. The Dictionary’s website offers a partial list of categories clearly indicating its range: Carvers, Criminals, Inventors, Nurses, Prime Ministers, Prophets, Sports people, Translators, Whalers and Writers.

The NZPG’s exhibition programme consists of shows from its own collection, commissioned shows (such as curator Peter Simpson’s recent excellent Leo Bensemann & Friends: portraiture and The Group, and the current, slightly contentious (3) show of 34 Wayne Youle portraits curated by Helen Kedgley) and exhibitions in gallery spaces hired out as fund-raising opportunities - subject to their meeting the institution’s standards. The commissioned shows give the programme depth, and the hired-in exhibitions give it a contemporary freshness, so generally it’s a good mix and something of a triumph given that the NZPG’s operational budget appears to be along shoe-string lines.

Shows drawn from the - albeit growing - collection, however, tend to be disturbingly uneven. This goes back to the apparent lack of clarity around their collection policies, the default setting seeming to be a rather crude notion of physical likeness in a realist sense. It makes you wonder if, say, an image such as Picasso’s 1905/6 portrait of Gertrude Stein would ever make it into the NZPG collection, or even Terry Stringer’s 1977 small bronze ‘cubist’ take on Katherine Mansfield.

There are two additional problems. Firstly, the NZPG relies heavily on donations which can be a minefield of social and political complications outside of any consideration of quality and artistic worth. Six of Capture‘s ten photographs have been gifted by their respective artists and two more by donors. Secondly, in a small uncritical culture such as this, where much artistic endeavour is amateur (and almost valued for being so) and its products unskilled, institutions such as the NZPG so dependent on public goodwill can so easily acquire works where some well-intentioned and perhaps well-connected person having a crack at realism is all too readily apparent (4).

In a curious way, the media involved in traditional portrait gallery representation paralleled the old social hierarchy at the heart of their collections: oil on canvases at the top, then through watercolour on paper to scraps of drawings, caricatures and cartoons at the bottom. And, until recently, photographs were out of sight altogether - the sort of people attracted to the notion of portrait galleries more likely to be resistant to considering mere photographs as worthy of inclusion. No art involved, you see.

A classic case of this enduring attitude was the commission a few years ago for a portrait of the Queen of New Zealand, Elizabeth II. This life-size, full-length oil on canvas by Nick Cuthell (2013/14) echoes the 18th century tradition of portraiture in its formality and execution but without - it must be said - emulating or adding to it. Apart from the constitutional aspect, the only connection this portrait has to New Zealand is that it was paid for by New Zealand dollars. In photographic archives throughout this country there are many more potent, relevant and more successful images of HM, mostly from the Royal Tour of 1953/54. One, by a Timaru Herald photographer, is now in the South Canterbury Museum, easily accessed on their website through catalogue number 1503. Its formal complexity carries a range of historical and social resonances entirely absent in the commissioned portrait.

But, all the same, that formerly widespread conservative view of photography has been changing, and this modest exhibition of ten photographic images from the collection is the first such show at the NZPG and deserves some acknowledgement. Apart from a fine 1905 hand-painted opaltype of a wedding couple, all the other images are contemporary, and apart from the portrait of a nun, all the others portray figures in the arts sector: painters, writers, actors and dealers. If this small show is consciously dove-tailing with the adjacent Youle parade of ‘creative figures in the arts’ it’s possible to overlook its somewhat narrow focus, but if it isn’t, it reveals a privileging, reverential and rather out-dated attitude regarding the ‘specialness’ of artists across the spectrum. If society’s high esteem for these people was matched by the income they receive for their risk-taking and dedication there might be some point to the adulation. Otherwise it’s warm fuzzies doing a fine impression of a free lunch.

New Zealand’s social texture is much richer and more interesting than this selection suggests (5), and while the powers-that-be at the NZPG may draw a line above the inclusion of, say, Ron Jorgensen and George Wilder, there are plenty of nurses, inventors, sportspeople or whalers (harking back to the Dictionary list) whose achievement and extant images could well qualify their collection and exhibition.

Most of the ten photographic images display the long-lasting conventions of formal portraiture (the examination of which could form an interesting sub-text to the extended labels of future exhibitions) but the photographic medium has across the board, over the past century, brought an informality to portraiture that seems hardly to have registered at the NZPG. The notion of a portrait gallery can so easily come over as stilted and even irrelevant when its contents display so readily the awkward and increasingly redundant conventions of formal portraiture. Collecting photography might offer the opportunity to infuse such a collection with fresher and more adventurous imagery, but what has been acquired so far tends to register as either extremely conventional or borderline corny.

Of the ten works in Capture only three escape these confines: Gordon H Brown’s portrait of Colin McCahon (as much a portrait of the home-spun jersey as the home-spun and camera-shy painter), Alan Knowles’ of writer Catherine Chidgey and Russell Kleyn’s of painter Irene Ferguson. The NZPG may be striving to address a general audience with its labelling, but it’s questionable whether statements such as the following open up many avenues of understanding for the visiting public. The exhibition’s introductory label begins with ‘A photograph captures a split second in time and records it for history’, while the label for the Ferguson portrait states: ‘Kleyn’s portraiture is anchored by a strong use of light and awareness of surroundings,’ an observation that is an easy fit for perhaps seventy per cent of photographic portraiture generally. The distinctive and distinguishing feature of this image is the positioning of the subject, an aspect which goes unremarked. The photograph echoes Karsh’s then radical 1954 portrayal of cellist Pablo Casals, depicting him from the rear and relying on the light falling on his signature bald pate and faithful instrument to carry the full and convincing weight of the portrait.

While it’s encouraging to see the NZPG’s profiling of a medium earlier so disparaged, the actual imagery is remarkably undistinguished and suggests selection has been made largely around considerations of likeness and availability. This highlights the dangers of being in a position of dependency on donations. The credibility of the NZPG as a national institution depends on these issues being examined: rigorously, intelligently, and soon.

(1) One of the many drawbacks of the corporate model - such as Te Papa - is that what any institution comes primarily to be about is the institution itself, and only secondarily in pursuit of whatever ‘vision’ it may claim to have. Another instance could be the recently-retired Child, Youth & Family agency of the Ministry of Social Development: in its 30-year history it went through 14 re-structures. Expecting this most challenged government department to keep its eye on the ball in such navel-gazing circumstances would be like expecting a person with multiple serious health issues to be focused on working for world peace.

(2) A government-sponsored 1990 Sesquicentennial project, this began with volumes published in hard copy and latterly online, but limited to subjects no longer alive.

(3) The show, described on the NZPG’s website as ‘New Zealand’s best known figures in the creative arts’ is called Strangely Familiar, and the familiarity derives from the fact that, formally, all the works have been sourced directly from images made by other artists and photographers, none of whom is acknowledged either on the individual labels or in the gallery’s hand-out backgrounding the images. Appropriation is one thing: piracy is another - and for an artist who has often assumed the moral high-ground in the matter of appropriation this omission seems a very curious lapse. This case parallels exactly the current dispute between photographer Lynn Goldsmith and the Warhol Foundation over the use by the artist of her 1981 portrait of Prince. The NZPG positions itself as a national and professional institution so needs to be more vigilant in countenancing claims of authorship which are so fundamentally misleading.

(4) A controversial case of this (mercifully offshore) is the recently unveiled bust of Cristiano Ronaldo at the airport named after him in the Madeira Islands. It follows another full-length sculpture of the football star outside the museum (also named after him) in Funchal, also equally risible. Mercilessly onshore is a similar life-sized image of Peter Snell in the main street of his birthplace Opunake - worth detouring to take a look on your next visit to the Len Lye Center.

(5) To be fair, the ten images in this show represent seven woman, five men and one Maori, which equates roughly to the demographic.