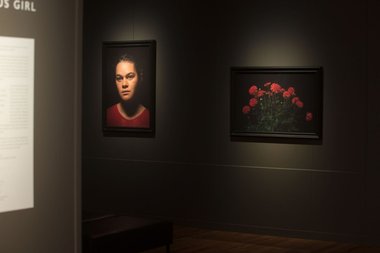 Despite the absence of context and continuity, the operatic impression was reinforced by the show's installation: the small gallery's already-dark grey walls intensified by the very low lighting level, with each of the eight images dimly spot-lit theatrically. The image on the end wall even suggests the stage's curtains had just parted, revealing a backdrop of beach and ocean from a high vantage point, the action about to begin.

Whanganui’s Tylee Cottage Residency programme - beginning with Laurence Aberhart in 1986 - is this county’s longest-running such opportunity. Each year two to five artists in succession and working in various mediums occupy the historic cottage near the centre of town for their preferred period, and then at least begin a specific project. When the project has been completed - they can take a couple of months or even years - the Sarjeant Gallery presents an exhibition. Given the Gallery’s rich photographic collection and the town’s intimate history with photography, many Tylee residents chosen have been photographers. Some, like Anne Noble and Andrew Ross, have added significantly to the documentary store and the town’s sense of its own history.

Auckland’s Roberta Thornley held the Residency for five months in 2015, and has since settled in Whanganui. Known for her often unsettling portraiture and strange arrays of common objects portrayed in the dark, an intervening period in Rwanda seems to have changed her course a little. While there she felt a need to shuck off art and just take photos. Thornley found herself recording a lot of young people doing energetic things, as they do (1). Initially in Whanganui she seemed to have little secure sense of what form her project might take, but gradually came to settle on a subject that combined both her history of making portraits and her recent experience of youthful athleticism. A Serious Girl is the result (2).

Thornley uses a camera and is considered an artist, but her oeuvre reveals she’s something of a production manager too. Of course, nearly all photographic images have been staged (3) and even when not, photographers exercise control in a number of effecting ways: the angle they choose, what images they select as being worth reproducing, and how those reproductions look, their scale and tonalities. After Modernism, once photographers had permission to ‘fess up, staging has become a fine art, some of the more complex productions worthy of the Paris Opera (4).

Thornley’s approach to production has all the thoroughness of a seasoned impresario’s. Once any new project has reached a certain settled conceptual stage she arranges what she calls, frankly, a casting session. There must be some element of instinct involved in the choice because the project then develops collaboratively. In this instance a woman gymnast in her late teens was chosen, Thornley seeing something of a parallel between the demands of succeeding in sport and the commitment an artist must make to realise their art, both entailing a seriousness alluded to by the exhibition’s title. Shortly after this the gymnast suffered a disabling injury, so the project was forced to change gear, the stage shifting from a city gym to a house in the seaside suburb of Castlecliff, the sub-text from athletic prowess to coping with adversity, possibly a more challenging situation for a young person not involved in a team sport. As Oscar Wilde observed life imitates art, so the unforeseen injury introduced a note of operatic tragedy to the project and added a seriousness to the situation beyond that of a personally focused sporting commitment.

This whole back story constitutes a kind of libretto, and while this is important - and in the case of A Serious Girl, crucial - to understanding the context in which the exhibited images were made, ultimately it’s the quality and coherence of the music determining the success of any opera. While it appears that the project may have lasted for up to two years, there is no indication in the show’s labelling or within associated events (5) of the extent of the body of work the exhibition’s eight prints were drawn from. But, does this matter?

The documentary mode - perhaps the chief glory of the photographic medium - has many mansions these days, a situation complicated by many ‘artist photographers’ denying any connection with the tradition even when their projects tick all the known boxes (6). It’s a market reality that ‘documentary’ is a kind of code for ‘not art’ for most curators, dealers and collectors. Implicit in the documentary project is narrative, which is one of the main reasons for resistance to the admission of photography to art’s pantheon during Modernism’s hegemony: ‘telling a story’ is what those sentimental Victorians did. And implicit in narrative’s concept is continuity, a continuity made visible in the works’ exposition and not merely implied by the labelling or suggested in curatorial interviews. Few opera-goers would be satisfied by a performance having most of the pages missing from both libretto and score.

Despite these absences, the operatic impression was reinforced by the show’s installation: the small gallery’s already-dark grey walls intensified by the very low lighting level, with each of the eight images dimly spot-lit theatrically. The image on the end wall even suggests the stage’s curtains had just parted, revealing a backdrop of beach and ocean from a high vantage point, the action about to begin. Another image to the right of it is a larger-than-life-sized head and shoulders portrait of the gymnast/soprano, beads of sweat suggesting both physical effort and a denial of the idealisation of most formal portraiture. But, it turns out this is a theatrical effect too - the young woman’s glow the result of prolonged exposure to hot studio lights (7).

Artifice is the nature of art, but, while deploying its own distinctive range of artifice, photography’s gift is as a hedge against the merely artificial. It could be said that Thornley’s work ‘complicates’ this distinction, and if it did indeed raise and clarify the issues (the clarifying bit is usually left in the ‘too hard’ basket), then shows such as A Serious Girl would add to the debate and reveal further shades of photography’s meanings for more perceptive viewers. But rather than adding anything these works repeat what Kriselle Baker wrote of the photographer’s practice in her Art New Zealand piece seven years ago.

There are undoubtedly some arresting images in this show, but as dots they remain largely unjoined, even with the libretto’s exposition. Fetishised objects such as discarded gymnast’s socks and red flowers photographed at night seem meant to contain connecting symbolism but remain stranded in their own earnestness. Thornley’s young and talented enough to have a future. A Serious Girl might represent an overture - like Rossini’s Thieving Magpie - for which there is no opera; or it may be the overture to a Magic Flute yet to be written.

(1) Thornley herself had played hockey at a national level.

(3) In the past few decades even great exemplars of “the decisive moment” have been unmasked as having been set up. Brian Brake’s famous Monsoon girl being a case in point.

(5) On Saturday 3 June the Sarjeant staged an hour-long public conversation between the artist and the Gallery’s curator.

(6) This is a strategic rather than a philosophic stance, the savvier artists aware that too close an association with “documentary” might bruise their art profile and limit sales.