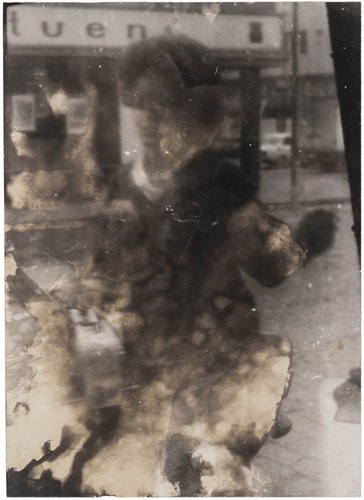 Partially from the restrictive conditions of the Communist regime Tichy gave up painting in the late 1950s, and a decade later, from his hometown in Kyjov in Moravia, he began to take photographs. There were three distinctive aspects to his practice: he used handmade cameras (sometimes constructed of cardboard), he used various methods of distressing the prints, and—more controversially—he photographed women in public clandestinely. The question this show raises is, was Tichy a great photographer or was he just a dirty old man?

What does a “good photograph” look like? Who knows? It’s probably an image meeting the aspirations of its maker but which also meets the expectations of its viewers at a given time. And that given time is itself shaped by the forces and quirks of history, the pressures of fashion and—more and more—the strategies of the market.

Lacking a secure critical language of its own—a result of its being such a relatively recent medium—photography has often been reduced to consideration of technical matters: what sort of camera did the photographer use, what was the shutter speed, were there any filters involved? This situation was bad enough in the analogue era, but since the advent of the digital revolution when both technical means and conceptual approaches began expanding exponentially it’s becomes almost impossible to pin down what photography is and what it might be about (1).

Needing definitions of any kind can often be a sign of unease with contemporary developments which, if they have any value, are always going to be challenging. There was never much of an issue around such basic questions when photography was largely outside of being widely accepted as art, but over recent decades when the medium’s been colonised by the art world and attempts at assimilation made by curators less alert than they might be the issue becomes not only alive but urgently so. The Pompidou’s question was indeed timely.

Photography’s original documenting function first strayed - rather self-consciously - into the domain of art by attempting to ape Victorian narrative painting with its tendency to sermonising. While most of the results can still make us cringe, this development did at least open up the possibility of personal expressiveness, which, in the case of an artist such as Julia Margaret Cameron, lifted her portraits well above the largely pedestrian documentation of most commercial studios.

This artistically-inspired expressiveness (with a reliance on soft-focus) lead to the international movement known as Pictorialism which reached its height around the turn of the 19th century into the 20th century, but has cast a long shadow in terms of amateur practice. The aspirations of Modernism in the early 20th century affected photography as much as any medium, and the fact it was newer gave it a progressive edge that raised its profile and lead to its greater acceptance as worthy of inclusion amongst the fine arts. The soft-focus was dismissed, subject-matter became urban and industrial, and the style came to be known as “straight photography”: unmanipulated and of the moment. “Trying to look like art” dropped away as the medium established its own credentials and began relying on the force of its own individual strengths. For much of Modernism’s history the term “Pictorial” meant “bad photographs”.

Modernism’s focus on the new was underpinned by an assumption that development was a vertical progression from one “good” state to a “better” one, but a characteristic of what followed on from Modernism was more catholic, horizontal, ranging back and forth across history. Take for instance the matter of black and white versus colour in photography. Under Modernism—from around 1920 to the early ‘70s—the only really respectable imagery was made in black and white, but since then, not only has colour become the ascendant, the colour practice of earlier photographers is being rediscovered, freshly assessed and included in historical accounts. Even the formerly derided Pictorialism is now being reassessed more dispassionately.

Artistic aspirations may be one thing, but public perceptions are another and tend to be much slower in adapting to contemporary developments. Despite the rug having been pulled out critically from under the medium’s assumed verisimilitude over the past thirty to forty years there remains a general belief in the believability of photographs. Not only that, but the credibility of such images largely depends on their being sharply-focused, having an even horizon line and being composed in a traditionally balanced fashion. The work of Ansell Adams, say, might fairly represent these expectations.

What to make of Tichy’s work, then, which looks like it’s been shovelled up off the floor of a long-abandoned studio? Born in Prague in 1926, Miroslav Tichy had conventional art school training as a painter at the Academy of Arts there between 1945 and 1948. Partially from the restrictive conditions of the Communist regime he gave up painting in the late 1950s, and a decade later, from his hometown in Kyjov in Moravia, he began to take photographs. There were three distinctive aspects to his practice: he used handmade cameras (sometimes constructed of cardboard), he used various methods of distressing the prints, and—more controversially—he photographed women in public clandestinely. The question this show raises is, was Tichy a great photographer or was he just a dirty old man?

Photographers look for subjects and viewers look at photographs, the mechanisms of human looking triggered by a range of needs: from the practical (to stop tripping over, for instance) to the interesting (light sparkling on water, say) to the desirable, and when this last-named category applies the spectre of voyeurism raises its necessarily ugly head, “complicating” as they say the often innocent act of looking. The 1980s and ‘90s were the great decades for riffing on voyeurism, but generating more heat in the forms of righteousness and political correctness than light. Little did these latter-day puritans foresee the tsunami of looking-as- desired the advent of the internet would allow. The high-minded sermons about “the gaze” became as redundant as John Donne’s sermons at St Paul’s. Like his hapless parishioners the citizens of the 21st century have listened politely then got on with their lives, leaving the academics congratulating each other in their less-than-ivory towers much the same as those 16th century divines did in their rectories and college rooms.

Notions of privacy alive in the 1980s and ‘90s, too, have largely been swept away by systems of surveillance proliferating since the so-called war on terror, to say nothing of the increasing battle technologists have in keeping ahead of the hackers. As with any contemporary developments there are losses to grieve over and advances to welcome—it depends on where you stand on any given spectrum—but sometimes a simple acceptance of what is can get you through the day, leaving you as sane at the end of it as you were at the beginning (2).

One of the fields where photography differs from more traditional fine arts is that it respects the rawest raw material and resists idealising it according to existing canons of beauty and taste. This aspect is something the assimilationists (perhaps wilfully) fail to understand. One of the values of Tichy‘s work is that it not only exhibits this rawness shamelessly but seems to revel in it. There is no “recollection in tranquillity” here—the images’ lack of focus may muddy the subjects visually but the photographer’s emotional state is communicated with force and directness. Our reception of this depends on the ageless choice of Hercules: between virtue and pleasure.

As with so much photography, the pleasure comes from recognising honesty rather than beauty, so the import of these images is not so much their revealing the comeliness of women as much as admitting the photographer’s humanity. Again, it may be hard to digest a link between such an elevated term as “humanity” with the behaviour of a peeping tom, but as with many moral dilemmas it’s impossible to resolve, but Tichy’s work raises the questions and it’s for us to examine them.

Ultimately, it’s Tichy’s secret honesty (3) that remains the most intriguing, along with his now unknowable reasons for distressing the images so resolutely. The mystery might provoke a Freudian field-day. Was the intentional damage some sort of expiation for his voyeurism? Perhaps a further distancing of what was already clearly unobtainable? A comment on the brevity and fragility of human existence? Who knows? But the images are surely unforgettable (4).

(1) An exhibition entitled What is photography? took place at the Centre Pompidou, Paris, 4 March - 1 June 2015.

(2) This is not a recommendation of moral inertia, however, otherwise Michael Joseph Savage’s dream ending with increasing numbers of people living in cars would be acceptable. Picking your fights is central to any notion of morality.

(3) This secrecy reinforced by his never reproducing an original image, never titling it, never cataloguing, exhibiting or selling any of his work.

(4) The show’s accompanied by a handsome 43-page, fully illustrated catalogue, with an essay by Serena Bentley.