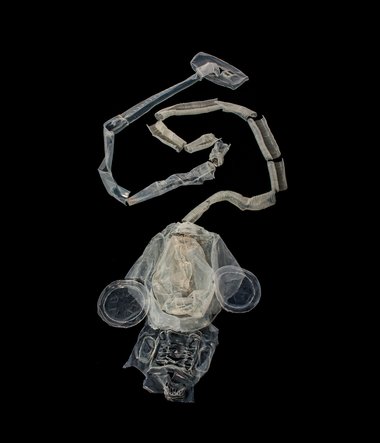 Now that Burrell's employing semi-transparent PVA-type glue for the layering, the residue aspect of his pieces more resemble the annual castings of insects and some reptiles whose former, transparent bodies are found still bound to the sites of their transformation. His earlier objects were memories of inanimate forms, these new pieces redolent of former lives, and it's that difference giving them new potency in his new Wellington exhibition.

Think “sculpture” and nine times out of ten the phrase “three dimensional” will pop up pretty much automatically, because that’s what “sculpture” has meant for a very long time: things made to be seen from multiple viewpoints and which, ideally, engage with the space they occupy.

The giants of Modernism—Henry Moore, Barbara Hepworth, Alexander Calder, David Smith, Anthony Caro and Richard Serra, amongst others—all conformed to these seemingly central defining aspects of the medium. But, late Modernist artists such as Eve Hesse and Louise Bourgeois, whose more conceptual approach and use of less permanent materials drew attention away from the physicality and centrality of the third dimension, began undermining the often macho, semi-heroic statements by the mainly male artists—an approach by many Feminist artists in the 1970s and ‘80s that was part of their strategy of difference.

Jacqueline Fraser’s work here in the 1980s and ‘90s—muka, string, wire and fabrics—took its lyrics from a similar songbook. Then artists such as Andy Goldsworthy, pulled the rug out entirely from under any sense of permanence or identifiable, constructed third dimension.

Now, it would take some confidence to propose a definition encompassing all aspects of sculpture. The loss of whatever security a definition may offer is more than compensated for by a richer and more challenging environment of “sculptural” practice.

Glenn Burrell began coming to notice in the early 2000s as a fearless experimenter with the traditional materials of art-making. His method was to cover very ordinary objects—from paper-clips to lawn mowers—with many layers of often different-coloured paint, then “skin” the objects, and, after repairing the cuts with more paint, lay the pieces directly on the floor, making affecting hymns to absence and exhaustion. The paper-clips were part of an entire office lay-out, the contents running to a desk, a chair, shelves, in-trays, and a telephone among a whole roll-call of commercial-space paraphernalia.

From May 2011 he scored a three-month residency at Whanganui’s Tylee Cottage, during which time he furthered his experiments with layers of paint tested beyond their endurance within the sports of cycling, skiing and sailing, extending his approach to objects such as bike tyres and handle-grips, skis and ski-poles, and tested the former on a remote road near Cape Palliser and the latter on the slopes of Mount Ruapehu—often with wonderfully destructive, brief and hilarious results (1). With him, the materiality of paint and concepts of sculpture took on new and exciting lives.

Since then this layering, stripping and reconstituting has taken a different turn. Earlier, the floor-based forms largely echoed the objects they derived from—a kind of secondary and highly artificial state. Now that he’s employing semi-transparent PVA-type glue (called Weldbond Universal Adhesive) for the layering, the residue aspect of his pieces more resemble the annual castings (2) of insects and some reptiles whose former, transparent bodies are found still bound to the sites of their transformation. Burrell’s earlier objects were memories of inanimate forms, these fresh pieces redolent of former lives, and it’s that difference giving them new potency in his new Wellington exhibition.

The show comes with a publication, a collection of loose sheets gathered within an appropriately see-through cellophane bag, including eighteen intriguing, quality photographs of details of the works, a list of the images’ titles, and a short essay by the artist, a piece having the rare virtues of being non-promotional, jargon-free and actually illuminating. One major part of the exhibition is a multi-piece assemblage illustrating/commemorating another office space—including, on the walls, the skins of clocks and framed academic certificates. In the essay he draws an analogy between the already analogous relationship between the insect and its exuviae and the office-worker and the office, the latter in terms of career development, personal redundancy and technological obsolescence—among other things.

In another walled-off corner of the gallery space—easy to overlook—lies the semi-transparent corpse of a small vacuum cleaner (figure 13 in the catalogue). Without the give-away cleaning head at the end of the machine’s rigid tube, the object could easily resemble one of those deeply sub-nautical sea creatures with huge eyes to compensate for the lack of light—and a complex, skull-like mouth designed to trawl for the smallest prey, the tadpole-like flexible tube a credible tail.

But no. The “eyes” are the collapsed wheels, the “body” the deflated vacuum bag, and the “mouth” the engine’s flattened innards. It’s a compelling image of complete exhaustion, and the very familiarity of the original but very common objects—such as office desks, clocks and vacuum cleaners—only heightens the shock of realising their vanitas potential as symbols of mortality. Once a machine for collecting dust itself becomes dust, what else is there? Remove that “d” and “t” and you have the answer.

Burrell’s mysterious and amazing membranes, spread helplessly on the floor and hanging disconsolately on walls, constitute a contemporary memento mori, a visible sigh of an over-burdened planet exhaling.

(2) The technical term is exuviae.