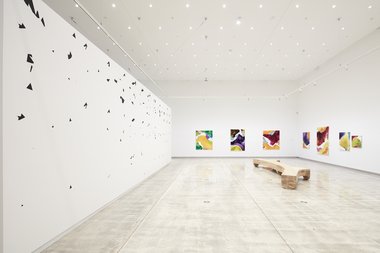 The counterpoint of the show is immediately apparent in the juxtaposition of new and recent paintings by three artists with very different practices. Rees describes these as practices which talk past each other as well as in conversation. In the wake of large scale contemporary painting exhibitions like Necessary Distraction, it is refreshing to see a show so confident in its minimalism.

Bathed in the cool blue light of dawn, I began this text while peeling across a thick white blanket of cloud on a flight from New Plymouth to Auckland. I recalled my first jumbo jet flight as a young child, captivated by the new phenomena visible from this elevated perspective. The skin of the clouds felt like a surface one could almost walk on. It is a feeling I recollect in every flight since, always the same and always different.

In the morning light, the cloud resembled a rough-hewn canvas, though its undulations more reminiscent of a drop sheet than a taught stretcher. Before passing through the bank of cloud I studied the surface of the sea along the coast. The blocks of farmland appeared as a patchwork quilt and felt like contemplating colonisation from above.

Eyes levelled at the horizon’s soft gradients of blue, white and yellow, I turned to the purpose of my visit: to review Surface Affect, an exhibition of contemporary painting at the Govett-Brewster Art Gallery. The opening coincided with the eve of the election - whose coverage I watched on three screens at once - and which felt somehow connected to the exhibition’s focus on the politics of the surface and its affects.

Surface Affect features works by Amanda Gruenwald, Jeena Shin and Michael Zavros in an unlikely yet vibrant interplay of contemporary biomorphic, geometric and photorealist painting. It is curated by Govett-Brewster Art Gallery Director Simon Rees, and displayed in the large gallery of the Len Lye Centre. The gallery’s ceiling is studded with bright LEDs which flood the room with white light. It is open, airy and affords a generous amount of white space in which to float the works, echoed in their collective use of white paint.

The counterpoint of the show is immediately apparent in the juxtaposition of new and recent paintings by three artists with very different practices. Rees describes these as practices which talk past each other as well as in conversation. In the wake of large scale contemporary painting exhibitions like Necessary Distraction, it is refreshing to see a show so confident in its minimalism.

Jeena Shin‘s wall paintings address the site directly, in a two-sided composition across a freestanding partition, one side white on black, the other black on white. Viewers familiar with Shin‘s practice will recognise her trademark generative reworking of sliced, fractured and folded triangular forms. Here however, they take on a more cinematic quality, further reflected in her concurrent exhibition Movement Image Time. Rees likens the installation to Len Lye’s direct films, made by scratching the film’s surface. I see aspects of Free Radicals (1958-79) in Shin’s increasingly atomised compositions. They are reduced so far as to evoke clear or black film leader, marked only by the wear of its repeated projection, and recall Nam June Paik’s Zen for Film (1964).

Amanda Gruenwald‘s canvases respond to a range of modernist traditions with a fluid and open ended process. Her influences include the Delaunays, de Kooning, the Fauvists and the colour field painters. In a contemporary context, her poured and brushed paintings feels somewhat cooler and more self-referential, particularly given the way their titles prosaically detail their dominant palette. Yet some titles also layer associations in the appropriated names of their paint colours, such as Alizarin Pink (2016) and Chartreuse, Violet, Blue (2017). Rees likens her largest, and arguably strongest work, Cerulean Pink (2016), to a Nicholas Poussin cloudscape. Abstraction is particularly challenging for contemporary painters, given the territory has been so thoroughly worked, haunted by its legacies and the more recent spectre of ‘zombie formalism’. Against this backdrop, Gruenwald manages to resolve a suite of works which feel visually fresh in the here and now.

Australian artist Michael Zavros presents a range of recent photorealist works in oil on canvas, aluminium and board, accompanied by several large photographs. Zavros‘s practice tends to polarise audiences, resulting in an apparent array of lovers and haters. Given his prominent career success, clearly the former outweigh the latter. Most insiders I’ve spoken to appear to have a strong opinion either way, something which ultimately supports the work by maintaining an investment in ongoing dialogue concerning its politics and reception. In a text written to accompany Starkwhite’s Michael Zavros Stand at Art Los Angeles Contemporary last year, Robert Leonard put it well:

By picking subjects that seem to be prime candidates for deconstruction and critique but not deconstructing or critiquing them, Zavros flaunts and frames his lack of ‘criticality’. Consequently, he has become a shibboleth. People either love him or loathe him. Those who love him think his work epitomises what art should be (which is what they want or have, like or are). And there are lots of lovers—he now has 75,000 Instagram followers. Those who loathe him think his art is everything that art should not be (class, privilege, and ideology). When the knockers learn that Zavros has won another prize or been included on yet another best-dressed list, they groan in unison. Paradoxically, I think they are the ones who grasp his strategy best.

Zavros foregrounds the numerous problematics at play by citing ‘bad boy’ envelope pushers Jeff Koons and Richard Prince as key influences, his practice articulating a desire to “do what I’m not supposed to”. These tensions are eased by Zavros’ genuine charm: he is an open, warm and confident man who is easy to like.

During the artist talk, Zavros described his work as “haunting trophies”. Reading Charm Offensive, an earlier text of Robert Leonard’s, I realised I may have misheard this, given the reference to “hunting trophies”. Either way, fittingly, contemporary vanitas and memento mori imagery features prominently in this show. A colleague new to the work likened it to painting for Patrick Bateman’s apartment.

The exhibition was my first meeting with Zavros’ work and I found the command of paint seductive. It is an affect difficult to communicate in their photographic reproduction. Sure, this work epitomises a take on ‘post internet’ painting via its integration with Instagram, yet much of the richness of their surfaces is lost when mediated through that platform. Whether appropriated or staged, something important happens when these images are rendered in oils. Perhaps I’m a sucker for the gravitas of the painting tradition, but I recommend a personal encounter with them before making your mind up. There is a further opportunity to do so at his concurrent Auckland solo show The Silver Fox.

There are no ‘get out of jail free’ cards in art, yet there is a disarming dimension to his ‘post critical’ strategy. Zavros’ work arguably operates both as a critique of, and alternative to, the art world’s longstanding reliance on criticality as a hallmark of value. It is a strategy which poses difficult, complex and resonant questions on the function of art in contemporary culture. To an extent, I remain watchful from the fence. Though on the surface this may appear safer, the push and pull of the work make this a puzzling, precarious and sometimes uncomfortable place to sit.

Given my repeated references to flight here, I was reassured by the exhibition catalogue‘s own allusions to elevation. In my book, if art doesn’t get you high it’s not doing its job. As the aircraft descended through the whiteout, and with the worked surface of Tāmaki Makaurau emerging, I closed my laptop and found much to reflect on.