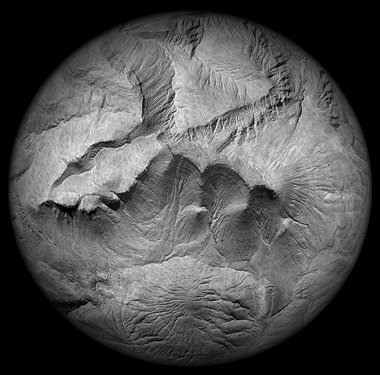 The photographic images appear as apparitions or hallucinations, or as places where nature follows alternate laws. They exude a tension between interiority and exteriority, inner and outer space.

When Jae Hoon Lee first flew in to New Zealand from South Korea his first excursion was to the top of Auckland’s Maungakiekie (One Tree Hill). It was nearly twenty years ago, yet he still remembers the impact of the experience fondly and in detail: the elevated perspective of the land and sky, the Radiata Pine’s unique form, the thinness of the air, the quality of light. A trip to Piha on the West Coast cemented a formative connection to the New Zealand landscape.

Born and raised in Seoul, Lee immigrated to Aotearoa in his mid-twenties after studying Fine Arts at the San Francisco Art Institute. An avid traveller, his artistic re-visioning of New Zealand extends to numerous other countries including India, Egypt, Nepal and Indonesia. Lee also received a residency with Antarctica New Zealand, and the ISCP residency in New York as a winner of the Paramount Wallace Art Award.

Outside of residency experiences, opportunities which arise from the cultural wanderings of tourism and exploration are also folded back in to the work. This process suggests that art doesn’t have to be sought out—it will find you. That said, the experience of journeying ‘elsewhere’ can establish conditions for art to emerge.

In the mood for elsewhere, Lee’s new solo show at Ivan Anthony Gallery, consists of six large photographs and a single channel video work. Here the artist takes a quieter, more restrained approach than his followers may be accustomed to, the photographic interventions so subtle they are at times indiscernible.

An example is the expansive Ross Sea (2018), captured from a lookout during the residency in Antarctica. It seems the water’s surface has been stitched and blended, pinched, warped or colourised in Photoshop. In this ambiguous space one begins to project fantasies upon the image: a fleeting encounter with a giant sea creature, a mysterious force—visible only in its effects—akin to the ocean’s haunting presence in Tarkovsky’s Solaris.

This sense of liminality is echoed in Underwater Phenomena (2018), whose ambiguous vantage point suggests either looking up from beneath turbulent, twisting water, or down from above.

Planet Lonely (2018) parallels the artist’s traversal of places real and imagined with the navigation of media-scapes and ecologies. A layered composite constructed from multiple high resolution stock images, its fantastical post-documentary quality has me seeing an omnipotent hand print in its terrain. A planet as a piece of clay.

In a similar vein, Shelter (meteorite) (2018) presents a quatrefoil shaped meteorite floating in outer space. Its form appears too regular to be natural—a heavenly body.

Perhaps the most convincing composite is Lightning and Sun (2018), a contemporary sublime, albeit in black and white. In contrast, Fishrock (2018) delights in its own artifice. Sections of the rock appear to protrude from the surface of the surrounding water, while others blend almost seamlessly as liquid rock. A hybrid form both animal and mineral, an enchanted landscape or a big trip.

The photographic images appear as apparitions or hallucinations, or as places where nature follows alternate laws. They exude a tension between interiority and exteriority, inner and outer space.

In stark counterpoint to the photographs, Tweet Tweet (2018), a thirty minute video installed in a darkened room, confronts viewers with hand-held long-take documentary realism. It was shot by Lee in Minnanthu Village, Bagan, Myanmar, while on holiday. The camera traces the artist’s movements through the village as he is guided by a young local woman who takes him through some of their homes, kitchens and workshops. In the end he paid her double the going rate.

The footage was shot just prior to the recent genocide and mass migration of Rohingya Muslims, a stateless people who reside in Rakhine State. It is an unforeseen which, for some, may haunt the picture. There is a poignant moment when the camera slowly traces a poster Lee stumbles across. It is a composite image of Aung San Suu Kyi meeting with Barack Obama, the first sitting US president to visit Burma. There are multiple idealised photographs of the scene within the poster, their softened edges a seductive, airbrushed propaganda in local vernacular. It is here the connection to Lee’s collaged photographs is most clearly revealed.

Lee’s wanderings—mental, physical, cultural and technological—engage our desire to be somewhere else, alongside the experience of ‘elsewheres’ mediated by both art and travel. He puts it simply: “I’m still wandering around”.