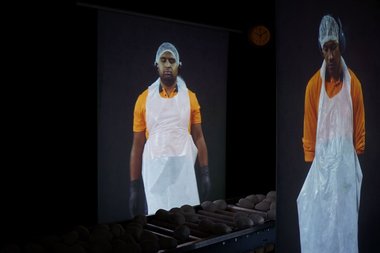 In the Te Tuhi installation components are synchronised with the clock so that every two hours (real time) the ‘worker' videos stop and Al Jazeera begins on the monitor. When the break is over, the news stops and the ‘watcher' videos recommence. A contrast is set up between the numbing dreariness of the factory routine, and the action-filled drama of world news.

Although he did contribute to Ngahiraka Mason’s 2017 Honolulu Biennial, outside of Auckland Tongan artist John Vea is little known for his acerbic commentaries on poorly paid migrant labour—Aotearoa’s Pacific underclass— executed through a series of pungent sculptures, installations, videos and performances. Fortunately that seems to be changing.

Here in Te Tuhi Vea has a walk-through installation where you enter Gallery One through an archway of suspended clear plastic strips, as you would a refrigerated cool store. The sound is of industrial machinery, like that of a busy factory. Inside we find a stand of mechanised rollers (like a conveyor belt) supporting potato-shaped plaster objects that are constantly turning. On the walls are a clock and a television monitor, and on two vertically suspended screens are two videos of two standing men—one each side of the bobbing rotating spuds—employees paid to watch over the vegetables and check they are blemish free and clean, for these potatoes will be converted into chips.

The two men (John Vea and fellow performance artist Matavai Taulangau) are dressed in white plastic caps and aprons, yellow t-shirts, black headphones and black gloves. They look thoroughly bored and tired, lurching a little as they struggle to stay on their feet. Their job means that they scrutinise the potatoes over periods of two hour blocks. Then in the smoko room-during breaks—they can briefly watch the news on Al Jazeera, before returning to the monotonous work.

In the Te Tuhi installation components are synchronised with the clock so that every two hours (real time) the ‘worker’ videos stop and Al Jazeera begins on the monitor. When the break is over, the news stops and the ‘watcher’ videos recommence. A contrast is set up between the numbing dreariness of the factory routine, and the action-filled drama of world news.

Within the installation the turning metal rollers grind away at the plaster potatoes to form lines of white powdery dust on the dark floor underneath. While this byproduct seems unintended, but nevertheless left, there are several interpretative possibilities. One is as an ironic comment on cultural homogeneity (in a so-called ‘melting pot’), where the white (‘European’ New Zealand) coating is scraped off to reveal different cultural complexities (Pacific ones) residing underneath, or else to continually grind away until there is nothing of the ‘vegetables’ left.

The exhibition’s title is a comment one of the factory workers (a Samoan woman) made to the artist, about the importance of looking at such work as being only temporary, a short means to more adventurous, fulfilling (and hopefully more prosperous vocational) ends later on. Thus the show can be seen as a warning to young Pacific Islanders not to go for a situation where they’ll get stuck in a depressingly repetitive, non-thinking job, from which it is difficult to escape. To strive instead for a tertiary education and the possible path to intellectual fulfilment.