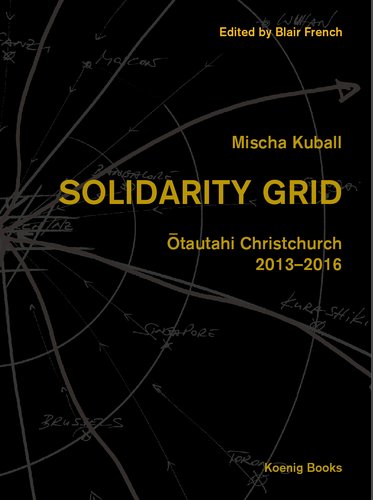 In the original concept the lamps were to be positioned in the inner city, in a core location centred on Colombo Street, where there would be a matrix of interlocking east-west and north-south aligned streets. However because post-earthquake council planning was still unfinalised, and the thought of installing the lights there, and then uprooting them to be placed somewhere else untenable (plus they'd get lost juxtaposed with the conventional inner-city lampposts, needing to be isolated), that notion had to be abandoned.

Looking at the public sculptures installed in various cities around Aotearoa New Zealand, it can confidently be argued, I think, that SCAPE’s Solidarity Grid is the most important example in this country, not only because of the size of the urban space it uses (its visual impact on the banks of the Ōtākaro Avon-especially at night), the accessibility and emotional content of its civic imagery to locals and visitors alike, the ideas it raises about place, and the simplicity and generous sociability of its concept, but also, most strikingly, because of the global reach of its transnational references.

As a catalogue devoted to a single art project in a South Island city (but published by a German publishing house), this is quite a hefty book—and deservedly so. With a beautifully embossed cover, it is packed with varied points of view and different writing styles. Apart from the fascinating in-situ documentation of the extremely variable street lamps (many are ornate cast iron) along the riverside pathway parallel to North Hagley Park’s eastern border, perhaps the most informative texts are the conversation between Kuball and French at the back and French’s own detailed account of the work’s evolution at the front—explaining how the project grew over repeated visits.

Despite the work’s title, these diverse lamps (their casings vary in style from modernist or Victorian to Chinoiserie pagoda-style) are not actually aligned in a grid, but in an undulating linear vector, as you’d expect from following a river. In the original concept they were to be positioned in the inner city, in a core location centred on Colombo Street, where there would be a matrix of interlocking east-west and north-south aligned streets. However because post-earthquake council planning was still unfinalised, and the thought of installing the lights there, and then uprooting them to be placed somewhere else untenable (plus they’d get lost juxtaposed with the conventional inner city lampposts, needing to be isolated), that notion had to be abandoned. Thus the site got shifted to a riverside path which needed public lighting.

The original thinking can be seen in a fund-raising serigraph made by Kuball. It blends two types of grid together: a circular ‘global’ grid expanding outwards on the outside-with radiating lines going to the participating cities—and in the central core, a ‘Christchurch’ block grid of horizontal and vertical lines.

Part of the success of this project is due to the fact that French found a sponsor who generously paid the considerable freight bill for packing and transporting all these lamps to Christchurch. Another reason is that it gave Christchurch the chance to host visiting mayoral and trade delegations from the donating cities, and that the Christchurch City Council worked closely with Deborah McCormick and the SCAPE team in their global communications, providing supporting letters etc. There is also the conceptual wit of the project, using light to reflexively illuminate the lamps themselves as much as their immediate surroundings, but also drawing attention to the invisible social connections that underpin these gifts—the goodwill that forms a supportive global network, radiating vectors that in the print zero in on the stricken city.

I’m really moved by this work. For me, having spent the first forty years of my life living in this city which I left decades ago, I’m delighted to see the palpable intervention of the outside world. It is a great idea to transform the riverbank through this row of cultural and geographic signifiers.

This book is valuable because of its documentation. The photos allow you to study in detail the design qualities of the lamps, because if you examine them outside from the point of view of a pedestrian wandering along Park Terrace (between the Armagh and Salisbury Street intersections) they are too high to get close to. With the book you can also compare the design, colours and materials of the stems and bases, thinking about their cultural origins.

Despite the density of information, I do have one small niggle: there is a city council map included that shows the exact location of the twenty-one lamps, but no identifying key as to which is which—apart from one text saying Düsseldorf is at one end and Sydney at the other. (In the book the photographs and write ups presenting statistic/historical details of each contributing city are sequenced alphabetically.)

Looking at the mini-essays, curator and artist Nathan Pohio, as the Ngāi Tahu representative (they are the principle tribe of Te Waka o Aoraki—the South Island), elucidates in his introduction three important Māori concepts to assist our thinking: koha (a gift or donation); manaakitanga (generosity or support); and whakawhanaungatanga (the reciprocal obligations of familial or friendship relationships). His text is a nice way of leading into French’s explanation of how the project grew, and his setting up of the pre-earthquake (its colonial and pre-colonial history) and then post-earthquake Ōtautahi Christchurch context.

The commentaries are nicely varied as a group. Some, like Lara Strongman’s or Bruce E. Phillips’ contributions, discuss the histories of the relevant section of river and its adjacent landscape, mentally sparked off by the activity of driving past or running alongside. Phillips looks at the theme of international solidarity (writing on Anzac Day), while others like Hugh Nicholson, the principal city council urban designer, talk about the benefits of the chosen site, and Vanessa Joan Müeller, a curator-at-large in Vienna, the recontextualisation of the freighted lampposts.

My favourite text is by Nic Low, a Melbourne-based New Zealander currently doing research in the Southern Alps. He presents a complex short story (centred around natural and manmade catastrophes) that darts all over the place in its incorporation of different time periods, communities, histories and geographies. It is quite unusual, decidedly global, beautifully written, and unusually refreshing when encountered within an art catalogue. Although deliberately fragmented it holds together well, and is very much of our Trump-era / Brexit time in its myriad references.

Solidarity Grid is a major international statement by a visiting artist, as artworks in this country go. It is one of the very best; up there with say, Serra’s legendary Te Tuhirangi Contour in Gibbs’ Farm. This beautiful, immensely interesting book helps cement that reputation.