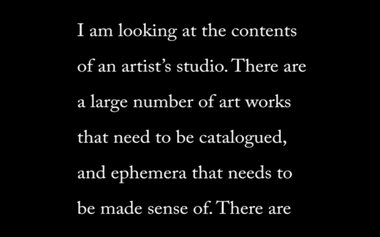 My thoughts are complicated because diaristic work is an established branch of feminist art practice that Shannon has contributed to for over three decades, and it is perfectly natural that she in her narratives, discusses her interaction with members of her family, especially people she loves like the late Julian Dashper, and Leo their son. Where I get fidgety is when it morphs into artworld myth-building, especially market promotion—for Dashper in particular.

Initially on at the same time as Shannon’s Rooms Found Only In the Home survey at the Adam in Wellington, Short Stories in this local artist’s dealer gallery presents six framed (mainly silver gelatin) photographs and seven single channel videos. Of the videos, one is projected, two are on largish monitors, and the rest are on small laptop-sized screens (sometimes in sequential bundles).

Because art as an anthropological concept is a construct, I enjoy its artificiality—the fact it is a lie: the product being far removed from its maker. For this reason I am suspicious of art that is emotional and affects transparency, that minimalises its inherent distance. Diaristic activity (like these works, that deal with interiority) tends to do that. And is prone to self indulgence.

My thoughts are complicated because diaristic work is an established branch of feminist art practice that Shannon has contributed to for over three decades, and it is perfectly natural that she in her narratives, discusses her interaction with members of her family, especially people she loves like the late Julian Dashper and Leo their son. Where I get fidgety (in my own self-centred ‘diaristic’ explanation here—yes, I see the irony) is when it morphs into artworld myth-building, especially market promotion—for Dashper in particular. He is someone I’d rather not hear anecdotes about in a gallery: I prefer to look analytically at his work when it is there, enjoy it for what it is and not get caught up in personality cults and any of his self-promotory narcissism. Nor the stifling claustrophobia that too much art historical hermeticism induces and which his name sometimes attracts.

In the past, my favourite Shannon video has always been Cat Medicine where she shows you how to get a cat to swallow a pill. I tend to dislike cats (by virtue of the fact that I’m particularly fond of birds and lizards) but I’ve always found this late nineties work (not in this show) entertaining; watching the twisting feline resist her efforts to prevent it from spitting out the tablet.

I happen to find Car Stories, a video here at Clark’s, similarly engrossing, because as with cats, I dislike cars. I’m puzzled why artists would find them interesting, so to me this video is enlightening. It discusses (via her voiceover) the various cars she has owned or regularly driven in her life, and in particular her own, her mother’s and Julian’s interest in automobiles. It made me think about families and how enthusiasms get passed on to future generations. (In my own case I’ve never had friends or relatives who were remotely interested in cars. They were functional machines that were not regarded with affection. Maybe the subject simply never arose in conversation when I was around, although perhaps it did as ‘design.’)

With the three videos of white Garamond text moving on a black field, one has touches of pink added and textual phrases that arrive in horizontal bursts (the timing and pauses tightly controlled), another the text vertically scrolling up from below, and the third the text positioned intact for each sequential replaceable page. The Rooms in the House (2016), What I am Looking At (2011) and The Aachen Faxes (2012) can all be viewed online here, read in the warmth of your own office while sitting in your favourite chair. They deal with domestic spaces and the accumulated collections within them, the problems for loved ones of managing artworks left after an artist has died, and transglobal communication when a loving couple are physically separated.

One has no sound at all, another has Shannon reading the words aloud, and the last has beautiful cello music. Rooms and Looking have a lot of lists while Rooms (featuring Leo’s thoughts on his parents’ knick-knack collections and the spaces where they are kept) and Faxes (samples of Julian’s intimate commentary to Marie while doing a residency in Germany) both mention the family cats.

The stories Shannon tells in her videos are carefully organised and shrewdly paced, but in this age of social media where subjectivity rules, the subject matter and style seem mostly ordinary. They are at least a decade too late. However the best ones cleverly surprise you with twists in their narration, when you suddenly find yourself being shocked. In Rooms, Shannon describes locking the young Leo in a room as punishment for being naughty, and you are astonished by her candour with her meanness. In Looking she tells of hearing a car pulling up outside her home in the dead of night and the male driver yelling obscenities out the window at an unknown woman, and here you worry about her safety.

With Shannon’s framed textual photographs, I prefer the dark ink on plain paper texts to the white inked texts laid over images of the sea. Their simplicity as exposures appeals to me on a formal level—and amuses—but their content, the artist’s explanation of projects she never ended up completing, she should not have made public. I can grasp her possible reference to Lawrence Weiner and his idea that a textual explanation is as valid as a physical sculpture in non-illusory space, but as ‘out-takes’ they end up like bonus tracks on reissued CDs—conceptually interfering with other earlier ‘completed’ and generally admired artistic statements. They are best forgotten.

More interesting is her photo of a Dashper photograph he took in Aachen, wrapped in Tyvek. Symbolically it seems to embody fading memory and grief, and perhaps, a flourished brand by virtue of his name and mysteriously hidden image.

So there you have my ambivalent thoughts. Some aspects of this show I find irritating, while other areas are dramatically compelling, funny and engrossing. Worth exploring if you can separate one from the other.

I trekked to the Trish Clark Gallery to look at Marie Shannon's show 'Short Stories'. Making 'art' (whatever that is ...

I trekked to the Trish Clark Gallery to look at Marie Shannon's show 'Short Stories'.
Making 'art' (whatever that is - it's a bit like 'God') that is drawn from the mundane material of everyday life, will itself be mundane, probably. But so what?
Visual art does not require much time of the viewer unless something grabs you by the throat and drags a visceral response out of you.
And yes, I felt that. I am not remotely interested in videos but one work in this show knocked me for a six.
'The Aachen Faxes' (2012) was strung-together excerpts of communication from Julian Dashper, Shannon's late partner. Accompanied by an astonishing audio-dirge,the effect was emotionally powerful in the extreme. It forced me to make a quick departure out the side door into the street, wanting to bawl my eyes out.
We women! Our diaries! Our keepsakes! Our feelings! Yeah, 'self-indulgent' - but so what?