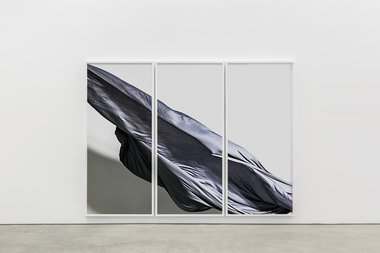 In Durkheim's theory emotion is a seemingly ambiguous force that circulates indiscriminately in the world. However culturally, emotion is tied to the politics of everyday interactions. With this view in mind the curator cites feminist scholar Sarah Ahmed who argues that emotions exist as ‘impressions between things' and are experienced when emotion, thought and feeling are indistinguishable.

Since 2002 Gertrude Contemporary has partnered with the Next Wave festival to support and mentor early practice curators. This year independent curator Zara Sigglekow‘s group exhibition Great Movements of Feeling explores the way in which artists observe emotion from either a historic or personal viewpoint. While responding to the rich history of theory and debate around emotion across philosophy, psychology and biology, Great Movements of Feeling presents a select group of contemporary artists whose works encounter various positions on the spectrum of emotion as either a cognitive function, a visceral experience or somewhere in-between.

The title is drawn from sociologist Emile Durkheim’s belief in the ‘contagious current of feelings’ that emerges from a crowd. In Durkheim’s theory emotion is a seemingly ambiguous force that circulates indiscriminately in the world. However culturally, emotion is tied to the politics of everyday interactions. With this view in mind the curator cites feminist scholar Sarah Ahmed who argues that emotions exist as ‘impressions between things’ and are experienced when emotion, thought and feeling are indistinguishable. Both theories rely on an unconscious quality of emotion, arising from our unarticulated framework for interpreting the world. As such emotions emerge from both cognitive belief as well as those beliefs not yet fully conceptualised.

There is a historical weight to the emotion embedded in these works. In An Intimate History of Humanity, philosopher and historian Theodore Zeldin argues that ‘over the whole of humanity… individual emotions have been collective emotions passed down through generations.’ From supernatural, temporal and psychological movements, objects are implicit in constructing feelings and identities for individuals, families, societies and countries, where emotional meanings are created in and across time periods. The Flemish stained-glass window from the late 15th century depicting the Virgin Mary as ‘Woman of the Apocalypse’ gestures to the movement of emotions through history.

The way in which we understand and express our feelings has been transformed throughout history. In her video work, This Creature, Sriwhana Spong explores the sensorial experience of emotion as she reflects on the female Medieval mystic, Margery Kempe, who wrote the first recorded western autobiography. Spong films with an iPhone as she walks around Hyde Park, touching and caressing inanimate objects like stone sculptures and wrought iron gates; at the same time a voice-over ruminates on the writings of Kempe. Both women experience an intensity of feeling—Kempe via hysterical weeping and Spong through touch, and her ‘unusual desire to lick inanimate objects’—exploring the boundaries of sensorial elements of emotion.

Sue Williamson’s It’s a pleasure to meet you explores loss, anger and forgiveness. Williamson uses the power of agency and testimony via a documentary style, in her large-scale video work to probe the complexity of anger connected to personal trauma. In this work two young South African’s discuss the death of their fathers, both killed under Apartheid. The woman has chosen to forgive while the man still retains his anger. The potential to transfer emotion to the viewer is disrupted here as the viewer experiences empathy, rather than taking on the victim’s pain. Zeldin suggests ‘the past haunts us but from time to time people have changed their mind about the past’ and that ‘people have never been able to have a new vision of the future without first revising their idea of the past’—thus opening up a vast array of options.

Australian artist Megan Cope’s newly commissioned installation consists of two works. The Empire Strikes Black I (Some Animals Are More Equal Than Others) subjects the viewer to a harsh sensation by flickering strobe lighting which illuminate the text ‘Some Animals Are More Equal Than Others.’ The text refers to George Orwell’s Animal Farm and the hypocrisy of the psychological trauma she has been subjected to. In The Empire Strikes Black II (Self Determination) Cope hangs a section of paperbark (with the words self-determination painted on its surface) from the ceiling. In an accompanying text she reveals ‘this is what it feels like to be hung out to dry….’ The work is a poignant exploration of personal pain, generational pain and old ways of inflicting fresh pain.

Also commissioned for the exhibition is Helen Grogan’s video work splitting open the surface on which it is inscribed, which consists of a 15 minute choreographed score, filmed from three distinct camera views. Grogan is ‘concerned with systems of observing, sensing and locating’ and with the ethical tensions of how a subject encounters an object, seeking to interrupt this relationship. Simultaneously encouraging a more considerate relationship between viewer and object, it results in an emotional empathy between viewer and artwork and gallery space.

Universality can be too dismissive of the multiplicity of emotional expression and experience. In her exhaustive catalogue essay Sigglekow resists prodding the viewer into devising connections between the artworks. Instead ‘a loose notion of emotion’ is suggested, to enable a softer space to contemplate ‘the other’ without the possibility of fully knowing. Each work is loaded with its own personal or historical feeling and accordingly the gallery space becomes a place for politely encountering difference. The artists refuse to project emotion onto the viewer. Instead the works imply a resolution of emotion—an expression or a processing of feelings—that results in a more meaningful encounter with emotion. And the possibility for increased empathy in encounters of difference. 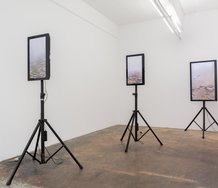 Louise Bennett
The Light Between our Oceans