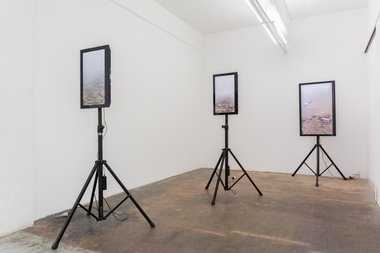 Bennett's soundscape provides the framework for a bodily experience of the work and penetrates deep into the listener's subconscious. The complicated relationship between the audio and visual is deliberately disorienting and confusing, and acts by sidestepping the intellect, to evoke an automatic physical response. A disorientation of logic creates a shock that jolts the viewer back to a bodily experience of the work.

Louise Bennett
The Light Between our Oceans

Louise Bennett‘s new work for BUS Projects, The Light Between our Oceans, continues her investigation into how our concepts of and engagement with nature and reality shift in a contemporary culture dominated by screen-based technologies. By interrogating the material qualities of video, The Light Between Our Oceans explores the mediated space separating our experience of reality from our perception. Here Bennett adopts the haptic nature of video and the physical aspects of sound to interrupt the viewing process in order evoke a contemplative, multi-sensory viewing experience.

With this work originally created in Lima, Peru, Bennett approached The Light Between our Oceans as a sound installation; a three track audio work linked through a visual display. Much like the Canadian multimedia artists Cardiff and Miller‘s multilayered sound installations, Bennett chose to install the monitors vertically on stands so they could act as speakers, and positioned them diagonally to reconcile the varying acoustic levels.

The soundscape provides the framework for a bodily experience of the work and penetrates deep into the listener’s subconscious. The complicated relationship between the audio and visual is deliberately disorienting and confusing, and acts by sidestepping the intellect, to evoke an automatic physical response. For example, the cheerful sound of festivity - people laughing and celebrating - is heard as the camera captures the sky from an aeroplane during take-off, and we hear a shower running as the camera pans across the desert. An idyllic sunset is interrupted by the sudden sound of a gunshot, which we quickly realise is fireworks. This disorientation of logic creates a shock that jolts the viewer back to a bodily experience of the work.

Like the fractured narratives of Cardiff and Miller, Bennett‘s intention is to build a new structure with sound and use the audio to imbue the work with the dimensionality of sculpture. She achieves this by overlapping the three different sound recordings: closest to us is a female voice singing softly in the shower; in the middle we hear the ocean breaking and the sound of traffic, with moments of kissing and music in the home; furthest away is the loudest sound of fireworks and celebration. This sensory information received aurally, along with the fragmented visual footage, constructs a complex and layered perception.

Accompanying the soundscape, the 15 minute video - recorded on a mobile phone - is shown simultaneously but slightly desynchronised. The viewer observes fragmented footage of a foggy Lima landscape, which is taken periodically through the window of a moving vehicle, or from an aeroplane window. The camera is often moving and sometimes fixed on a blurry horizon, an inverted cityscape or staring at a brilliant sunset. The viewer is pushed and pulled as the work oscillates between representation and abstraction, rendering the non-fixed horizon hazy and obscure. This in turn frustrates the viewer’s optical knowledge and instead invites haptic speculation.

In her book Touch: Sensuous Theory and Multisensory Media, Professor Laura Marks explores the haptic nature of video art, suggesting ‘many of these works seem to express a longing for a multisensory experience that pushes beyond the audio visual properties of the medium.’ Bennett utilises the haptic qualities of film such as variable focal length, under and over exposure, graininess, pixel density and contrast ratio, most of which are inherent characteristics of low-resolution video. For example, in one scene she zooms in to a foggy, moving horizon, drawing the viewer in and pointing to the pixels, light and sound. Bypassing the optical image creates a sensation which impacts how the viewer relates to the image invoking an embodied, multisensory experience.

In The Light Between our Oceans, Bennett interrogates the video medium to explore our mediated perception of reality as we navigate technology. In our contemporary screen-based culture, and ceaseless documentation of human existence, the more our world is perceived in a language of visual images, the more that is left unexpressed. Bennett’s exploration of the relationship between optical and haptic ways of seeing, allows us to compare alternative ways of knowing and connecting with one another. 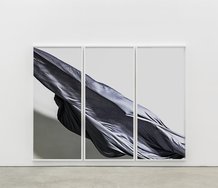