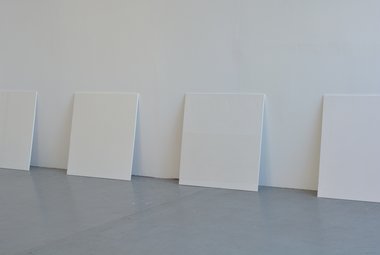 His works are not conventional canvases. Thompson has learnt the art, the industrial art, of creating his own plaster boards. They mimic in their substance and configuration the materiality of manufactured plaster building board, and thus the connection with architectural form is made all the more pointed.

There were the ubiquitous white walls of the gallery space. Then inside that space white rectangular boards were hung or lent up against those same walls.

My first viewing of Trent Thompson’s exhibition, In Lieu, at Skinroom  gallery, was a whiteout experience. Almost. The minimalist white aesthetic of the works called to mind the early beginnings of the school of abstraction and the work of Kasimir Malevich. His white-on-white constructs proclaiming the “supremacy of pure feeling” were evoked as one stood in the gallery, looking from wall to wall.

Some of the Russian’s works, it will be remembered, were positioned in the corner of two walls, recalling the practice of the placement of Russian religious ikons. This was modern art plunging into the “infinite” as it only could in the early twentieth century, post Darwin but pre Hubble, circa 1917.

Others, like Kandinsky, would talk up the power and metaphysical grunt of art and later the American Abstract Expressionists would do the same. But this overblown rhetoric couldn’t last. Post-Painterly Abstraction and the Minimalists of the 1960’s would see to that.

Canadian born Thompson continues in the tradition of those Minimalists with their austere, self-sufficient aesthetic. Yet there are lingering echoes of such a ‘mystical’ vocabulary that find expression in the accompanying small booklets (placed in the gallery) containing gnomic utterances, elliptical poems that elicit ruminations to do with form and space.

Here is one which hints at reaching beyond simple reflections about colour, shape or line and strives toward some apotheosis concerned with the sublime.

Moments are few when
elements adorn the field
dressed in such hues that
afford a subtle
quickening of the heart
whereby you ease into
your position amidst
horizon, operating at
once as a cosmic conductor
and conducted — looking
for no other different.

The booklets are full of such poetic pronouncements.

Having said that, Thompson, with a background in architecture, is certainly interested in elements of pure shape, form and ‘colour’ for the works interact with the gallery space, pushing and pulling against the floor, the ceiling and the walls. Indeed, in one instance, the placement of a work lent against the wall, plays off perfectly against a recent section of geometric plastering of the gallery wall itself.

His works are not conventional canvases. Thompson has learnt the art, the industrial art, of creating his own plaster boards. They mimic in their substance and configuration the materiality of manufactured plaster building board, and thus the connection with architectural form is made all the more pointed.

The surfaces are white but involve the subtlest of hue shifts, often delineated by what has been a masked line. There are also small textural notations in some of the surfaces.

Like most artists, Thompson is very particular about placement and lightening. He is concerned with gap and shadow and the relationship of each work and their rapport with the room itself.

“How thick is a room?” he asks. And offers the suggestion that “there is space in that line.”

All the individual works essentially come with the same title: hydrocal white, a direct reference to the process and medium involved in the making of the boards — gypsum cement, used for slip latex and case moulds.

One other factor is referenced with regard to the nature of the works — the notion of fragility. Not only does the play of light create visual change and thus a sense of transience throughout the day, as illuminations shift and move in the gallery space, but the vulnerability of the materials themselves are exposed at the edges of the boards.

Thus things, as the artist says, are “perpetually fleeting”. But then he adds, “So too are we in this flesh, steering our lived days.”

Minimalists were often charged with the claim that their works lacked expressive function. This artist seems to be concerned with both formal elements and ideas that reach beyond simple aesthetics. His work approaches the no nonsense aesthetic of early seventies Minimalists, artists like the late Robert Ryman or Donald Judd who like Malevich had a hint of mystery in the mix, hovering between architectural formulation and existential exploration.