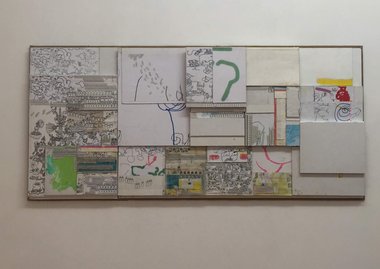 It is hard to say in both cases what is convenient style and what is psychologically ‘genuine'-what is an appropriated visual ethos, and what has emerged from their inner core (or artistic souls); if you believe such things exist.

Trust is a really nice name for an exhibition. It sets out clearly the nature of a relationship between a loving ‘artist couple’ (Burton showed last year at Ivan Anthony and Sadikeen was included in Dirt Future at Artspace) and it also acknowledges the considerable sacrifices art consumers make, as well as art producers.

The differences between the two artists are very apparent. They work well together as foils.

Rea Burton’s paintings and drawings reveal a ‘Punk Fauve’ (‘Grunge Nabi?’) sensibility, featuring Expressionist colour (not the distortion) where chroma and figurative narratives dominate. They are vaguely reminiscent of Mimmo Paladino, and with less modelled plasticity than in the Anthony show, looser, flatter and more fluid—avoiding Paladino’s trademark stiff verticalities. Plus there are ‘sentimental’ elements thrown in, reminiscent of early Picasso.

His works are finely detailed, blending a raw and casual off-handedness with super fastidious precision. Because of their glued layering and delicate intricacy (in the cutting out process) they are labour intensive. These geometric, architectural constructions seem driven by compulsion. Only the occasional scribbled line is coloured.

Sometimes they feature transparent glass on which more layered card has been added. As abstract wall sculptures they blend spontaneous gesture with curtailed geometry.

Sadikeen occasionally also does interesting looping drawings of faces where the pencil never leaves the surface of the paper so that the line looks like dropped string. His line has affinities with the Art Brut artist Francis Palanc, who was obsessed with letter forms, but meandering and wobbly instead of hard, straight, jack-knifing linearities—which is more Sadikeen’s cut cardboard, with its protruding edges and overlapping fragments.

In this show Burton and Sadikeen also butt their different styled drawings together in a horizontal line on the wall, approximately alternating pages (or blending) to make a collective statement, as well as presenting larger works in isolation. It is hard to say in both cases what is convenient style and what is psychologically ‘genuine’—what is an appropriated visual ethos, and what has emerged from their inner core (or artistic souls); if you believe such things exist. Their personas differ, yet march to the same beat as interesting but manipulated, intriguing contrivances.