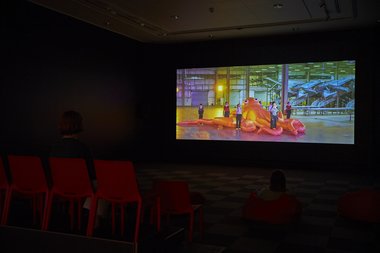 Beauchamp is clearly keen to increase the venue's audience, to leap free of any hint of academia's confining bookishness, over-conceptual subtlety, or trendy currently-favoured art media. On the back of her handout she states: 'Art Can Be Fun'—overstating the obvious perhaps—and has written an essay that is conspicuously short for such a comparatively complicated show. It is not out to loquaciously overdetermine the meaning of the selected contributions.

In the first show at the revamped Gus Fisher with Lisa Beauchamp at the helm, the new English director/curator gives us a sense of her interests and taste, applying them to a show that looks at the realities of corporate greed and the public relations (as in the exhibition’s title) that attempt to hide it.

It also gives us a sense of how she likes to use architectural space. There are sixteen artists (some with several works), and the hang is a bit cluttered in the central courtyard and small back room. You have to bodily negotiate your way around many of the obstructing exhibits.

That being said (I obviously prefer much more minimal understated presentations) Beauchamp overall shows an admirable avoidance of over-abstracted or mentally dry art: the show is not typical of most seen in Aotearoa’s university galleries. It has humour and sensuality, plus is a truly unorthodox (and democratic) mixture of many art types. These include the ‘high’ and the ‘low’; the philosophically complex and the gut-level intuitive or celebratory physical; and the rarefied and the ‘vulgar’ (overstated satire that revels in the obvious, as with the style of Prentice’s painting, and the content of Tiatia’s video and Rachel Maclean’s auxiliary film in St Kev’s).

Beauchamp is clearly keen to increase the venue’s audience, to leap free of any hint of academia’s confining bookishness, over-conceptual subtlety, or trendy currently-favoured art media. On the back of her handout she states: ‘Art Can Be Fun’—overstating the obvious perhaps—and has written an essay that is conspicuously short for such a comparatively complicated show. It is not out to loquaciously overdetermine the meaning of the selected contributions; as essays from many institutional curators are prone to do.

The star of the exhibition is unquestionably the Chinese artist, Cao Fei, who recently had a big show in City Gallery. Her narrative film and documentary video (Asia One and 11.11) in the darkened Gus Fisher screening room are riveting examinations of China’s new embracing of the capitalist/corporate ethos, focussing on the activities of JD com. (an equivalent of Amazon) in Beijing, and how the lives of individual employees are affected.

One moving image contribution focusses on the quiet eerie space of a huge warehouse and packaging plant, and other on the hustle-bustle of inner-city Beijing, as busy couriers make deliveries. Both of these elegant hour-long works are engrossing, and deal with expected themes like automation, worker and robot surveillance, labour relations and commercial greed—but in a refreshingly compelling way, with great editing and extraordinary cinematography. And surprising candour from some of the interviewees.

As a sympathetic (but ironic) installed emphasising accessory to the clinical sterility depicted in Asia One, Emily Hartley-Skudder’s bathroom accoutrements (sinks, liquid soap and their cute renderings in accompanying pictures) are a nice balance in the show’s floorplan, a surprising physical intervention on behalf of dirty-handed sweaty workers, and a droll comment on the huge cut-out hand (a projection screen) of Cushla Donaldson’s adjacent luxury liner video installation.

Nearby in the central courtyard are three time-card processing (‘clock punching’) machines from Deborah Rundle, showing a witty but scary transmutation of an eight hour factory day to infinity. There is also an ‘anxious’ rocking chair (with squeezable stress balls) from James R. Ford that critiques mind-numbing repetition. This is set up for constant (‘productive’) motion where—inspired by John Baldessari’s screenprint in the film room—workers ‘learn to dream’ on behalf of management. Gabrielle Amodeo’s looped video of a constantly running ‘blue boy’ in the foyer, based on the famous Cerebos Salt ad but missing the pursued chicken, underlines this exploitative theme.

Some rebellious workers might even ‘learn to dream’ for themselves. Aroha Novak’s extended text-covered ladder, leaning precariously in empty space towards the ‘glass ceiling’ under the high dome, invites ‘fantasies’ of social mobility from Maori and Pasifika employees but is barricaded off by ostentatious velvet ropes and gold coated posts.

The search for fairness is expressed in Billy Apple’s critique of the sloppy logo design of the Four Square grocery chain, where the ‘unsquare’ motif contradicts the espoused aspirations for the equivalent of a ‘square deal’ for the customer. Apple offers a symbolically accurate version of the famous logo, subtly correcting the proportions.

The late Julian Dashper, on the other hand, fixates on the three colours in the Four Square design, his Untitled (Four Squares: for Richard and Donald, both born 1928), 2008, playing on the paradox of numerical incongruity, and the simple pleasures of monochromatic fields. His project is actually at odds with the corporate theme of Beauchamp’s project, but his contribution’s wit speaks to the pleasure of counting (like McCahon or Bochner), the exhilarating amguities of language, the joys of contradiction and paradox, and the exuberant mysteries of extended physical colour. A fitting complex highlight in this complicated but extremely cohesive show.