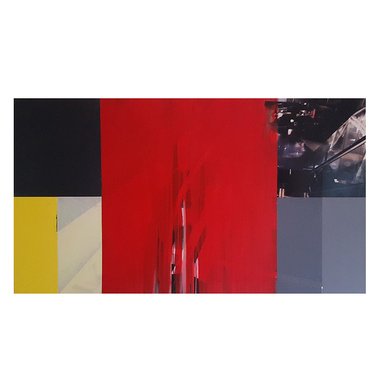 If the artist were not pondering these issues that jump off our television and computer screens every day, does it matter? If not, maybe that's a good thing? Do we look at them like audiences looked at Robert Rauschenberg's screen-printed paintings in the early 1960s, images that were very open in their interpretative possibilities? Or are artists and their audiences today too obsessed with meaning anyway? Can't sensation just be appreciated for its own virtues?

As we drew close to the next floor, I could see a green glow coming from under the crenellated slit where the escalator steps disappeared; and as soon as I stepped off, onto oddly immobile linoleum and then a tundra of carpeting, the soft sounds reached me from some department I knew nothing about…

The nine paintings presented by Ron Left at Artis show his characteristic skill in formal painting construction while alluding to complicated themes. They come in two groups: The Shadow Paintings, and the Escalator series, both allowing him to create a hybrid of black and white photography mingled with rectangular painterly abstraction that uses carefully positioned (butted together) blocks of thin colour on top. The latter series continues some of the references and themes that Left presented with a huge (multi-panelled) work at AUT’s St Paul St Gallery in 2017.

With braced aluminium panels providing support, Left employs this thin paint (on some occasions it is opaque) to play off (with high-keyed vertical oblongs) photographic black/white narrative—that is often detectable beneath the thin skins of pigment—against the origins of Abstract Expressionism and the pioneering work of Hans Hofmann, and the grid structures of the young Elsworth Kelly of the early fifties. In his AUT show he included figurative painting that alluded to Jasper Johns and the New Zealand painter Ross Ritchie. Now the figuration is left only to the photographs, many of which hide behind these veils of paint.

The Escalator works feature barely detectable escalators inside airports (sometimes rendered in diagrams), while the Shadow series depict (without paint covering) the feet of people in queues standing in the rain on reflective puddle-covered streets, or darkened murky alleyways where very little detail can be detected. Often recognisable images are repeated. Pouring water is a common theme in both series.

In these paintings there is much wit connecting the photographed images with the nearby paint application—its methods: using fluffy rollering; house painting brushes; or splattering, pouring and dripping. The descending steps of an escalator (seen front-on) play off against gravity’s pull on flying globules of liquid paint that land on shiny water-resistant aluminium. Sometimes the photographs seem to be showing rivulets of cascading water.

Where the blocks of painted colour butt together (sometimes via separate panels) there occasionally are ‘corroded’ sections where the flat planes of pigment seem to have been devoured by silverfish. Parts of the edges look eaten away, showing bits of photographic image underneath.

All these tropes of photographed escalators, shadows and (also prevalent) watery reflections: are they metaphors, similes or symbols for some wider theme pertaining to global humanity? If one was thinking overtly in political terms—albeit extremely nuanced ones—do the escalators denote trans-continental population movement and the shadows the forces of repression or obstruction for example, trying to block the fluid channels of migrating families?

The question arises: Is it a matter of consequence either way? If the artist were not pondering these issues that jump off our television and computer screens every day, does it matter? If not, maybe that’s a good thing? Do we look at them like audiences looked at Robert Rauschenberg‘s screen-printed paintings in the early 1960s; images that were very open in their interpretative possibilities and more amorphous and ‘abstract’ than, say, Andy Warhol‘s at the time. Or are artists and their audiences today too obsessed with meaning anyway? Can’t sensation just be appreciated for its own virtues?

And Left’s painted films of transparent colour, how do we arrive at a political position from those, if we are so driven? Left does not seem to care about detailed elucidations about specific images and their possible narrative content. His artist’s statement instead indicates a dislike for hermeticism, any separation of art from life. Of his paintings, he says “They explore a basic premise of an inherent connection between things, and a denial of a self-contained, hermetic form of abstract painting.”

Of course the photographs are very carefully picked—they are not random. He presents a challenge. They surely mean something he regards as important. Today’s zeitgeist being what it is, it is not that baffling.