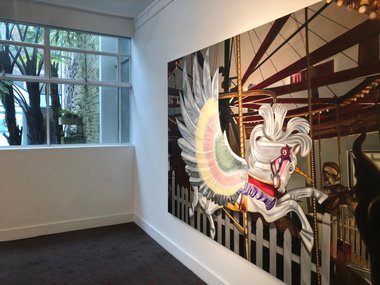 'Merrily Go Around' is Woodings' latest exhibition, seven large works in total and 18 months in the making. It uses the carousel animal from carnival shows to make various unambiguous political comment. Indeed, the judgements made are conveyed in a direct analogous fashion that uses the allegorical form.

Some artists, perhaps indeed most, at a certain point in their development, hit upon a particular single mindedness of vision when it comes to their appointed subject, and the manner in which they deal with it. That could easily be said about Christchurch artist, David Woodings, who for the last couple of decades has made the depiction of arcade machines and carousel animals his constant theme, treated in a photorealist style.

He is captivated by those mall machines which, on receipt of a coin in the slot, simulate—for the modern, whining, jaded child—a gentle ride on some shiny colourful construction. This is the iconic urban image, an amusement jaunt on an oversized toy to help make the shopping experience for the family that much more congenial. Capitalism has a thousand hidden (and not so hidden) persuaders.

These he employs, not for their own sake, but often for political ends. A few years ago he took this motif and worked it up to make pointed comment about the slow pace and dearth of action associated with the Christchurch rebuild, post-earthquake. He juxtaposed his gleaming arcade machines (red helicopter and ‘baby’ fire engine) against the dark ruins of the city, but unfortunately these bright glossy ride-on vehicles, emblems of rescue, were stickered with “out of order” signs.

Currently showing at the Wallace Gallery, Morrinsville, Merrily Go Around is his latest exhibition, seven large works in total and 18 months in the making. It uses the carousel animal from carnival shows to make various unambiguous political comment. Indeed, the judgements made are conveyed in a direct analogous fashion that uses the allegorical form. One is reminded of the recurring opening scene to the recent televised series of William Thackeray’s novel, Vanity Fair, accompanied by a haunting rendition of Bob Dylan’s All Along the Watchtower, which employed the image of the carousel to embody ideas to do with life as an amoral merry-go-round.

Perhaps the strongest of the works in the series is Only the Inescapable is Probable, a large work (1500 x 1800 mm) where the artist has been inspired in the creation of his backdrop by the style of Caravaggio. There hangs over the whole russet-coloured carnival structure an air of melancholy, while the decorative birds in startled flight add to the somewhat ominous feel, that is part of the apocalyptic vision heralded by the scene. Looking through a gap in the roof of the carousel, we spy part of a portentous enflamed red sky, an omen of imminent cataclysm.

The artist has selected an aquatic animal as his carousel creature of choice, in this dizzy merry-go-round amusement ride, a whale, whose presence, from a political perspective, conjures troubling historic memories of early New Zealand and the environmental slaughter of the slow moving “right” whale; and by extension, the more contemporary issue to do with global ecological calamity.

Other paintings make various quotations to other notable politicians with not too subtle titles, like The Empty Vessel has the Loudest Sound. Woodings doesn’t hold back, and he provides visual clues in the paintings as to who he might be alluding to.
Reaching outside the local context he references a certain American in a work that presents a Donald Duck arcade machine—with a pointed jibe at someone making American ‘great’ again.

The photorealists often selected imagery that would show off their painstaking craft to best effect, and so artists like Audrey Flack in her still-life scenes of dressers covered in cosmetics—tubes of lipstick, perfume bottles and the like, made a feature of the shinning gleam and gloss of these items. Others did the same with car bonnets, shop windows and tomato ketchup containers.

Woodings’ choice of subject matter follows in the same tradition, making a virtuosity of intricate painted surfaces that capture and reflect the shimmer and glow of light as it hits the surface of his baroque plastic objects. But the added glitter of this contemporary John Bunyan is an allegorical layer he sets down amongst his pitching horses, elephants, ducks and whales as we all go merrily around. We are seduced by the surface glamour of the paint, only to be reminded that a narrative of corruption lies behind the whole brightly polished edifice.

There will be many, who looking out at the world and seeing the mad round-about that it is, will feel in the words of the ‘song and dance man’ from Duluth, “that life is but a joke“. Woodings has communicated something of that in a vivid, adroit and compelling manner.