Art for the Drowned 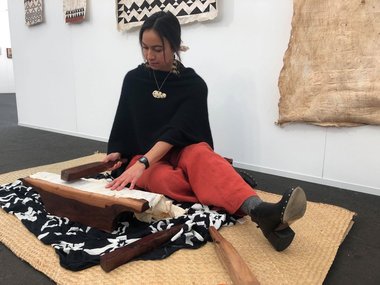 Hindin has exhibited her aute paintings before, but she has never found a venue like Te Uru, where windows look out across the Manukau harbour toward the drowned motu of Paorae, an old link to tropical Polynesia.

Te Uru Gallery is one of Auckland’s majestic buildings. The land and seascapes on its huge high windows often overpower the images on its walls. But the gallery was the perfect place for the work of Nikau Hindin, who has been pounding her way to ancient Polynesia.

In a gallery near Te Uru’s gull-haunted summit, Hindin covered a table with some of the beaters, shells, and dyes she has used to revive the art of Maori tapa making. Aute is the Maori name for the paper mulberry plant, which was harvested, beaten, crafted and painted in ancient Aotearoa.

Two hundred and fifty years ago Cook and his crew noticed Maori women wearing aute ornaments, but by the beginning of the twentieth century the art form had died. A few overgrown plantations survived at Waihihi, an old Tainui colony by the shore of Tikapa a Moana, and at Te Henga, in West Auckland. Old beaters were sometimes pulled from the mummifying mud of creeks and swamps.

About a decade ago Hindin began to hunt surviving aute trees. She tore off their bark with her teeth, beat it with tools she had carved herself, and painted it with dyes she had made from berries. A group, an aute wananga, formed around her.

Hindin explained that making tapa was a way for her to reconnect with her tipuna. The ancestors of her artworks include not just ancient inhabitants of Aotearoa but the many other peoples of the Pacific, who brought seeds and beaters to island after island for thousands of years. Hindin’s work reminds us that the history of Aotearoa is also the history of Mangaia, Tonga, Erromango. Our temperate islands have tropical kin.

Hindin has exhibited her aute paintings before, but she has never found a venue like Te Uru, where windows look out across the Manukau harbour toward the drowned motu of Paorae, an old link to tropical Polynesia.

At the beginning of the twentieth century the journalist and raconteur James Cowan became obsessed with Paorae. He rode tramp steamers around the Manukau, and interviewed elderly kaumatua living on remnants of the Waikato Kingdom. Sitting on a flax bush with a view of the harbour, the elderly rangatira Patara Te Tuhi, who as a young man had edited Te Hokioi, the defiant newspaper of the pre-war Kingdom, told Cowan about a low land, inside the jaws of the Manukau harbour: a peninsula, and later an island, of kumara and taro plantations and windbreaks of brushwood. Tangaroa had digested the land of Paorae, one storm-bite at a time.

Last year I visited a surviving fragment of another low motu in another northern harbour. On a map, Taporapora peninsula resembles an old fashioned teacher’s wagging pedantic finger. The isthmus is named for the broad flat land, adorned with kainga, taro plantations, and a whare wananga, that once extended beyond it, all the way to the mouth of the Kaipara harbour. A sliver of sand and toitoi remains: this relict island is known as Manukapua. Most of the ancient barkcloth beaters recovered in Aotearoa have come from creeks that feed the Kaipara.

It is likely that both Taporapora and Paorae offered some of the earliest Polynesian settlers of Aotearoa warm microclimates, where they could, for a time, raise crops — taro, aute, perhaps even kava — they had brought south in their vaka. The islands are lost links to Hawai’iki.

When I looked from Hindin’s aute tools and paintings to the blue covering of the Manukau harbour, I felt the presence of Paorae, of the deep past, in Te Uru gallery. When I looked further down the Manukau harbour, beyond Paorae, I could just see the hump of Mount Mangere. The boulders and walls of Otuataua, the ancient stone gardens that Maori built below that maunga, glinted like grains of salt in the afternoon sunlight.

The evening after our visit to Te Uru, my wife and I drove past Mangere and Otuataua, to the protest camp on the fields of Ihumatao. A line of cops stood between orange cones on an approaching road, stamping their feet in an effort to stay warm. A few metres away a group of occupiers stood around a bonfire, eating chocolates. In the moonlight the fields’ rows of tents looked like big white stones. It was as though the walls of Ihumatao were extending themselves, pushing east, across the threatened paddocks, in an effort to stop the bulldozers and diggers of Fletchers.

A huge tarpaulin protected the centre of the campsite. At its edge, a small group stood around a flagpole where a bearded man was slowly lowering a crimson ensign. He bowed his head, held the flag against his chest, and folded it carefully, as if it were an old and fragile map.

‘It’s the Kingitanga’s flag, the king’s flag’, a protester explained to me. ‘It goes down every evening, and rises with the sun.’ On fences and gates beyond the tarpaulin other flags flew on in the rain and dark. I saw the Morning Star banner, which normally flies in the balmier skies of West Papua, the flag of the Hawai’ian kingdom, which had been placed upside down in protest, and the standard of Chile’s Mapuche people, with its sun that is also a shaman’s drum.

The flags were hyperlinks. Seeing them, my mind went from Ihumatao to the protest camp on the sacred Hawai’ian mountain of Mauna Kea, where American colonists are trying to build a telescope, then to West Papua, where occupying Indonesian soldiers act as security guards for mining and logging companies, and finally to the homeland of the Mapuche, which was attacked by the Chilean state at the same time George Grey seized Ihumatao and invaded the Waikato Kingdom.

Nikau Hindin’s work might seem at first glance antiquarian, even esoteric, but it is imbued with an internationalism — a homesickness for ancient connections, a desire for contemporary solidarity — that would surely be recognised by the protesters at Ihumatao.