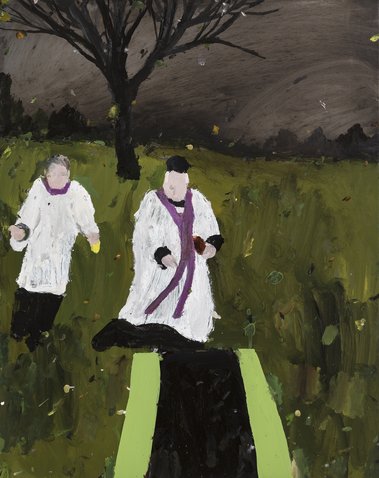 The whole atmosphere is dense with something that reaches well beyond sadness. We are confronted with the quintessence of the forlorn, staring down into the bottomless well of metaphysical abandonment, made more acute by the assured and grandiose claims of the title.

I have been familiar with Hamilton-born (now Melbourne based) artist, Richard Lewer’s work for a long while, but it wasn’t until I recently walked into Weasel Gallery in Hamilton, and saw examples of his mainly figurative work on display, that the comparison with Edvard Munch sprung to mind.

Why has it taken me so long to recognize this? It could be that I’m a slow learner, or alternatively the reason may lie in the fact that he has added another layer of anguished juice to these new pieces; especially one standout painting with an extended title taken from the Book of Common Prayer, 1662: Earth to Earth, Ashes to Ashes, Dust to Dust; In the Sure and Certain Hope of Resurrection to Eternal Life.

This wild and brooding scene depicts two faceless priests officiating at a funeral, by an open grave. It is the treatment of the setting with the two lone figures that raises this small but unsettling painting’s existential temperature. Edvard Munch would have been pleased to have pulled this one off.

The whole atmosphere is dense with something that reaches well beyond sadness. We are confronted with the quintessence of the forlorn, staring down into the bottomless well of metaphysical abandonment, made more acute by the assured and grandiose claims of the title.

The priests are made to look pitiful, blown about by what appears to be an unforgiving storm brewing in the background, their cassocks and stoles curling in the wind whose gusts are delineated by a cacophony of rough brushstrokes. A lone, dark and leafless tree (this is winter), adds to the bleakness, while the only prominent green colouration is seen in the artificial turf placed in narrow bands either side of the open grave, a grim, opaque slab of black.

The priests look like bits of detritus tossed about in a meaningless vortex, deplete of spiritual value. In the context of a graveside funeral, the sense of cosmic homelessness is made all the more poignant. Lewer does not spare our feelings, provide saving grace or room to hide, in an image that captures the truth of Nietzsche’s chilling pronouncement made all those years ago.

The predominant form is the swirl that recalls Munch’s seminal painting, The Scream. Lewer merely hints at it, but the allusion, even if understated, is enough to provide a similar sense of despair—a howl of anguish at the human condition. We are ephemeral creatures without “certain hope” and the artist has captured the pathos in this powerful, albeit diminutive work.

Lewer attends to the pitifulness of life from another direction in an animated video. Worse Luck, I Am Still Here is a deeply affecting and sensitively constructed five minute drama played out using an old fashion overhead projector with multiple transparencies. This is deliberately low-tech and all the more effective for that. Lewer manually manipulates the ink drawings of the transparencies and every so often the camera pulls back so that we see him working the apparatus, reminding us of the mechanism involved.

The drawings are simple, roughly configured, line illustrations and these collaged formats come together to reveal the tragic scenario of an elderly couple, the wife suffering from a debilitating illness, which forces them to engage in a suicide pack that wretchedly doesn’t go completely to plan.

Accompanied by a softly spoken commentary, small animation elements are incorporated into the visual narrative accompanying the layered transparencies. The result is heartfelt and touching. The cruelty of the end of life, graphically portrayed, sees message and means come together in a mutually enhancing manner.

The other paintings in the show are more personally orientated, less fraught and emotionally charged, (celebration of birthdays and holy communions) yet rendered in his inimitable style - faux naïve, with a touch of an expressionist palette.

We are deep inside a Roman Catholic enclave here and Lewer negotiates the vicissitudes of this world with an assurance and measured aplomb.