Searching for a Waikato Regionalism 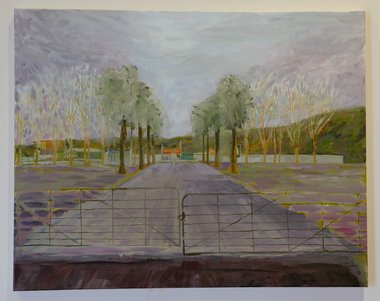 What Croucher achieves with all of this is the creation of a new regionalism, a return to the form, but with an edgy difference, one that sees it updated in part, alternatively made gritty or made romantic, stripped down or cloaked in a softened haze of yearning.

In 1925 Edward Hopper painted his pivotal work, House by the Railroad, a canvas that spawned a whole legacy of material that explored urban city living, employing architectural elements as his props. The predominant mood was modern languor and world-weariness, and the method was a kind of loose regionalist impressionism. This was done during a time when abstraction was in vogue, thus he was working entirely against the grain. However, although utilizing conservative means, he broke new ground in other significant ways via his practice.

Another more contemporary artist who works in the same tradition is Hamilton painter, Tim Croucher, Wintec tutor in Media Arts. Croucher knows the lie of the land, is acquainted with all the latest art theories and every current avant-garde move that’s ever been made, but has chosen to follow in the same conservative fashion as the mid twentieth century American. Like Hopper, he brings to the landscape genre a new tone, a bite and quirkiness, an angle that few have traversed. Sometimes that angle is literal, as in Waihou Park-up, which employs a birds-eye view of the subject, looking down from a great height, drone-like, at a sprawling expanse of terrain, a vista that takes in the gaping mouth of a river, leading off to a panoramic picture of mountains in the distance.

Yet this is not your bog-standard New Zealand celebration of the sublime, the beautiful or picturesque. There is an oddness to this piece, an unexpected element in the mix first hinted at in the presence of a large boat, a steamer, which appears to be listing heavily against the bank of the river. And then there is the presence of several cars parked up in what looks like a nearby paddock.
The nature of the vehicles suggests this is some ‘clandestine’ meeting of a group of hoons ready to burn some rubber or generate deep-skid doughnuts. The incongruity is striking and deliberate. It reminds me of George Baloghy’s reworking of Charles Heaphy’s Mt Egmont to the Southward (1839), with Christopher Perkins’ Taranaki (1929) plonked in front—with a couple of Holdens and a tar-seal road.

Croucher, however, is not being cynical or ironic. He wants us to take this straight. This is twenty-first century reality, a bunch of feral youths, Westies, parked up and hanging out in some remote location with their 70’s Ford Corollas, dwarfed by the vista, an expanse normally reserved for artists like John Gully or Rita Angus.

The offbeat nature of the thing is enhanced by the reductive palette—harsh viridian greens and scrubbed metallic blues. This is not a warm Woollaston where soil browns have been soaked in a sun-drenched earth, but rather something doused in vinegar. The eerie unsettling feel it gives off has to do with the fact that here is where urban grunt meets topographical sublime, sitting just this side of casual angst.

A companion piece in an adjacent gallery underlines the nature of this hybrid species. Burnout Dream puts the car (souped-up V8), centre stage and engulfed in blue smoke; but a large part of the work is taken up with a brooding backdrop of dark green hills that retreat into the distance, themselves smothered in a smoky haze melting into a sombre twilight sky. It is reminiscent of Hopper’s famous Gas, with its petrol attendant closing up for the night, the viewer positioned near the rear window of a departing car, twilight creeping in on a lonely spot on the edge of town.

Croucher includes a huge towering floodlit advertising sign that hovers mysteriously over the scene like some visiting UFO. Hopper likewise incorporates a Mobile gas signage in his piece, spotlighted against a darkening forest.

While the American does ennui, Croucher evokes something more virile, masculine and throaty. And yet there is captured here a kind of spiritual vacancy, as city and moody countryside face off in a confrontation that leaves a trailing sense of vacuity in its wake. Burnout become a metaphor for spiritual lassitude in a world more aware of finite resources, waste and planetary care. The artist, however, seems to occupy an ambiguous position, somewhere between celebrating the energy of this muscle car ‘dream’ while casting a critical eye across it.

Included in the show are also some works that Croucher has collected over the years. Here they make pertinent references to his own paintings. Robert Rapson’s 1972 Chevrolet Monte Carlo, 2006, is germane, a roughly configured small ‘toy’ (ceramic) model of the car, complete with blonde haired passenger, locks streaming in the wind as she leans out the open window. This lumpy red and white creation exudes kick-arse energy and would fit inside Croucher’s landscapes with alacrity.

Croucher delights in taking us to places overlooked and deemed unworthy of attention, like the gates of a drag strip at Meremere. With judicious use of colour (purple and blue) and heightened construction of symmetry, he transports this banal and unprepossessing site into a location with dignity and presence.

And yet, again, something about the line of stately trees that form a guard of honour along the road, clashes with the tawdry nature of the locked entrance way. Cheap and nasty farm gates sit at slightly different heights, as if ill hung, so that the beauty of the scene is undercut by the shoddy.

Croucher also likes to paint architectural forms - domestic houses from differing periods, set on hills, beside rivers, on slight rises. The standout piece in the show would be Finial, (acrylic on paper), an image of a late nineteen century villa positioned deep in the New Zealand pristine bush, embedded in its landscape, timeless, iconic and delineated with deft brushstrokes. Like most of these, the perspective is looking up from a position well below the building, the angle providing them with stature, but also in this case, mystery and aura. People are seldom included. The house is the personality. Here it is suffused with a primal, idealistic quality, evoking a place where Rousseau’s Noble Savage might once have roamed.

What Croucher achieves with all of this is the creation of a new regionalism, a return to the form, but with an edgy difference, one that sees it updated in part, alternatively made gritty or made romantic, stripped down or cloaked in a softened haze of yearning.
This competing duality is reflected in others in Croucher’s collection. On the one hand there is road kill—a blood splattered hare by Joanna Braithwaite, or a car careering over a cliff by Richard Fahey—while at the mellower end of the spectrum there is Helen Dowling’s naïve and enigmatic landscape, From the Other Side of the World, or Tracy Croucher’s Spa Park Girls, an idyllic summary image of modern young women besporting themselves along a lush river edge, the dappled water recalling Monet’s ebullient treatment of the same.

Tim Croucher, it appears, wants it both ways, somewhere around here in the Waikato region.