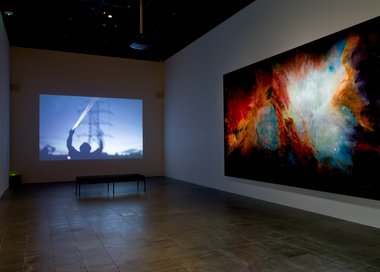 In a sequence of darkened rooms on the ground floor of Christchurch Art Gallery Te Puna o Waiwhetū, this small but dramatic show explores the aesthetic and symbolic possibilities of radiating, reflected and refracted light—using a wide range of media from nine artists. Almost all works have projected light in some form, though not necessarily from within the artwork itself.

Most of the (largely sculptural) items here have light projected through them—that light is an essential part of the work. However a couple of more conventional contributions—a oil painting by Saskia Leek and a suite of hei tiki photographs by Fiona Pardington—have spot lights projected onto them making their inclusion seem a bit forced. They represent a different sort of physicality, for they normally don’t need environmental darkness to function. They are quite separate in image-making method from the others.

Anila Quayyum Agha‘s Shimmering Mirage exploits shadows, and so here does Andrew Drummond’s Device for Shadows and Reflection—though normally not solely. Agha’s suspended metal cube with its projected shadows alludes to the intricate lattice traceries found in mosques which only men and boys can experience. It seems to reference also the decorative henna patterns middle-eastern women sometimes have painted on their hands and faces. Drummond’s shiny brass work, here in comparison, references more the history of kinetic sculpture—artists like Lye (his films and sculpture) and Moholy-Nagy.

Some artists use light projection in an extremely mysterious way. Joe Sheehan has a carousel filled with translucent pounamu and jade slides, casting a sequence of eighty enigmatic and evocative murky images onto the wall. Daniel von Sturmer has a programmed robot that moves, in a jerky fashion, a constantly changing line up of glowing shapes around a dark room, forcing us to consider the space as a kind of container.

Examining Kentaro Yamada‘s project is like peeking into a letterbox or out of a gun emplacement. Contemplating evening skies on the outer edge of his piece of horizontal Perspex becomes uncharacteristically voyeuristic. Gemma Smith’s Perspex crystalline form is technically related (featuring refraction), but much more sculptural in its radiant pulsing mass, with coloured light streaking out of the large prismatic ‘boulder’ and across the nearby walls.

Perhaps the eeriest work is the video of Joyce Hinterding and David Haines gesticulating at night with glowing disconnected neon tubes that have been charged up by the presence of nearby transmission towers, activating the mercury gas and phosphor coating. Ritualistic and seemingly dangerous with the two looming and moving, shadowy artists, Encounter with the Halo Field is the unsettling highlight of this quite magical exhibition.