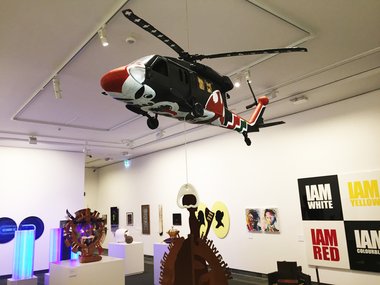 The title of the show refers to the puhoro pattern, symbol of speed, strength and dexterity, and it is the latter that features prominently in those works where innovation and invention take customary forms and reinvigorate them with a modern twist. Ideas, both spiritually and politically pertinent to Maori, also employ novel and energetic ways to speak to a new generation of people in a voice that is strong, insistent and clear.

The title of the show refers to the puhoro pattern, symbol of speed, strength and dexterity, and it is the latter that features prominently in those works where innovation and invention take customary forms and reinvigorate them with a modern twist. Ideas, both spiritually and politically pertinent to Maori, also employ novel and energetic ways to speak to a new generation of people in a voice that is strong, insistent and clear.

The works selected collectively confront issues to do with the past, (colonial history and its legacy), as well as looking beyond to the future in terms of art practice and commentary. The theme of resistance and the politics of colonisation takes pou position in the gallery space, strategically positioned to greet the entering viewer.

Donn Ratana’s (Ngāi Tūhoe) installation, Weapons of Mass Colonization: 1840-2020+, takes us back to the events of settler invasion. He has appropriated and painted black ammunition shell-case boxes, inside which are placed wooden survey pegs, inscribed with, “Lot 1, North Island. Lot 2, South Island.” A small skull is stencilled on the side of one of the boxes to accentuate the point. The installation is a clever reusing of period military hardware that deals with issues to do with the New Zealand Land Wars, land confiscation, along with Native Land Court practices involved in the process of colonisation.

Just across on the wall, opposite the ‘Weapons’ installation, is Aimee Ratana’s (Ngāi Tūhoe) wool hanging, Rua Kenana’s Arrest, Maungapohatu, 1916. Here again a shameful episode in New Zealand history is being mined for material, an event involving the Maori prophet, Rua Kenana, who like Moses, led his people (a thousand of them) out to the mountain (Maungapōhatu) to form a religious community in the Ureweras—before being arrested and arrayed unceremoniously before the courts on a minor charge. His imprisonment in 1916, spelled the collapse of the Maungapōhatu community, the dismantling of the temple, and the disillusion and scattering of his followers.

This textile work employs a large woollen blanket as a ground for the artists’ cut-out felt pieces depicting, in symmetrical form, the silhouetted images of elements from this tragic narrative. Representations of the temple, native birds, clubs and diamond shapes (symbols Rua used to adorn the outer walls of the temple), along with images of the constabulary and pistols are included in this apt medium that alludes to the musket and blanket trade for land from earlier colonial history.

Positioned nearby is Brett Graham’s Iwi Slayer, which deals with the same historic episode. The image of a gun-toting member of the armed constabulary that invaded Rua’s community is played out large in a lightbox, complete with a text that ironically appropriates the language associated with anti-terrorism. In this ‘wanted’ poster, Graham has also referenced by name and logo a prominent local Waikato firm as a ‘sponsor’ for the campaign to eradicate the ‘bandits’.

Humour can be an effective means of making ones political point without all the heavy didactic finger wagging, and Asher Newbery does this in his slightly comical piece, Tūhoe Airforce 3. His large plastic model helicopter, suspended in the air and covered in various Maori motifs, conveys the political missive with a lighter touch that travels in both directions—back to the past and forward to the present, recalling the Tūhoe Raids of 2007.

In the same section of the gallery, the general theme of racial contention continues with Robert Jahnke playing with a well-worn phrase (often employed by white liberals to demonstrate their liberalness) for the title of his piece: Some of My Best Friends are Coloured. In this text-based work, the black and white “I AM WHITE”, recalls McCahon’s famous ‘I AM’ paintings, but here the words act as racial markers with an undertone of unease.

In this stainless steel, heavily lacquered work with a Pop Art aesthetic, we are left with an interesting dialectic and a touch of ambiguity. Colour/culture is significant in terms of identity - I AM RED, I AM YELLOW, but at another level, “colour blindness” becomes a virtue that speaks of equality irrespective of hue; or alternatively, becomes a vice if implying ignorance when it comes to cultural difference.

The issue of identity of a different kind is presented by Pati Solomona Tyrell in his choreographed photographic work, Mātua (parents). In this staged photograph, the artist’s parents sit alongside their son (who identifies as queer) in a gesture of solidarity, wearing traditional ceremonial Samoan headdress. They are positioned, somewhat incongruously, inside a Skyline garage against the closed door, its triangular bracing, framing and uniting the sitters.

The unprepossessing setting serves to signal that we are in New Zealand where the artist resides, but his Samoan lineage speaks volumes in the voluminous crowns he and his family wear. As part of the LGBTQ community, he is a proud prince of his ‘heterodox’ distinctiveness while his mother and father are happy to validate their son and his gender preference, working to provide a balance to the usual “Christianised-Pacific heteronormative expectations” in this performance piece.

Crowns also feature in the work of Maureen Lander with her whimsical take on the crown of King Tāwhiao. This ‘re-imagined’ diadem made up of pingao, harakeke, muka (flax and grass), together with fabric and gold tassels, looks suspiciously like the Imperial State Crown wore by Queen Elizabeth 11, thus making its point in a charming yet ironic fashion.

Moving further into the gallery we leave the overtly political polemic behind and encounter the video work of Kaaterina Kerekere, a digital motion graphic piece that cleverly plays with abstract animated lines that recall tube train maps associated with the London Underground. These morphing forms blend and merge with architectural shapes of the whare whakairo.

The work is entitled Takuahiroa, but it goes beyond the ‘reclamation of indigenous motif(s)’, in this case, the koru, and takes us to a place where the hybrid resonance reverberates with new and engaging energies.

This encounter with the avant-garde is a vital exercise, since certain traditional Maori art forms, like the koru, are in danger of being overused to the point of becoming clichés.

Ngataiharuru Taepa is well known for his work in this area with the reinvigoration and rejuvenation of kowhaiwhai panels in particular. The koru is his speciality and his work, Te Tini a Pitau, a timbered construction, is a prime example of reworking the traditional form. What he has done, (like Michael Parekowhai in Kiss the Baby Goodbye), is participate in an act of re-appropriation. Gordon Walters initially appropriated the koru form and abstracted it. Parekowhai returned the favour and took the abstraction back into the Maori domain with his steel kitset creation. Taepa continues that work of reclamation and applies it here, using a different medium, (wood relief panels), employing subtle colour differences to depict pods and tree formations.

Dorothy Waetford goes a step further with her ceramic work, Inner Piece. She has created a completely abstract biomorphic 3D clay sculpture, minimalist in colour, textural in surface with contemplative properties. Looking part canoe anchor, part bone implement, the curved upright structure has a quite totemic power that few clay creations achieve. The form has echoes of Barbara Hepworth, but Waetford comes at the shape from a unique angle, invoking a sacred presence related to Io, the original creative source of all things that exists at the core of Maori mythology.

Taking shapes from the Western alphabet, the artist has created two separate pieces which form the shape of A and U. Placed together, they create the letters i and o, the name of the Maori concept of the Supreme Being. From another viewpoint, combining the letter a with io, we get āio, meaning to be calm and at peace. The language of form here literally engages with spiritual ideas in a bold and striking format.

Another who pushes the forms toward complete abstraction is Maioha Kara. Her work salutes both carving and weaving but in a completely radical way. On large sheets of oiled birch or rimu ply wood she carves, with a router, small holes or divots, that are composed in symmetrical patterns and into which she places coloured glitter. These luminous stars or glow-worm pods of light (Te Ao-Marama) are symbolic of the source of energy for emerging life, both for the creative artist and symbolic for the well-being of the community at large. Called Christmas Tree, these novel tukutuku panels of laced light, provide a counterpoint to the earlier works of post-colonial denunciation.

Light, luminosity and its link to the energy which animates all things, (mauri), is something explored by Tai Kerekere, in his glass lightboxes, streaming with iridescent blues, black and purple. Entitled Vessels of Knowledge - Legacy, it too embraces a more contemporary abstract format in order to rework traditional ideas that tap into universal Maori cultural systems of knowledge.

These are but a small representative sample, a selected look across the exhibition numbering over one hundred different works, all of which help give some sense of where indigenous art is at the moment.