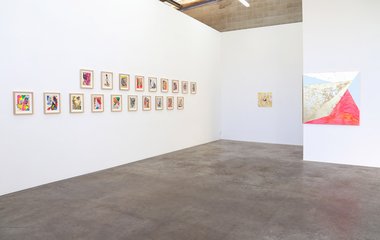 Polke comes through in Parkes' invading (seemingly arbitrary but carefully arranged) visual disruption, its cynicism of art and culture as constructs, and the collapsing of the Hegelian dichotomy of Culture-Order-the Work versus Nature-Chaos-Madness into a singularity where they are all the same thing. Parkes' collages share with Polke's process-based images an exuberance deceptively resembling nature like (as did the Rococo) evolving organisms.

The title of Parkes’ exhibition, relationship status, is a highly suggestive one. The ambiguity of relationship status is an obsession of the twenty-first century. Marriage is no longer to be assumed by default, and if it is, it may be open or monogamous, heterosexual or homosexual. Is X celibate? Is Y aromantic or asexual? Is Z polyamorous? One may or may not be single, but still be available, and vice versa. Relationship status is signalled across multiple social media platforms in the search for wholeness.

But more than that—with a nod to Susan Sontag’s assertion in “Against Interpretation” that what we need is an erotics, rather than a hermeneutics of art; and another nod to the American philosopher Stanley Cavell and his observation that we interact with art works as though they were human beings—that relationship status may well extend to artist, art object and audience. In relationship status Parkes works through a checklist of painterly and romantic/erotic types.

The later italian painting collage series is a delicious set of small framed collages that refract the Rococo through the prism of the late Sigmar Polke. The Rococo sensibility comes through in the substrate of pictures clipped from the pages of Tancred Borenius‘ well-known book of the same title: essentially Italian painting from the sixteenth to eighteenth centuries, Titian to Tiepolo. The atmosphere of courtly but disposable erotic play; the silver and gold foil and rose; and the perspective of voyeuristically peering into these delicate loci amoeni through layers of material, as though into a grotto that we may not ourselves enter.

The Soviet sociologist Vladimir Friče described the French Rococo painter François Boucher as “catering to a decadent class that wasted its store of vital energy, its physical and psychological health—the class that was capable only of idly and frivolously fluttering around and above life.” This one might argue is also apt of love in the ruins of endgame capitalism.

Polke comes through in Parkes‘ invading (seemingly arbitrary but carefully arranged) visual disruption, its cynicism of art and culture as constructs, and the collapsing of the Hegelian dichotomy of Culture-Order-the Work versus Nature-Chaos-Madness into a singularity where they are all the same thing. Parkes’ collages share with Polke’s process-based images an exuberance deceptively resembling nature like (as did the Rococo) evolving organisms.

The superficial appearance of abstraction invites (or lures) the viewer into participating in the Romantic-Modernist tradition of the Sublime, and yet this is all conducted at a geographical and chronological remove, for what are the Rococo and Sigmar Polke to Miranda Parkes in 2020, and what is she to them, or they to each other?

In french kisser, Parkes takes Alan Maddox’s grids of negating crossings-out—a side-eyed acknowledgement of her relationship to Canterbury Neo-Expressionism—and filters them through a Pop sensibility. Voila! They become cartoon kisses at the bottom of a billet-doux. This again emphasises Parkes’ intellectual depth and playful wit that underlies the lightness of touch. The problematic masculinities of modernism and Maddox are subverted.

Parkes, however, is more than capable of marshalling the grab bag of modernist formalism to her own ends. The large work tinder, a reference to the dating app, consists of a grid of green, red and clear Perspex tiles, raggedly gilded or silvered on the back. Some of the pattern consists of flipped tiles so that the metallic surface faces the viewer. If the tiles are like smartphone screens, then maybe the flipped ones have been swiped one way or another. It is difficult not to think of Byzantine mosaics:

That is no country for old men. The young
In one another’s arms, birds in the trees,
—Those dying generations—at their song…

In mister piggy, Parkes indulges in a quasi-throwback to her sculptural use of her painting supports earlier in the 2000s, but this time by means of an objet trouvé, a palpable readymade in the form of a compressed wood packaging pallet. The title refers to the bulging snout-like forms of the pallet’s reverse, the volumes, push and pull of which Parkes defines with day-glo hues. A similar architectural conceit, literally this time, can be found in gatecrasher as it bends around the corner of abutting walls, defining the geometry of the space.

More experimentally, with a triple twist on Action Painting, Process-Based Abstraction (in a good way, not in the “Zombie Formalist” sense) and even a little Joseph Beuys, is the small work brass in pocket (after the Pretenders’ song). Its basis is a piece of paper embossed by asphalt, having been run over on the road. Technically one should probably call it printmaking. Such opportunism is to be applauded. 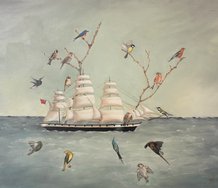